Since my Gavin is also a Black Lab this story caught my eye.

The life-saving skills of a black Labrador have earned him a top medal in the British Army, Sky News reported Wednesday.

Nine-year-old Treo's job is to sniff out roadside bombs in Afghanistan for soldiers, and he has proved rather good at it.

In August, 2008, while working as a forward detection dog in Sangin, Treo found a "daisy chain" improvised explosive device (IED) - made of two or more explosives wired together - that had been carefully modified and concealed by the Taliban at the side of a path.

A month later, his actions saved another platoon from guaranteed casualties, again by finding a daisy chain IED.

Now he is being rewarded with the Dickin Medal - the animal equivalent of a Victoria Cross - the highest accolade for a military animal.

Sgt Heyhoe said, "Treo's work involves searching for arms and explosives out on the ground to the forefront of the troops.

"It's very important. We are part and parcel of the search element. We're not the ultimate answer but we are an aid to search. Another aid would be the metal detector - but Treo is a four-legged variety."

Sgt Heyhoe says their relationship is now far more than a working partnership.

"Basically, me and the dog have got to understand each other and without that we can't be effective on the ground. He must know when I want him to go somewhere to search.

"Everyone will say that he is just a military working dog - yes, he is, but he is also a very good friend of mine. We look after each other."

Treo is the 63rd animal to receive the Dickin Medal - introduced in 1943 to honor the work of animals in war - and the 27th dog to receive the honor.

Since its introduction it has also been presented to 32 World War II messenger pigeons, three horses and one cat.

Best dog I ever had was a black lab named Belle. My grandfather ran a dental laboratory called Belco Laboratory. We named Belle after the business - Belco Lab ;)

They are amazing animals! Great story!

Have you guys ever heard of Chips the war dog? http://www.trivia-library.com/a/amazing-animals-chips-the-dog-world-war-ii-hero.htm

Chips was a sentry with the U.S. Army 3rd Infantry Division. The 1st war dog to be sent overseas in W.W. II, he arrived in Sicily in July, 1943, and accompanied his division in fighting in Africa, Italy, and other parts of Europe. It was in Germany that he performed a heroic feat. One night, he broke away from his handler and attacked a German pillbox. He actually seized one man and forced 4 more to surrender. The Army awarded him the Purple Heart and Silver Star. Later, officials took these honors away because they were "contrary to Army policy." To make up for it, his company presented him unofficially with a battle star and campaign ribbons. Chips was discharged from the Army in 1945 and returned to his owner.

Teufel said:
Have you guys ever heard of Chips the war dog?
Click to expand...

I've never heard that! Thanks for posting it!
8

The military order of the purple heart presented "Lex" a military working dog with a purple heart when he was wounded during a rocket attack that killed his handler.

They stopped giving dogs purple hearts in WWII because they said that it took away from the award but I don't agree. Maybe they should create a US system of K9 awards like the brits have.
8

If he or she is serving, then any injury to the K9 during battle should be Purple Heart worthy. I agree.


I just love dogs. It's a weakness of mine.

8'Duece said:
If he or she is serving, then any injury to the K9 during battle should be Purple Heart worthy. I agree.


I just love dogs. It's a weakness of mine.
Click to expand...

I for one dont view that as a weakness.:2c:

Commonwealth dogs serving can also hold rank (or at least used to).

I know of one donkey in the British Army who was charged and demoted for dropping a turd on a parade ground during a ceremony. lol

There was a dog that served with the New Zealand Expeditionary Force during WWII.
He was wounded during the battle of El Alamein and died of sickness in Italy.
Held the rank of Major and was named Major.

US military working dogs are traditionally one rank higher in grade than their handlers. This is meant to discourage any abuse towards the animal as they outrank their handlers.

How could anyone abuse this guy huh?;)
Look at that face!

Cool story! My 2 year old Black Lab is sleeping with her head on my foot right now!!!
7

This is mi hermano, Eddie C., with "Chipper"...Chipper sniffed out booby traps for us. He was worth more than his weight in gold, as are all wardogs. 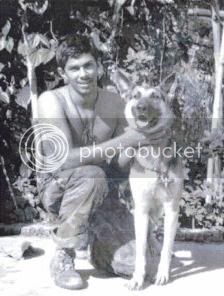