The engineers at the Defense Advanced Research Projects Agency (DARPA) are working on an aircraft that’s capable of landing on the water and submerging beneath the waves.


DARPA hopes to design a vehicle able to hold 8 people with a flying radius of 1000 nautical miles and a submersible range of 12 nautical miles. The vehicle will not have deep diving abilities but rather will likely snorkel just under the surface.

Below is a video of a vehicle which could resemble the DARPA vehicle:

The U.S. Military is seeking designs for a new weapon that could be in a James Bond movie - a flying submarine.

While Bond drove a Lotus that turned into a sub when it hit the water in "The Spy Who Loved Me," what the Defense Advanced Research Projects Agency, or DARPA, wants is far more ambitious.

Their specs call for a submersible flying machine capable of carrying eight men and their equipment a combination of 1,150 miles by air, 115 miles by sea, or 22 miles underwater - in less than eight hours. It must have the "stealth of a submarine" and be able to hide beneath the water's surface for up to three days to pick up the men after their "coastal insertion" mission is completed. "We are open to submissions from anywhere," DARPA spokeswoman Jan Walker said. "DARPA has a budget of $3 billion."
Click to expand...

Give technology a few decades and fiction becomes reality!

Be interesting to see this how this one pans out; not sure if the technology exists yet. Your looking at a metal stronger then aluminum, but lightweight (titanium?), maybe a composite material.
L

Voyage to the bottom of the sea was an awesome show!!

Then there's the SKUNKWORKS program. Skunkworks created the SR-71 Blackbird, and the F-117A Stealth Fighter, among other technological marvels...

Lockheed Martin’s Skunk Works, famed for the U-2 and Blackbird spy planes that flew higher than anything else in the world in their day, is trying for a different altitude record: an airplane that starts and ends its mission 150 feet underwater.

The Cormorant, a stealthy, jet-powered, autonomous aircraft that could be outfitted with either short-range weapons or surveillance equipment, is designed to launch out of the Trident missile tubes in some of the U.S. Navy’s gigantic Cold War–era Ohio-class submarines. These formerly nuke-toting subs have become less useful in a military climate evolved to favor surgical strikes over nuclear stalemates, but the Cormorant could use their now-vacant tubes to provide another unmanned option for spying on or destroying targets near the coast.

This is no easy task. The tubes are as long as a semi trailer but about seven feet wide—not exactly airplane-shaped. The Cormorant has to be strong enough to withstand the pressure 150 feet underwater—enough to cave in hatches on a normal aircraft—but light enough to fly. Another challenge: Subs survive by stealth, and an airplane flying back to the boat could give its position away.

The Skunk Works’s answer is a four-ton airplane with gull wings that hinge around its body to fit inside the missile tube. The craft is made of titanium to resist corrosion, and any empty spaces are filled with plastic foam to resist crushing. The rest of the body is pressurized with inert gas. Inflatable seals keep the weapon-bay doors, engine inlet and exhaust covers watertight.
Click to expand... 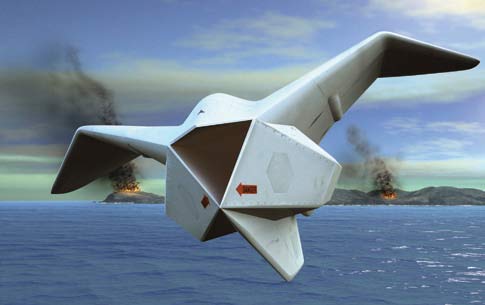 Voyage to the bottom of the sea was an awesome show!!
Click to expand...