Helicopters are about to get SNEAKY

This is pretty cool: 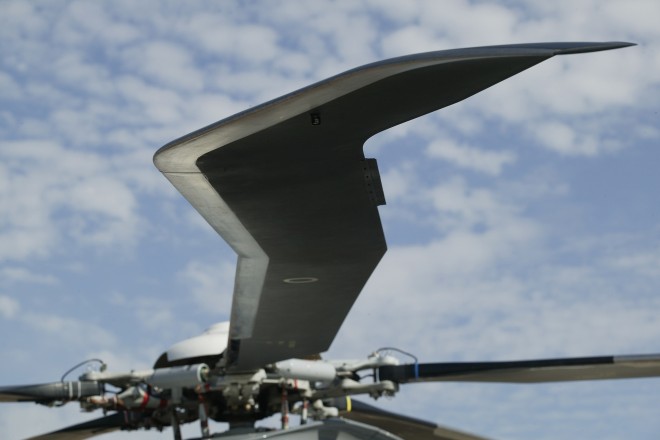 Wired said:
Just about every helicopter operator is quite familiar with noise complaints. Whether it be the local news helicopter or even a medical helicopter, many people on the ground don’t like the sound created by rotary-wing aircraft.

This week Eurocopter unveiled its most recent effort to reduce helicopter noise with the radical-looking Blue Edge rotor blade. The new blade has been tested on one of the company’s EC155 helicopters and was shown to reduce noise 3 to 4 decibels, according to the company.

In addition to the Blue Edge rotor blade, the company also introduced something called Blue Pulse technology. Also designed to reduce helicopter noise, the Blue Pulse system uses three flap modules in the trailing edge of each rotor blade. Piezoelectric motors move actuate the flaps 15 to 40 times per second in reduce the “slap noise” often heard when a helicopter is descending.

You can listen to a cockpit recording of Eurocopter’s EC155 with and without the Blue Edge rotor below.

Normally, the entire length of the rotor blade interacts with the vortex of the preceding blade. With the Blue Edge rotors, the double-swept tips of the rotor blade reduce the length of the blade-vortex interaction, and it does it at the tip where the blades are moving the fastest relative to the air. The result is a decrease in the sound produced due of the wake interaction at the tip.

Both the new rotor blade and trailing edge flaps are part of what Eurocopter is calling its “Bluecopter” technology. The company says the goal is to create more environmentally friendly helicopters from both a noise and emissions standpoint. We reported on Eurocopter’s plan for a fuel-efficient diesel helicopter on Wednesday.

No confirmation from Eurocopter, but in avoiding putting the “green” label on their efforts, the company appears to be borrowing from everybody’s favorite movie helicopter legend, Blue Thunder. The 1980s cinematic masterpiece features a helicopter made by what is now Eurocopter, an Aérospatiale Gazelle. And one of the helicopter’s most impressive technologies was its “whisper mode” that allowed it to fly around as quiet as a glider. Could just be a coincidence.

Only 3-4 dB? I guess that's better than nothing.

No confirmation from Eurocopter, but in avoiding putting the “green” label on their efforts, the company appears to be borrowing from everybody’s favorite movie helicopter legend, Blue Thunder. The 1980s cinematic masterpiece ...
Click to expand...

It had occured to me once upon a time to question the logic of riding into a contested area on a machine that announces its presence to the enemy well in advanced of its visibilty to him, has no armor to speak of, and goes slow enough so any nitwit with a rifle can score a hit. But at the time of that revelation, I was not in a position to voice objections to the doctrine...not that anyone would have heard me if I had.

Since we are going to keep doing stuff like this, making them a bit less noisy might be a step in the right direction.

Fuck it, bring back the Huey.

The noise of those birds gives me a hard on everytime! :cool:

Thanks, I'm having a flashback. Here's one out the door of the slick, Rte One, Quang Nam Province, when I was but a wee lad.

Speaking of noise, I could never figure out why a C-130 was so quite sometimes when taxiing and at other times not.

Hueys are my bird of choice.
Great snap 7point62.

Queens Cadet said:
Speaking of noise, I could never figure out why a C-130 was so quite sometimes when taxiing and at other times not.
Click to expand...

We have some -130 guys here who can maybe help, but I think it has to do with the pitch of the blades.

Helicopters are about to get sneaky? Are you sure some aren't sneaky already? ;)

Funny, the article doesn't mention the effect on lift.

Freefalling said:
We have some -130 guys here who can maybe help, but I think it has to do with the pitch of the blades.
Click to expand...


That does effect the overall noise level, but the noticeable change you get standing there when the plane taxis by has more to do with the angle you face the propellers from. It's far quieter from behind the props than in front of them. You'll notice that the most and the plane of the props passes you.

The MD-600N Notar is pretty damn quite for a helicopter.

3-4db decrease hardly seems worth the effort. Powering the helicopters w/ diesels will greatly reduce noise levels as compared to turbines, but it will be a few years before there is a diesel w/ appropriate power-to-weight ratio for a med/large helicopter.

T
I need guidance from people I want to be like. (Contractor related)

Z
6 weeks to get contracted for Navy Diver. What are my options
2 3