(Taken from another Board)

LOUISVILLE, Ky. - A Shelby County man and his wife said two doctors amputated the man's penis without his consent, and have filed a lawsuit.

According to the lawsuit, Philip Seaton went to have a circumcision last October. Seaton said when he woke up from the procedure, he realized his penis had been amputated. ( :eek: )

Seaton has suffered mental anguish, pain, and has lost the enjoyment of life, according to the lawsuit.

I would sue too. I would want the opportunity for one last hoorah and to at least say goodbye.

That has go to be a HARD thing to swallow.

Loss of enjoyment of life is a fucking understatement.

The lawsuit also claims the plaintiff did not consent to general anesthesia.
Click to expand...

Any surgery I've ever had they didn't give me much choice...it was go under or don't go through with the procedure.

WTF were those OR nurses thinkin'? Have they never heard of a "time out" to confirm what the case is? Having the patient verbally confirm whats going to be done? And what about what was signed for on the surgical consent?? Yeah if this is true, there were LOTS of mistakes made.
8

I might cut off one of my fingers for a million bucks or two, but there is no price tag high enough for my manhood. :cool:

At least they didn't throw it out of the window of a moving vehicle for the police to have use a search light to find it.

I wouldn't be suing... I'd be murdering.

Well he can have it replaced with something bigger, I'm sure the wife wont mind.

Thats a unforgivable fuck up by the hospital staff.


Well dick for a dick in this case, those doctors would need some real security protecting them...

I'm not buying that cancer thing, I've certainly heard of testicular cancer but never on the penis for heavens sake let the patient know. I mean it wasn't life threatening at least within the next day or so, so why not confirm with the patient. He would have thought twice if it was his own. Course wasn't there a recent case were a surgeon removed the noncancerous testicle and the guy and his wife had wanted to have children. Ugh...suing isn't going to make it right. Course Bobbitts plastic surgeon was excellent wonder if he has a solution

The bright side is that he can wear a size smaller underwear. 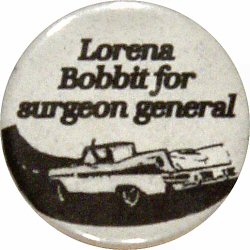 His pecker "came and went" at the same time. :doh:
H

pardus762 said:
Well he can have it replaced with something bigger, I'm sure the wife wont mind.
Click to expand...

He probably doesn't use one of his arms that much

My cock's like a baby's arm holding an apple!

To expand on pardus's explanation of himself:

crab apple and baby's arm at 1 month through an ultrasound

hey... you're the one in the medical forum bringing a pencil eraser to a scapel fight.
D

Consider yourselves warned; don't ever piss me off.
S

Why, we'll get on the rist?

Determination keeps Ranger on the line