Prototype is gas operated with short-stroke piston and rotating bolt. Weapon uses standard M-16 family magazines. All switches, charging handle, and shell ejector are ambidextrous. There are two variants under development- bullpup and classic layout. Rifle is designed to be used with GPBO-40 grenade launcher.

Info and pic from REMOV:
The research & development programme called MSBS-5,56 (Modulowy System Broni Strzeleckiej kalibru 5,56 mm - Modular Firearms System of 5.56 mm calibre) will be finished in the December 2010. In the meantime the Polish MoD will have to decide which design is better suitable to the Army - classic one or bullpup. Next step for the future manufacturer (Fabryka Broni Lucznik-Radom) is to create the whole assault rifle family based on the standard model - carbine, light automatic/sniper rifle. It will takes, with all factory and military tests, about three years (2011-2013). So, if the MoD will be interested in the new, modular assault rifle family, the new firearm can be introduced to the Polish Army around 2015-2016. 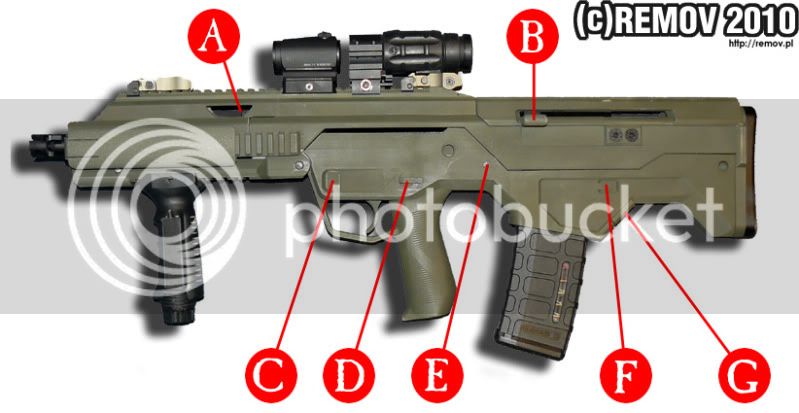 The Gen. 2 bull-pup one looks alot like a Tavor, and the other Gen. 2 one looks like a Masada.

Anyone else see a resemblance?

B
A Special Kind of Weapon: Micro-Tavor (MTAR) Assault Rifle

A Brief History of Cartridge Design