Operation Medusa: The Battle For Panjwai

I think this side of the story needs to be said and this is written very well.

This is enough explanation from the text below, lost a lot of great men.


Operation Medusa: The Battle For Panjwai
September 1, 2007, by Adam Day 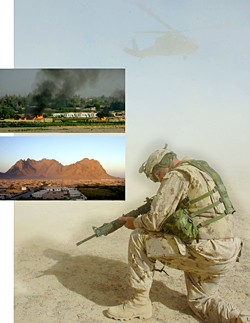 PHOTOS: DND; CHARLES COMPANY; ADAM DAY
A Canadian soldier ducks as a helicopter lifts off during Operation Medusa. Inset top: across the Arghandab River, the area around the white school burns as the Canadians attack. Inset bottom: the town of Bazaar-e-Panjwai with Mar Ghar in the background.
Click to expand... 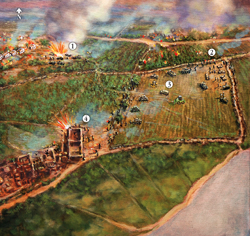 ILLUSTRATION: DAVID CRAIG
An overview of Objective Rugby during the battle. 1: Near the white schoolhouse, 7 Platoon is caught in a deadly crossfire where Rick Nolan and Shane Stachnik are killed. 2: Afghan National Army soldiers and their American trainers attack to the north, toward route Comox. 3: The main company position, site of the Zettlemeyer attack that kills Frank Mellish and William Cushley. 4: Dismounted from their LAVs, 8 Platoon assaults a series of compounds.
Click to expand...

Email the writer at: aday@legion.ca
Email a letter to the editor at: letters@legionmagazine.com
Click to expand...

I have some friends who fought in OP Medusa, they said it was some of the best and worst times of their lives. Good bunch of men. 1 RCR should get a battle honor for what they did and endured.

ProPatria said:
I have some friends who fought in OP Medusa, they said it was some of the best and worst times of their lives. Good bunch of men. 1 RCR should get a battle honor for what they did and endured.


That was a rough season of fighting for all of 2 Bde I think. And you are right, 1 RCR should get a battle honor or something. I know it's not the only battle of significance during this shitty war and I don't think there's been enough recognition for the actions committed by our Brothers and Sisters.

I agree. A friend in my platoon from TF 1-10 was in 'The crazy 8's' Charles Coy during OP Medusa and he told me at the end of the tour that we had a much busier deployment then they had on 3-06. Different time and different enemy TTP's though.

That being said, each member of the 1 RCR BG from 3-06 will live in infamy for many years to come for the hardships they lived through in that god forsaken desert.

... and it's stil a shit hole, as of last year it still was anyway. Some people you just can't reach.

Remembering some good soldiers lost to this shit hole. We should have carpet bombed it.

Well written but a hard read...because it's hard to read about good men lost. RIP and Hand Salute to the fallen of 1 RCR...but congratulations for killing a shitload of those bastards during this op.