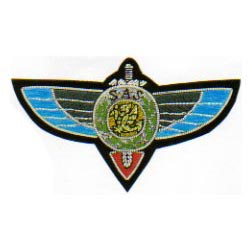 History of the 1er RPIMa

The 1er RPIMa is the inheritor of the traditions of the two Free French Special Air Service (SAS) Regiments that served with distinction alongside their British brothers-in-arms in the SAS Brigade during World War Two. The Free French SAS were among the very first to join Sir David Stirling's newly created unit in Kabrit, North Africa in 1941 and they took part in the epics of the SAS in Africa, Crete, France, Belgium, Holland and Germany, earning many French and foreign awards in the process (including many British Distinguished Service Orders, Military Crosses and Military Medals). Today, this SAS heritage still shows in the regimental motto" Qui Ose Gagne" (Who Dares Wins) and in the award of the RAPAS Wings, a badge reminiscent of the wartime SAS "Operational Wings" which can only be awarded to 1er RPIMa members after they have successfully met a set of stringent requirements including operational deployments.

After WW2, the 1er RPIMa took part in the war in Indochina between 1945 and 1954, performing several of the more than 160 combat jumps carried out by the French paratroopers during that conflict. After the war, the regiment underwent a structural change and became a training depot for the whole of the colonial airborne force. As such, it did not take part in the conflict in Algeria. It remained in the training role until 1974 when the 1er RPIMa was again transformed, this time into a Special Forces unit, a role it has kept until today.

The regimental colours of the 1er RPIMa are decorated with the US Bronze Star Medal, the Dutch Bronze Leeuw and the Belgian Croix de Guerre as well as many French orders including the Légion d'Honneur and the Croix de la Libération.

Part of the French army's Special Forces Brigade (BFST), the 1er RPIMa is a modern, highly skilled and experienced Special Forces unit organized along company lines. The main strength of the regiment lies in its three RAPAS companies (RAPAS standing for Airborne Research and Special Action) each specializing in a specific field such as HAHO/HALO, Counter-Terrorism, amphibious, jungle, mountain or motorized patrols operations and in its RAPAS Signal company dedicated to the C3 support of Special Operations. The 1er RPIMa also fields a Training and Operations company which is in charge of providing the selection, initial and continuation training of the unit's manpower and a Logistics company which supports the regiment in its daily and operational undertakings.

The 1er RPIMa is one of Europe's most experienced Special Forces unit, having been constantly engaged in operational deployments from the date of its re-rolling over thirty years ago. It benefits from an exceptional location in Bayonne, South West of France. This positioning makes all sort of training (amphibious, mountain.) possible. It is also ideal as it is very close to the Centre d'Entraînement Adapté (CTA), Europe's largest and most modern Close Quarter Battle (CQB) facility and to the dedicated assets of the French army's Special Forces Aviation Detachment (DAOS) and airborne school (ETAP), two establishments that are essential to its training and operations.

The list of its recent operations shows a world-wide commitment since it ranges from Afghanistan to Africa and the Balkans. The acknowledged expertise of the Regiment is such that in recent years, many prominent European countries have trusted it with the evacuation of their nationals in war-torn countries. The trust of those countries has never been misplaced and the 1er RPIMa has put out of harm's way hundreds of EU and other nationals in the recent past.

Similarly, since the beginning of its involvement in Operation Enduring Freedom in Afghanistan, first in 2001 and then again from 2003 on, the Regiment has won high praises. The commitment of its members has been rewarded several times by the American forces in the form of Bronze Star, Army Commendation and Army Achievement Medals. The high level of experience reached by the 1er RPIMa also makes it a highly sought-after partner in the development of Special Forces units abroad and the Regiment constantly receives requests for assistance in that field from sister units around the world.

Always the first to deploy, the 1er RPIMa is at the tip of the spear of France's defence; constantly on the lookout for new solutions and opportunities, it remains faithful to the motto of its SAS ancestors, "Who Dares Wins".

Thanks for posting that, learn something new everyday
G

I have found that short video... Too bad, no sound.

Videos like that make me want to reenlist lol
G

In the text, we have to read 1622 instead of 1762 but this is not important. The picture is the gold RAPAS insigna. It is a reward. You can gain it with your experience inside this unit. You got bronze, silver and gold insignas.

here is the unit insigne.

here is the insigne of A company.

Here is the insigne of B compagny.

Here is the insigne of C compagny.

Here is the insigne of training and operations company.

Here is the insigne of signal company.

Here is the insigne of the service and support company.
Last edited: Oct 3, 2013

the same movie but with the music on dailymotion. This clip has been made in order to promote french SOF. You only see army SOF in this movie.
B

Thanks for posting that, very interesting.