Duncan Shuler already was among the best of the best when he crossed the finish line at Camp Pendleton this month, his muscles cramped and eyes glazed.


Shuler
The 22-year-old Westlake High School graduate not only completed the 25-mile grueling competition at the Marine Corps base, he came in first, confirming what many already knew about him.

The competition, which the Marines call the Recon Challenge, is the toughest contest in the Corps, say current and former Corps members.

“I can only describe it as brutal,” said Roger McGrath of Thousand Oaks, a former member of the Corps reconnaissance force.

Shuler is a member of the force, which is sent behind enemy lines for numerous missions, including gathering intelligence. One of its mottoes is “shoot, move and communicate,” said Gunnery Sgt. Vinny Marzi, an instructor and reconnaissance team leader in charge of the challenge.

McGrath has known Shuler for years and was on hand to see his tired friend cross the finish line May 8. He said Shuler excels at everything he does, whether it’s playing water polo, working as a lifeguard in Ventura County or serving as a U.S. Marine.

Shuler rose “rapidly through the ranks” after joining the Corps in August 2007 and was promoted to sergeant this month, McGrath said.

Shuler completed the Recon Challenge some 12 hours after starting early in the morning with teammate Sgt. Adam Sorensen. Through much of the race, Shuler never really knew if he and Sorensen would finish, let alone win it. The competition began at dawn with a seven-mile run and walk to the ocean.

The two were not in the lead when they arrived at shore. Once there, they swapped their boots for fins before completing a two-kilometer swim with their equipment, including 50-pound packs. At that point, Shuler and Sorensen were in the lead.

Shuler is not only a top swimmer but also a first-class water polo player, competing for Ventura College as a student. He also worked as a lifeguard before joining the Marines.

The next part of the challenge included a lung-sapping climb up a ridge that borders Interstate 5 near San Onofre State Beach. Along with other contestants, Shuler and Sorensen climbed numerous ridges that day.

“It seemed like it was never going to end,” Shuler said, recalling walking over ground that was so rocky and loose that one misstep could have meant injury and disqualification.

The contestants then ran through an obstacle course twice, taking apart and reassembling a machine gun and conducting a live-fire shooting drill.

During the final, one-mile leg of the race, each contestant had to carry about 40 pounds of water, in addition to their 50-pound packs and other equipment.

By this time, Shuler and Sorensen had been on the course for more than 12 hours. Shuler said crossing the finish line was “one of the best feelings I’ve had in life.”

“During the whole race, you didn’t know if you were going to finish, and we’d finally done it.”

Of the 14 two-man teams that started, only eight finished.

The skills Shuler used to win the competition will serve him well once he’s sent overseas on a mission, he said. Shuler knows the dangers he will likely face but is not fazed. He said he knew he wanted to be a Marine after he spent 10 days at Camp Pendleton at the age of 16 during a program for teens to promote physical fitness and discipline.

“I liked the physical aspect of it,” Shuler said, “of pushing yourself, of getting up early in the morning.”

After graduating from Westlake High, he attended Ventura College for a semester and then Moorpark College for a year-and-a-half. Then he decided it was time to pursue his dream.

“I did not want to spend the rest of my life knowing that I’d passed up the chance of doing something I really wanted to do.”
7

Anyone else attending the Recon Challenge on Camp Pendleton this year? 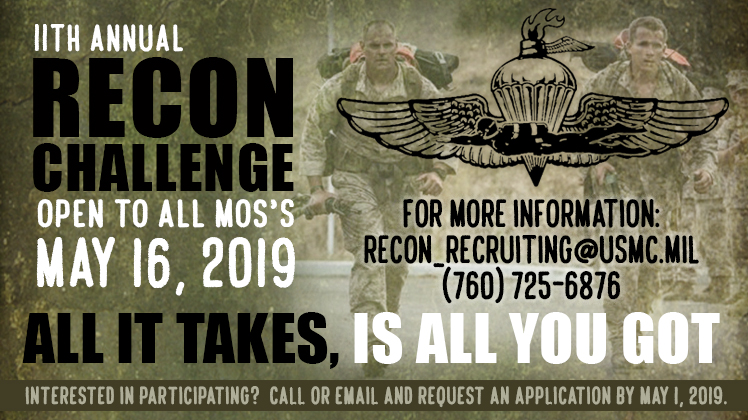 The after party this Friday is open to community friends & family: