This is a down and dirt ball smokin qual I tweaked from a SDM qual, I have never been able to shoot it clean.

Range set up: KD range with firing points from 500 to 5 yards/meters, ability to run between points and fire from the prone, sitting, kneeling and standing positions. F type target set up in the impact zone.

Course of fire: Shooters will fire from distances of 500 to 5 yards/meters; this course of fire will include firing from each position, running to the next firing point assuming a shooting position and firing the next stage of fire. Magazine changes will take place between varied firing points, students will have 5 magazines loaded with 12 rounds each. 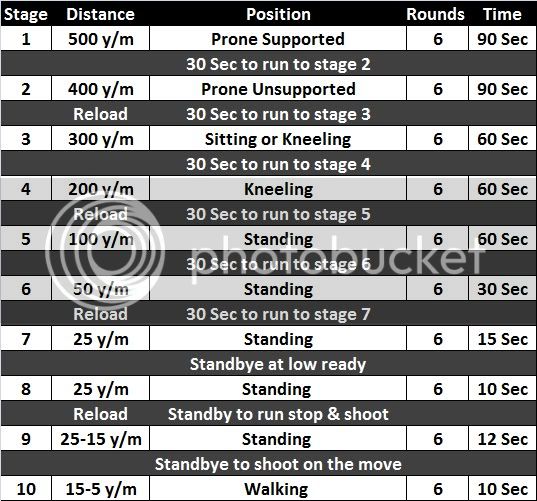 Scoring: The shooter must achieve at least 2 hits on the target scoring area from each stage in order to become qualified. The scoring system will be based off of an F type target consisting of a V ring, 5 ring, 4 ring and a 3 ring. Each round that impacts the target will be recorded by the ring number of which had impacted. Out of a possible 300 points that can be scored the following will determine the shooter classification level.
EXPERT 261-300
SHARPSHOOTER 221-260
MARKSMAN 180-220
UNQUALIFYED 179 or less

Purpose: The purpose of this course of fire is to train the shooter to use multiple shooting positions and maintain proper use of the fundamentals of marksmanship under physical stress. The course of fire is designed to be extremely physically demanding and pushes the shooter to apply heavy focus on sight alignment and trigger control, while ignoring being out of breath, having a high heart beat rate and being physically stressed.

I'm a big fan of Kyle Lamb's 100m and 50m aggregate for carbine. 10 rounds each standing, kneeling, then sitting for 50. 10 rounds each kneeling, sitting, then prone for 100m. I like his "heros and zeros" scoring, shoot it on a 25m NRA pistol target- 1 point for a round in the black, nothing for a miss. Bullseye scoring is too nat's ass for combat marksmanship- it doesn't matter if you hit someone in the cheek, or hit them in the nose- if you smack em in the head with a bullet, they're probably out of the fight and you're moving on to the next target (or getting high fives).

edit- I'm pretty sure it's 1 min for both course, I've got them in my range book.