The only terrorist to escape alive when the SAS stormed the Iranian Embassy in London 28 years ago will be freed from jail within days for a life on benefits.

Fowzi Badavi Nejad was told he had been granted parole on Tuesday - and assured he will not be deported back to his native Iran because of human rights laws.

Instead, in a decision last night attacked as 'utter madness', he will receive hundreds of pounds every week in free housing and benefits.
Trevor Lock, the policeman held hostage in the siege, told the Daily Mail he had written to the Government objecting to Nejad's release, but this had been ignored. 'He shouldn't be allowed to stay in this country,' he said. 'He will be living off the UK taxpayers.'

The move also risks causing a diplomatic row with Iran, which has demanded the 50-year-old's return so that he can face trial for the murder of two hostages during the siege. This would lead to an inevitable death sentence. The threat of capital punishment is why his lawyers have been able to argue that he must stay in Britain.

He and five other terrorists forced their way into the Iranian Embassy in Kensington in April 1980, taking 26 hostages. The gang were demanding independence for a part of Iran and the release of comrades.
Click to expand... 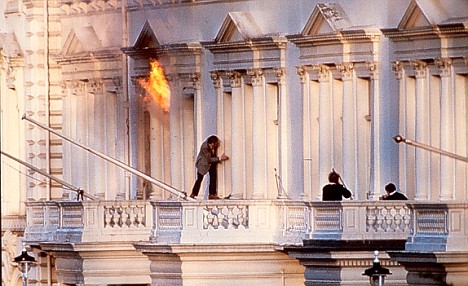 Man that is amazing!!!

Where Fowzi Badavi Nejad originally from? He should be deported to his home country at the minimum. Personally I say hand him over to the Iranian's!

Which makes a interesting note to this! Shouldn't he have been tried in Iran anyhow since the Embassy is Iranian Sovereign Territory?

Fuck Iran,
I see it as a snub to the Iranians. He's a terrorist, who hit a country that has killed hundreds of our guys, so Fuck Iran.

That operation was, as I recall, a tremendous victory for the SAS; and the operators drank shots with PM Thatcher afterwards... :cool:

Being able to live on "The Dole" coupled with high taxes has killed work incentive in Great Britain, IMO...
7

Maybe some old retired SAS guys can make this bastard disappear and save the taxpayers a few pounds.

They should have given him 2 choice.

2) Your freedom and deportation to Iran.

Why is he able to receive such benefits?

rv808 said:
Why is he able to receive such benefits?
Click to expand...

"I survived making a terrorist attack and all I got were these lousy benefits."

The move also risks causing a diplomatic row with Iran, which has demanded the 50-year-old's return so that he can face trial for the murder of two hostages during the siege. This would lead to an inevitable death sentence.
Click to expand...

The UK has be in steady decline since WWII this is just one more example of that, great shame...

7point62 said:
Maybe some old retired SAS guys can make this bastard disappear and save the taxpayers a few pounds.
Click to expand...

I imagine some Iranian guys may be paying him a visit.

Give Mac a call, I'd bet he has and old score to settle with this guy....

pardus762 said:
The UK has be in steady decline since WWII this is just one more example of that, great shame...
Click to expand...

Spot on. As FF says, welcome to the great nanny state

Mac's got a good 'stache.

Isn't/Wasn't Johnny Adair on some sort of government pension too?

digrar said:
I imagine some Iranian guys may be paying him a visit.
Click to expand...

The siege was a protest over the Ayatollah Khomeni. It's reasonable to assume that there may be a soft knock on the door. To send him home can mean he won't make it down the stairs onto the tarmac. He's done his time and may be receiving benefits that any ex prisoner would receive under the circumstances. :2c:

Something tells me he will *cough* trip *cough* while sun bathing in the near future...

Gah. I hate this kind of crap.

Honestly some of these lawyers are as bad as the criminals that they defend... The guy straight up killed hostages and people think that after some prision time he's all set to go? The guy is an extremist and shouldn't have any rights... The second he fired a round into a hostage was the second the tossed any kind of rights out the window... There should be no protection for people like that and its absurd for any working tax payer to carry those burdens.. They are leeches of society and don't deserve a dime.

There was a terrorist attack in Germany today, and the MSM is practically silent

The Siege of Jadotville