On the night of the 20th of November 1970, the North Vietnamese were treated to an aggressive demonstration of Pres. Nixon’s concern for the welfare of US prisoners – the raid on the Son Tay POW camp. Although no POW's were rescued (the enemy had moved them to other facilities), the raid serves as a model of a well-planned and -executed joint special operation.

Although the problem of compartmented intelligence prevented the raiders from knowing that they were most likely going into an empty prison, they believed that the effort was worth it anyway. 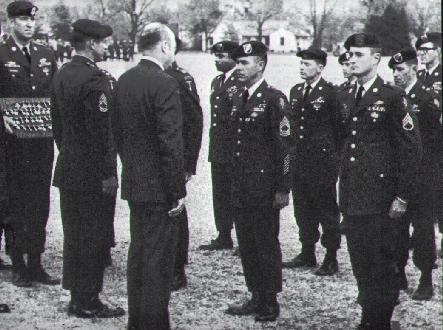 These guys/this mission set the standard by which today's SOF operate.

I can tell you the fact they went and tried was a great moral booster for both the captives and the people fighting.
What a great time when action came before the press release or the second guessing command post live stream video.
I owe you all a great deal past and present.
Respectfully,
Bill

Heroes, every last one of them. With respect.

I'm surprised that Col. Grimes isn't in there somewhere.

It's interesting how many of those guys I met in the course of my SF time...
The real stand outs were Simons, Meadows, Jake, Joplin, Jurich, Roe, Tapley and Martin.