Soldiers awarded after the raid

Got to love the BULL!

Good pictures. Ravage, do you have any way to identify the men in the photographs?

Gona do some resarch.

Anyone remember the name of the old Ret. Sargent Major down at CDQC (he was one of the raiders). He was the one who would skip breathe and clean the pool
R

I used to work with a Keith Medinski, who was a young guy on the raid. A great guy. A lot of co-workers didn't belive he was in it, so he brought in some pics, some medals, and the book of the mission with his name in it. It was funny to watch the faces of the other guys. :doh:
R

Last summer I got to meet an officer who was on the Son Tay Raid. He was an OCSer as well, and explained the entire situation from the selection process to the aftermath. Great man, and it was an honor to hear it from his mouth.

I have had the honor and privlege of meeting Bud Sydnor and Dick Meadows.

Col. Sydnor was at a conference I was attending when we met. Maj. Meadows was the father of an outstanding Ranger and CO I worked with - Mark Meadows.

Mark was cut from the same piece of cloth as his father. An outstanding and consumate, quiet professional, who exemplified the Ranger Creed in every sense of the word.

Funny how no matter what the war, what the uniform, Soldiers preparing for battle all look the same.....

Very cool and rare pics. Thanks
8

Even then they where mounting funky optics on the carry handle of the CAR-15. ;)

Even then they where mounting funky optics on the carry handle of the CAR-15. ;)
Click to expand...

Agreed on the pics.

So OMFG Delta wasn't the first to get the fancy toys

I've seen a couple of them before, including the one with Col. Simmons smoking the stogie.

Nothing beats a cheap cigar, except a good cigar after you've completed your mission.
8

Freefalling said:
Agreed on the pics.

Procurement jockeys sitting on a swivel chair and picking their nose.

82ndtrooper said:
Procurement jockeys sitting on a swivel chair and picking their nose.
Click to expand...

No, Army infantry types not willing to try something new, coupled with the "they are too expensive" comments from the five sided warriors.

There is a good book, The Raid IIRC. Must read for any SOF professional. 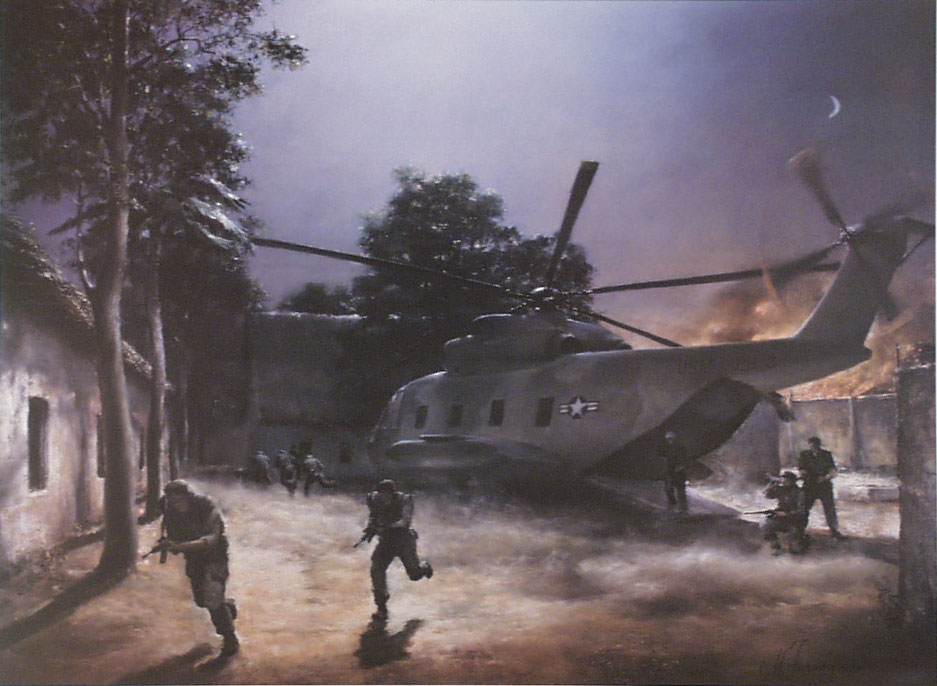 The Son Tay Raid, Blue Boy Element", is a tribute to one of the most daring military exploits ever executed by American soldiers. The soldiers that conducted the raid were the famed United States Army's Green Berets. They conducted the operation in such a flawless fashion that it has become the model that is still taught by the senior tactical schools in most Armies around the world. These seemingly fearless soldiers did not have to participate in the raid. From the legendary Colonel "Bull" Simmons to the most junior sergeant they voluntarily put their life on the line against incredible odds in order to rescue fellow soldiers, sailors, Marines, and Airman from the Son Tay prison compound. Mikhail Nikiporenko was flown from St. Petersburg, Russia to Fort Bragg, North Carolina, to capture the dramatic moment seconds after the assault group in the H-3 helicopter known as Blue Boy crash landed in the compound. Mr. Nikiporenko's painting is a masterpiece of art. His utilization of reflected light and shadows mark "The Raid" as one of the most poignant and collectable pieces of military art ever painted. Unframed prints can be purchased for only $165.00 including shipping and handling. Framed prints can be purchased for only $315.00 plus shipping and handling. Frames are real of real cherry wood. Prints are double matted and all materials are acid free.
Click to expand...

Mark Meadows was my PL back in the day, never heard what he moved on to. He had big boots to fill.