The veteran in the photo had four stripes on his sleeve, the crimson beret of a combat controller cocked jauntily to one side of his head and rows of ribbons on his chest.
He looked so familiar to Tech. Sgt. Jon Wilcox, just like an airman who Wilcox worked with a few years ago at Langley Air Force Base, Va.
Something wasn’t right, though. The caption on the picture identified the airman as Anthony J. LaTorre, but the LaTorre who Wilcox knew was an airman first class, not a staff sergeant, and a crew chief, not a combat controller.
Wilcox decided to check out the story posted above the photo on the website of Palm Beach State College, which identified LaTorre as one of its students.
The story told how the university recognized five former service members at a Veterans Day concert last year. LaTorre, according to the article, represented the Air Force. He said he served six years, from 2004 to 2010, deploying three times — to Baghdad and Fallujah in Iraq, and Kandahar, Afghanistan.
LaTorre’s claims outraged Wilcox, who sent an e-mail to Air Force Times laying out what he knew about his former co-worker.
“It saddens me deeply to know that we in the Armed Forces have all been disrespected and our efforts cheapened by the outrageous actions of this individual and those like him,” Wilcox wrote in an e-mail he sent to the Military Times Hall of Valor, an electronic database of 57,500 valor award citations.
“We, his fellow service members with whom he served …, have been contacting numerous outlets in the Palm Beach area in an attempt to bring to justice this fraud,” Wilcox continued. “I am reaching out to you for the same reason; I only hope that my words don’t go unheeded and that the true heroes of our nation’s military can hold their heads a little higher knowing that false representation of a decorated military hero will not go unpunished.”
Air Force Times verified with the Air Force what Wilcox remembered about LaTorre: He maintained the F-22 Raptors at Langley, his only assignment; earned three service ribbons and no personal achievement awards; and separated early — in 2008, not 2010 — under less than honorable conditions after being disciplined several times.
LaTorre, 24, did not return several messages left by Air Force Times on his cell phone. A man who identified himself as LaTorre’s brother answered a call made to LaTorre’s last known address in Delray Beach, Fla.
The brother, Todd LaTorre, told Air Force Times that LaTorre, also known by T.J., had taken a job servicing jets in Saudi Arabia. He left no contact information, according to the brother.
“Whenever someone tells him a story, he integrates it and believes it as if he did it,” Todd LaTorre said when told about how LaTorre misrepresented himself. “He tells it with great accuracy.”
LaTorre had sought help but never accepted his inability to distinguish his experiences from someone else’s, according to the brother.
“He’s in denial,” Todd LaTorre said. “He’s a real good person, but he has no idea of what he’s doing.”
Asked about the crimson beret, Todd LaTorre told Air Force Times that it belonged to his father.
“I don’t think it was intentional,” the brother said. “It’s sad. I pity him. He has a 3-year-old daughter to support and I don’t want to see anything happen to him.”
Anthony LaTorre’s deception stunned one of the organizers of the Veterans Day celebration, which drew a crowd of 500.
“Oh, this is shocking,” Karen Lippek said. “I’m sitting here with my mouth open.”
Palm Beach State, she said, relies on the veterans to be honest about their service. LaTorre’s twisting of the truth put the ceremony in a bad light.
“Now,” Lippek said, “it’s tainted.”
Reports of military impostors are becoming more common, from those who served but inflate their records to those who don’t know the difference between a soldier and a Marine.
In his run for U.S. Senate last fall, former Connecticut Attorney General Richard Blumenthal claimed he served in Vietnam; his record showedhe spent his Marine Corps days as a stateside reservist. And Robert W. Levy resigned as mayor of Atlantic City in 2007 after he lied about being a Green Beret.
“Lying about one’s service record or claiming heroism where none exists — these serve only to steal the respect and honor from those who have earned such respect for their dedicated service,” remarked Mike Dunn, a retired lieutenant general who heads the Air Force Association.
To deter fakers, Congress passed a law five years ago making it a federal crime to falsely claim —verbally or in writing — any service medals or awards.
The law, called the Stolen Valor Act, has been challenged in court on First Amendment grounds. Those accused of making false claims contend the statute infringes on free speech. Two rulings have sided with the fakers; two have upheld the law, according to Doug Sterner, a decorated former Army sergeant and the curator of the Military Times Hall of Valor.
The number of fakers continues to grow, according to Sterner, but authorities are less than enthusiastic about prosecuting someone under a law that may be ruled unconstitutional.
“Only one out of 10 cases I’ve referred to the FBI has been dealt with,” he said.
Sterner said he believes the solution is a military awards database where claims can be quickly verified. The Military Times Hall of Valor, though, is far from complete, listing a little more than one-10th of the 500,000 military awards above the Bronze Star issued throughout U.S. history.
“It’s a huge job,” Sterner said.

Dudes fucked, will probably lose his current gig and generally be unemployable.

he was pretty stupid, and a few other sites on afforums mentioned his ribbons etc were all wrong, and he did not even wore boots in his blues like all CCT guys. 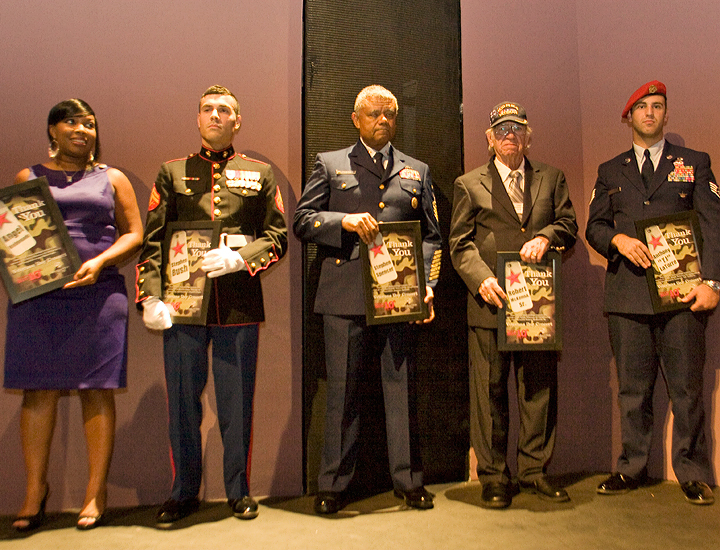 A similar incident happened with myself just before I got out. A photo surfaced of a Marine who used to be in my squad, showing him wearing Corporal chevrons (he was a Lance Corporal) and wearing medals that he did not earn. He had the balls to mount a purple heart, presidential unit citation, combat action ribbon and a naval achievement medal. None of which he had earned. We had to kick him back to the FOB because he was untrustworthy outside of the wire. It was brought up through the chain of command and NOTHING was done about it. I think this Airman has the right idea by putting the information out into the public and throw this piece of shit into the light.

What a douche. It's most likely a good idea if this guy never ever shows his face again. I hope the reports about servicing jets in Saudi is right.

HAH! his MFF wings are upside down and in the spot his dive bubble should be. I'd love to introduce his mouth to a curb.

JustAnotherJ said:
HAH! his MFF wings are upside down and in the spot his dive bubble should be. I'd love to introduce his mouth to a curb.
Click to expand...

i was trying to figure out wtf that was!

JustAnotherJ said:
HAH! his MFF wings are upside down and in the spot his dive bubble should be. I'd love to introduce his mouth to a curb.
Click to expand...

That's probably why that Marine he's in the picture with is scowling, "I can't wait to administer a summarized ass whoopin' after we get off this stage..."

That DBA just looks like a total bag of ass anyway. I remember reading about this and being pissed.