Al-Qaida's al-Zawahiri may be dead 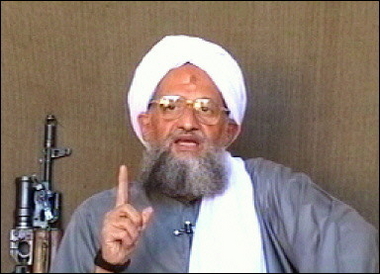 CBS said it had obtained a copy of an intercepted letter from Pakistani sources, in which a doctor is urgently requested to treat the al-Qaida leader.

Al-Zawahiri, who is thought to be in a remote location in Pakistan, was said to be in "severe pain" and his injuries were reportedly infected.

The letter was signed by Baitullah Mehsud, a local Taliban leader, whose seal on the letter was said by experts to be legitimate. It is dated July 29 - a day after al-Qaida weapons expert Abu Khabab al-Masri was reportedly killed in a US missile strike.

While American authorities said they did not know if al-Zawahiri was present during the attack, US officials told CBS that they were investigating reports that he had been killed

My heart bleeds buckets of piss

I'd love it...hope this will be confirmed.
K

Anxiously awaits confirmation of this news! If he is....who's in charge then? LOL

I hope he dies slowly

I hope he lives for months yet.

Slowly and painfully overcome by gangrene and sepsis!

Please AQ, video your martyr dying for allah so we can all witness his martyrdom

And all the Lord's people said: AMEN!

Absolutely FRIGGEN Awesome news..... I hope the source of his initial wounds was a US 5.56 dipped in pig fat..... Die AND deny paradise


the only way to pay for Combat Arms

I think this is the kinda confirmation that we need to get the ball rolling again.

Hope this fucker rots in his own filth...

Wow! You people are so unfeeling.....

I hope it takes weeks, in pain, for this low rent pig fucker to die.

car said:
Wow! You people are so unfeeling.....

I hope it takes weeks, in pain, for this low rent pig fucker to die.
Click to expand...

It's all about the love, all about sharing the love.....

gdamadg said:
It's all about the love, all about sharing the love.....
Click to expand...

This May Be America’s Deadliest Serial Killer With 90 Victims

Fat Man in North Korea DEAD!! Yup, the one you want to be dead.

Data From Seized Computer Fuels a Surge in U.S. Raids on Al Qaeda