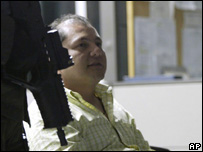 Police have captured a suspected top member of Colombia's biggest drug cartel, following a shoot-out.
Eugenio Montoya, who also is known as Don Hugo, is alleged to be a leader of the Norte del Valle group. He denies being a drug trafficker.
The FBI lists the group as the most powerful and violent drug-trafficking organisation in Colombia.
Mr Montoya's capture has ended a lengthy manhunt in which the US had offered a $5m reward for his arrest.
He was captured in one of the Norte del Valle's strongholds, the town of El Dovio, 200km (125 miles) west of the capital Bogota. Police say no-one was injured in the shoot-out.
In a news conference, Mr Montoya was presented to journalists, surrounded by heavily-armed police.
He denied being a drug trafficker and said he was there to resolve his situation.
Most-wanted
Officials in Colombia say the Norte del Valle cartel became the country's most powerful after the dismantling of the Medellin and Cali cartels in the 1980s and early 90s.
It is believed to be responsible for as much as 30% of the more than 500 metric tons of Colombian cocaine smuggled each year to the US. The cartel is accused of having worked with right-wing death squads to protect its valuable drug routes. Norte del Valle is alleged to be jointly run by Eugenio's brother Diego, who sits alongside Osama Bin Laden on the FBI's most-wanted list.

NEW YORK (Reuters) - A Colombian drug ring that smuggled $7.5 million of cocaine and heroin into the United States was shut down on Tuesday with the arrest of 117 of its suspected members, the U.S. Drug Enforcement Administration said.
Among the cache seized by drug agents was 55 kilograms of heroin, 173 kilograms of cocaine, $260,000 in cash, 12 vehicles and nine weapons, said John Gilbride, special agent for the DEA's New York office.
A federal grand jury in Manhattan has charged 10 of the suspects, including alleged ringleader Ismael Jimenez-Sanchez, a Colombian citizen, with conspiracy to import heroin, U.S. Attorney Michael Garcia said.
If convicted, each faces life in prison and a $4 million fine, Garcia said.
The ring, based in Pereira, Colombia, trafficked the drugs through South America and the Caribbean to the eastern United States, where the drugs were distributed throughout New York, Baltimore and Detroit, Gilbride said.
The ring's couriers used various smuggling methods, including swallowing heroin pellets on commercial flights to New York's John F. Kennedy International Airport and stashing the drug in the soles of their shoes, he said.

Good on all the agencies involved. 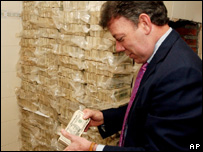 Colombian authorities have seized $54m (£27m) in cash as well as gold ingots from the country's largest drugs cartel in a series of raids.
The cash came from shipments delivered by the Norte del Valle cartel, which Washington says has moved more than 500 tons of cocaine to the US.
The first stash of $19m was found in vacuum packed blocks hidden behind a false wall in Cali.
Three other hoards were found earlier this week around the city.
President Alvaro Uribe said he wanted to congratulate the police for a "great accomplishment".
"This is a positive step toward having a Colombia without rebel organisations, without paramilitaries, without drug traffickers or corruption," he told reporters.
Reports say officials from the US Drug Enforcement Administration accompanied Colombian police on the raids.
Tip-offs
Official sources said the money was a mixture of operating funds and cash put away for a rainy day by the cartel capos.
Police said they found the money and gold as a result of tip-offs.
The BBC's Jeremy McDermott in Bogota says the raids will upset the traffickers, but that the police doubt it will interrupt their drug-running operations.
With 20 people arrested along with the money, the Norte del Valle cartel will now be desperate to find the leak within the organisation and plug it, he reports. The Norte del Valle cartel became the country's most powerful drugs organisation after the dismantling of the Medellin and Cali cartels in the 1980s and early 90s. As the source of the majority of the world's cocaine, Colombia receives potentially billions of dollars each year from the international drugs industry, much of it in dollars and euros.

My Boy Decided He Wanted a Custom Chess Board, So He Built One ***New Photos**