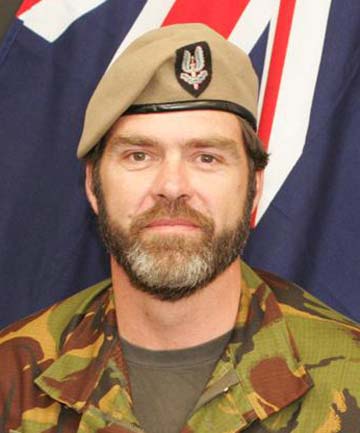 Another New Zealand SAS soldier is reportedly on the way to Afghanistan to replace Corporal Doug Grant.
Grant was killed in the country's capital, Kabul, helping save the lives of three British civilians and two Gurkha security guards.
The 41-year-old SAS soldier from Linton known as "Dougie" died on Friday in a helicopter on the way to a military hospital after an attack by the Taleban at the British Council diplomatic offices.
He leaves behind his wife Tina, their seven-year-old daughter and their five-year-old son.
TVNZ reported that another SAS soldier had been sent to take Grant's place.
The Defence Force today described the events leading up to his death.
Defence Force Chief Lieutenant General Rhys Jones said international forces had received warnings there could be an attack on Friday because it was the 92nd anniversary of the Afghanistan's independence from British rule.
"Therefore most of the city, counter-terrorists as well as police and wider military were on standby for some action to occur. There was no warning of what the target was."
During the attack, the Afghanistan Crisis Response Unit had to focus on countering the terrorists and so the SAS troops were given the task of rescuing civilians from the building, he said.
Grant had gone to the balcony of nearby building to get a better perspective of where the insurgents were, when he was shot by a rifle or light machine gun. "It was probably a 7.6mm bullet."
The bullet went through the arm hole of his body armour, pierced his heart and exited through the other side of his body.
"He probably never would have recovered for the injuries. We know now they were terminal."
However, medics evacuating Grant found a pulse and managed to resuscitate him when they lost it. "When he was was being placed on the helicopter, our understanding was he still had a pulse. When he arrived back at the military hospital... he had died en route.
"Our special forces and our military have world-class medics and therefore the amount of support immediately at the time of his injuries was world-class. The hospital he was going back to in Bagram was a world-class hospital with amazing facilities. If there was a chance to revive him, that was his best chance."
There had been speculation Grant had been shot a 50 calibre gun, but that would have torn his body apart, General Jones said.
While body armour was designed to offer soldiers the best protection, it still had to be functional and enable the soldiers to move and fire weapons, he said. "It is a reality of the battlefield environment that he was caught by someone firing from his side.
"We are confident that the equipment we have, in terms of the personal protection gear, the body armour, the helmets, other protection systems that we have for our people are world-class."

Grant had spent 21 years in the Defence Force and had served in the Infantry Regiment and with the engineers unit before joining the SAS, General Jones said. He had left the SAS and moved to Linton to spend more time with his family but had asked to return with the SAS to Afghanistan.
He had served in East Timor twice, the former Yugoslavia and was on his second tour of duty in Afghanistan.
The work of the SAS was always dangerous, he said. "This is the reality of military life."
At the request of his family who wanted him back as soon as possible, Grant's body would arrive back in New Zealand on a commercial flight.
There would be a private commemoration in Auckland and Grant's body would lie in state in Linton for a few days. That would be followed by a service at Linton which would be closed to the public.
The Defence Force had made a commitment to do all it could to support Grant's family, General Jones said.
FAMILY STATEMENT IN FULL
"Doug had a wide group of friends from all walks of life. The support and love from all of these people has been humbling.
"Some might wonder why Doug went into harms way; Doug had absolute faith in his friends and colleagues, and what he was doing in Afghanistan. He understood what he was getting into and believed in the goal of training local forces for that country's future.
"He was a determined person, some may say stubborn in his pursuit of his goals while growing up. He wrote in a school essay once that he wanted to be in the SAS; he worked towards that goal from that time onwards and convinced the Army he could do the job.
"Like most kiwi's Doug did not make a big deal about his achievements. He shied away from the spotlight preferring to focus his attentions on his family and getting whatever job he tackled done to the best of his considerable abilities whether it was building a house, being a soldier, or being a husband and father.
"The family is incredibly proud of Doug's achievements as a soldier and as a husband, father, brother, and son.
"Doug was adamant in his determination to keep his work life separate from his family life and we appreciate that while he is now the focus of our country that the media give Tina and the children some private space to come to terms with the fact he has died doing one of the things he loved."
WAYNE MAPP PAYS TRIBUTE
Defence Minister Wayne Mapp today paid his condolences, saying "the highest price has been paid".
"Our SAS are resourceful, resilient and resolute."
Grant died protecting lives and, "for that we should be grateful".
Mapp reiterated that the NZ SAS would not come home before March.
KEY DEFENDS COMBAT
Key has been forced to defend the SAS's combat role in Afghanistan following the first death of an elite New Zealand soldier in Kabul.
The 35 Special Air Service troops based in the Afghanistan capital are mentoring the local Crisis Response Unit but took a lead role in an attack on Friday night at the British Council diplomatic offices.
Key said earlier that the SAS remained in a mentoring role but stepped in when situations became beyond the control of the Crisis Response Unit as happened in an attack on the InterContinental Hotel in Kabul in June.
The Crisis Response Unit remained in control of the operation at the British Council on Friday.
"Our guys were obviously involved and on the scene and the situation again certainly did deteriorate," Key told Radio New Zealand. "My understanding is that (the SAS) weren't at the front of this."
The unit was a 285-member elite team of the 150,000-strong Afghan national police.
"What the SAS are telling me is the capability of the Crisis Response Unit is dramatically improving. They've only been in operation since 2005."
The flag-draped coffin of the elite soldier began its journey back to New Zealand late last night when it was met at Bagram Airbase by Bamiyan provincial reconstruction team chief military officer Lieutenant-Colonel Hugh McAslan.
The soldier was farewelled late last night with a haka by his colleagues.

SAS' INCREASED COMBAT ROLE
The incident on Friday night showed that the Kiwi elite troops increasingly took the lead combat role in Kabul in their capacity as mentors, strategic analyst and political scientist Paul Buchanan said yesterday.
Buchanan said the SAS' supposed role of "mentoring" the Afghan Crisis Response Unit in Kabul hid the truth about their work.
"Mentoring in the counter-terrorism business means entering into combat."
The "strange part" was that, when the Government deployed the SAS in 2009, it told the public that the troops would not be in combat roles and would not be the first in during a terrorist crisis.
"What they would do is train these Afghans and that they, if necessary, would accompany them into situations but allow the Afghans to take the lead . . . What we've discovered now is that [the SAS] take the lead - they're the first guys through the door and the reason is, you have to lead by example.
"I find it a little strange that the Government didn't admit upfront from the point they deployed [that] this is what they were going to do."
Buchanan said the tempo of the Taleban's urban terrorist operation had increased now that the United States had announced that it was going to withdraw its troops, and people could expect to see more incidents such as Friday's.
"The Taleban are supremely motivated, fighting in their own country and prepared to die."
SAS IN AFGHANISTAN

First deployed to Afghanistan in 2001.
The former Labour government pulled the unit out in 2005 after three deployments.
About 70 troops were sent back by the National Government for a fourth deployment in 2009.
About 35 SAS troops are based in Kabul, where their main role is ostensibly to mentor and train the Afghan Crisis Response Unit.

Rest in peace, Corporal.
Sincere condolences to Mac_NZ, and all family and friends.

I can't tell you how many times guys are being KIA by the exposed opening under the armpit...

I first met Doug in 2000 before heading to Timor.

I was a young scrote just posted to a Recon Pl and he was instructing on my helo rappel course. He was a grim looking tattooed man with a handle bar moustache, mullet and of course a tan beret so we were all shit scared of him. He had also been a legend in the Recon Pl which I had just joined. He had just returned from INTERFET and was only too happy to relate his experiences to us and answered all our questions patiently and as well as he could. The SAS states humility as a tenet but in my experience that is not always so with some members. Doug was the example of humility to me and someone I aspired to be like.

Over the years we kept in touch, I bumped into him in Timor and then when he went to Engrs to start his building apprenticeship we were able to catch up once a week or so, mainly so I could pick his brains. I remember seeing him doing duty on the gate and asking him WTF he was sitting there for, he just laughed and said I'm a baggie now mate, got to do the duties as well.

I was shocked when they released the name, I thought he was still with the Engrs at SME. When I last talked to him he was getting ready to build his dream house. He leaves behind his wife Tina and two gorgeous kids, 4 if you count his two huskies that he used to run on a sled around the camp.

I will miss Doug, he was one of the influences on my career and for someone who achieved the things he did, one of the most down to earth and kindest people I have ever met.

One thing I've noticed is that in that official photo he's almost smiling...which usually isn't the case for official photos. Speaks a lot I think.

Sorry for your loss Mac.

Mac_NZ thank you for sharing a bit about your mate, my condolences to you and to all.

My condolences on the loss of a friend and mentor Mac.

Condolences to the family and mates.

Genuinely sorry to hear this news Mac. Prayers out for his family and friends.