Desert One-30 Years Ago

I meant to post this yesterday, but family obligations prevented it.

April 25, 1980: In the early hours 30 years ago, a bold attempt to rescue 53 hostages from the US Embassy in Tehran ended in fiery disaster at a remote spot in Iran known ever after as Desert One.

Three EC-130 ABCCC aircraft were recruited for the operation; tail numbers 1818, 1857, and 1809. The aircraft were some of the few C-130’s that were capable of in-flight refueling and supporting the unique communication requirements of the operation. Code named “EAGLE CLAW”, the entire operation consisted of 44 aircraft at six widely separated locations supporting US forces from the Army (SOF), the Marines (RH-53 crew), the Navy (RH-53), and the Air Force (Combat Controllers and AC/MC/EC-130 aircraft other support aircraft and flight crews).

One by one the RH-53 helos failed, and returned to the carrier. Another RH-53 failure at the forward refueling spot, known as "Desert One", forced a mission cancellation. The helicopters started one final refueling, with the final RH-53 needing to reposition from one refueling location to another. The sand was soft and the RH-53 couldn’t taxi so the crew lifted off for a "hover taxi". The rescue team watched in horror, the helo slid sideways, slicing into 1809 with its spinning rotors igniting a raging fire that killed five US Air Force men and three Marines and seriously injuring five other troops, as well as loosing eight aircraft including tail number 1809.

The bodies of eight brave men were left in the flaming funeral pyre of EAGLE CLAW's shattered hopes.

From the ashes arose the proverbial phoenixes:
JSOC
USSOCOM
revitalized SOF that defeated the Taliban
CV-22 .

RIP Brothers, your sacrafice was not in vain.

Thanks for the reminder. From failure spawned the future of our success we see today. That event was one of the moments that began the changes neccessary to make our military a total fighting force and not a collection of different services.

Eagle Claw directly impacted special ops and Grenada brought those changes to all the services as a whole IMHO.

I think you captured the moment perfectly SOWT

RIP Brothers, your sacrafice was not in vain.
Click to expand...

I remember this very well. And I remember being bitterly disappointed by it. The overall state of the military at the time, in general, was a kind of collective inferiority complex, a feeling that we just couldn't pull shit like this off. We got hammered during Lam Son 719, we watched the Son Tay Raid come up empty and NVA tanks in Saigon...It was post-Vietnam malaise. But thank God for failures and sacrifices like Eagle Claw because it drove home the need for us to get all of our shit in one green ditty bag with regard to Special Operations.

I am fortunate to know several unit plank-holders and Desert One vets. I just met another one at a course I was helping instruct a couple weeks ago. Just a great all-around human being... He offered to bring me as his guest to their reunion in the fall. You can bet your ass I cleared my calendar and won't be taking any TDYs! RIP to the fallen warriors.

From the ashes arose the proverbial phoenixes...
Click to expand...

And also the 160th SOAR. As I understand it there was operational friction between the pilots assigned to the recovery helicopters and the ground forces which contributed to the operational difficulties associated with the eventual mission abort...

Lest we forget. RIP to our fallen, thank God their sacrifices were not in vain.

They had "the guts to try."

A Letter that few seen 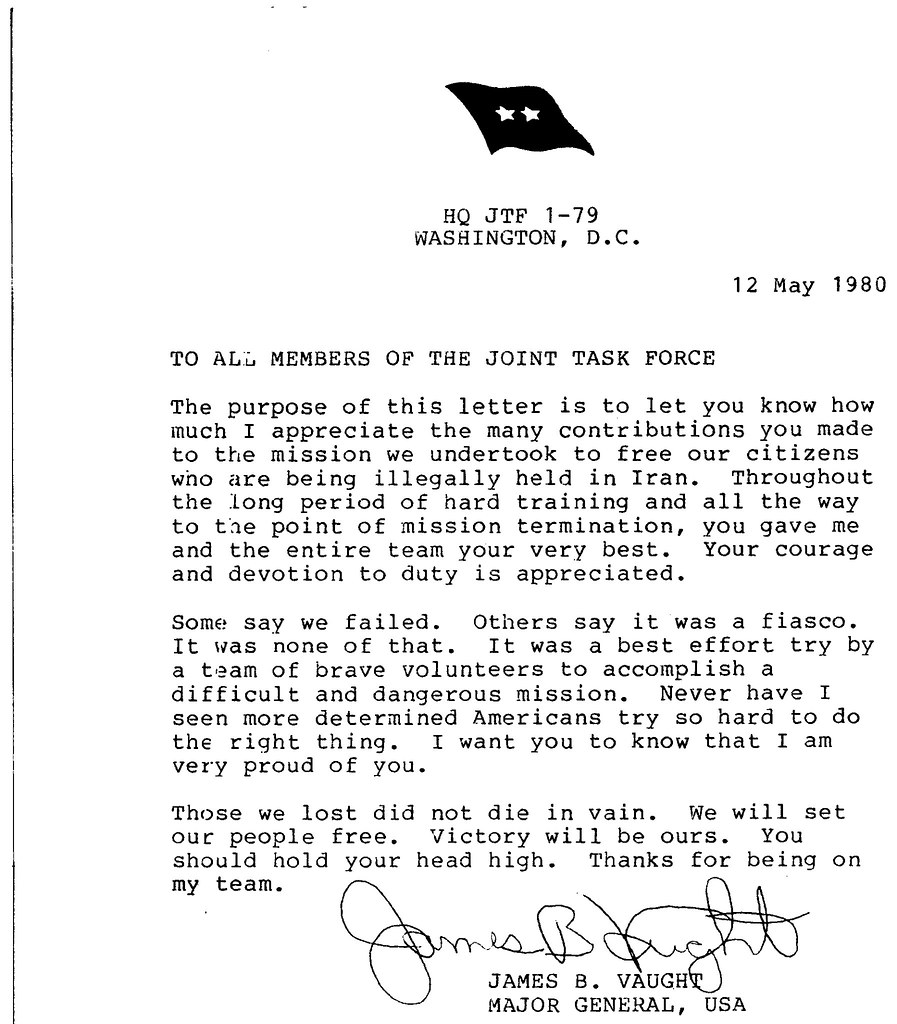 
"It is not the critic who counts: not the man who points out how the strong man stumbles or where the doer of deeds could have done better. The credit belongs to the man who is actually in the arena, whose face is marred by dust and sweat and blood, who strives valiantly, who errs and comes up short again and again, because there is no effort without error or shortcoming, but who knows the great enthusiasms, the great devotions, who spends himself for a worthy cause; who, at the best, knows, in the end, the triumph of high achievement, and who, at the worst, if he fails, at least he fails while daring greatly, so that his place shall never be with those cold and timid souls who knew neither victory nor defeat."

Thank you guys for what you did for us all.

Thank you guys for what you did for us all.
Click to expand...

X2. The mission carried with it incredible risk. I really appreciate the willingness to attempt so challenging a rescue, and am deeply sorrowful at the loss of life and equipment that resulted.

It's sad that it takes something like Desert One to break through the bureaucracy, stereotypes, and rice bowls and do what needs to be done for our country.
8

Can't say anymore than what has been said. Thank you guy's for your sacrifice.

I vaguely remember this. I was 16, in highschool and remember it on the news that night. Had no idea who, what or where Desert One was.

I've known now for quite a while.

Thank you for posting that letter, Snaquebite.

Because of Desert One I have the best and most satisfying job I have ever had working for Col. John Carney and the Special Operations Warrior Foundation. On a larger scale we now have an integrated Special Operations force that should be feared by our enemies and honored by our countrymen.

Marauder06 said:
It's sad that it takes something like Desert One to break through the bureaucracy, stereotypes, and rice bowls and do what needs to be done for our country.
Click to expand...

Robert A. Heinlein made an interesting observation through the mouth of Lazarus Long about "progress": "by the time you learn how to do something, it's too late". But we must make progress somewhere or we'd still be swinging in trees. It's certainly not a straight line, but I do believe that our current unified command structure is a lot better than what we had before. Doesn't mean the polticians and big brass won't still make mistakes though.

Off topic, I find it interesting that when you look at Son Tay it was lack of up to date intelligence that spoiled what was otherwise a brilliantly conceived and executed operation. I only learned recently that the Eagle Claw leaders had access to intelligence that would have made the operation a "piece of cake" according to one of the honchos, but it was logistical failures that ruined that effort. As my boss Colonel Carney titled his own book "No Room for Error"....