One thing easy to lose is perspective. Guys like the Major are those great leaders who always keep their men in the right frame of mind. We are Marines today, but we owe all that is revered in our name to those who came before us. We inherited their legacy and it is on us to keep it going and never let them down. 1st Force CO recounts an amazing story about the grit and determination of fighting Marines. Read on: 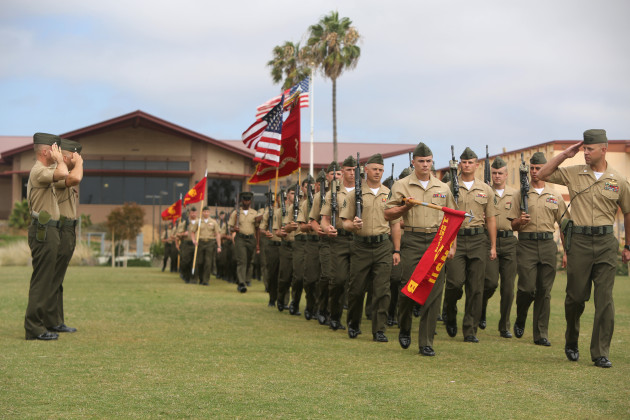 
Good afternoon distinguished guests, ladies and gentlemen. It is a great honor and privilege to stand before you today and address the newest generation of Reconnaissance Marines. You and your families should be extremely proud of what you have accomplished here. Marines are as tough as they come, but not many Marines can do what you have done and graduate from the most difficult course in our beloved Corps.

There is a reason that BRC is so difficult. Being a Recon Marine is the toughest job in the Marine Corps. You are now part of an amazing fraternity whose ranks are populated with the finest warriors to ever don the eagle, globe, and anchor. Men like Evans Carlson, Jimmie Howard, and Brian Blonder. There are men in this room right now whose names will also adorn the walls of BRC and be an inspiration for future generations of reconnaissance men and Marines everywhere.

I have had the extreme fortune of working with such incredible men. I came through this course back in 2007 and through luck and sheer stubbornness, somehow managed to graduate. Like all of you, I was overjoyed with my accomplishment and eager to see what the future in this community held for me. That moment came sooner than I realized.

I was lying in bed and was woken up by a phone call around two or three in the morning. Seven Marines from 2/7 had died in one day of fighting in the Helmand and Farah provinces of Afghanistan, and the MEF CG wanted to deploy my platoon as soon as possible. Four days later, my Marines and I were in Afghanistan. We had only been in Afghanistan a few days when something terrible happened. A platoon from Golf 2/7 had been ambushed in the city of Shewan, and over the course of four or five hours, suffered significant casualties before they were able to finally beat back the Taliban and fight their way back to their forward operating base.

On August 8th, 2008, 2nd Platoon, 1st Force, call sign Jaeger, conducted a deliberate raid on the city of Shewan. We had only been in the city for 20 or 30 minutes before we were assaulted with volleys of RPG and machine gun fire. My platoon sergeant took aim, held his breath, and stopped one of the RPG gunners dead with a shot to the head. From a hundred yards. From the standing position. The most incredible thing I’ve ever seen in my life is my son being born. A close second is seeing my platoon sergeant stand fearlessly against an onslaught of lead and fire and show the enemies of our nation that the strongest walls are made of men, and not brick or concrete.

This courageous act kicked off some of the most vicious fighting I have experienced in over a decade of war in Iraq and Afghanistan. Thirty Force Reconnaissance Marines bravely fought back countless waves of Taliban fighters for over eight hours of vicious combat, suffering hour after hour of intense heat, withering enemy fire, and countless volleys of RPG, mortar, and rocket fire. Intelligence reporting later indicated that the enemy force numbered between 150-500 fighters.

One by one, crew-served weapons ran dry. The battle raged on until the last remaining magazines were redistributed, and we were left with no choice but to conduct a savage counterattack against the numerically superior and entrenched Taliban force. These brave Reconnaissance Marines fought past the point of of exhaustion to continue their relentless assault until the Taliban were driven from the battlefield, littering the city with spent brass, scarring its buildings, and piling up the broken bodies of the enemy. No Americans were killed in the fighting. Villagers later complained that it took them several days to remove and bury all the enemy dead.

At one point in the fighting, my corpsman told me that one of our Marines was at death’s door with heatstroke. Outnumbered beyond belief, I had to make one of the hardest decisions I’ve ever made in my career. I told one of my men that I needed him to participate in the counterattack even though it would probably kill him. He only asked me one question: “Sir, can I drop my blouse?” Where do we get such men? I know the answer. Right here. In this auditorium.

Never forget that you are part of the most elite and legendary war-fighting organization that the Marine Corps has ever seen. Our forefathers earned our proud reputation through great personal courage and sacrifice in fierce combat in WWII, Korea, Vietnam, Somalia, Iraq, and Afghanistan. Never do anything to bring shame or embarrassment to the prestigious legacy of our community. Every day is a selection, and every task is a test. Earn your place here every single day and protect the proud legacy and reputation of the Marine Reconnaissance community. I am proud to call you my brothers, and for those of you who seek greater challenges, 1st Force Reconnaissance Company is always seeking the best and the brightest of our community.

Thank you for your time, and Semper Fidelis.

Outstanding address, from an outstanding Recon Marine!
Last edited: May 6, 2015

Wouldn't it be great to have a man like that as a member of this site?

digrar said:
Wouldn't it be great to have a man like that as a member of this site?
Click to expand...

I've said it once, and it deserves saying it again. Amazing speech.

I'm a Force Reconnaissance Marine, not a MARSOC Marine.

Yut! Hell of a speech.

And the green flap of death is still around?
M

Forgive Yoda, his misspeak... he has had a bad cold for a week.
R

Forgive Yoda, his misspeak... he has had a bad cold for a week.
Click to expand...

Forgive Yoda, his misspeak... he has had a bad cold for a week.
Click to expand...

Ricky Recon is known for that. Saying it is a cold, you are being super kind.

Underneath a buffed and polished Marine, is a 03, waiting to burst out.

I had tears in my eyes when I finished reading this speech, sir. You show us an example of great leadership in a time when good leaders are hard to find. God bless you, sir.