The formation is probably the country's second highest priority in terms of military developement and it's activities remain highly classified as operations are allegedly conducted way beyond the country borders, including Afghanistan, Iraq and possibly also Chechnya. Maybe as classified as the army's research centers, that's why gathering lot of pictures on your own is very very difficult. But there are some, in fact there are allready a lot since the last war in 2008. 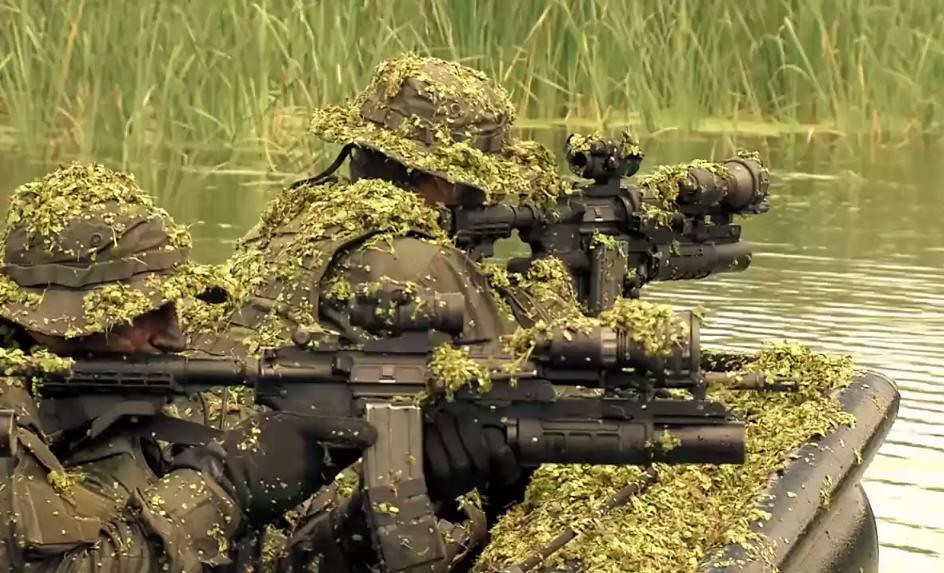 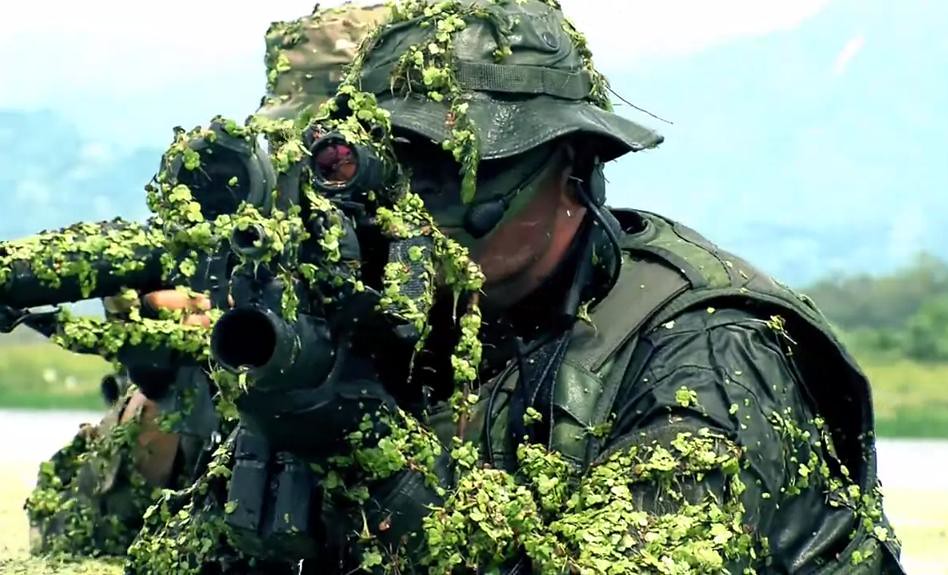 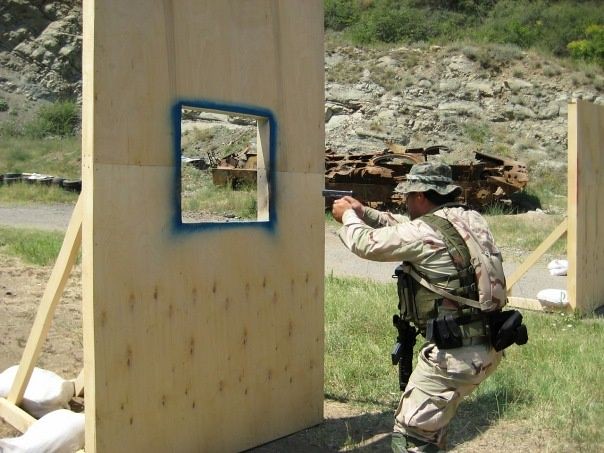 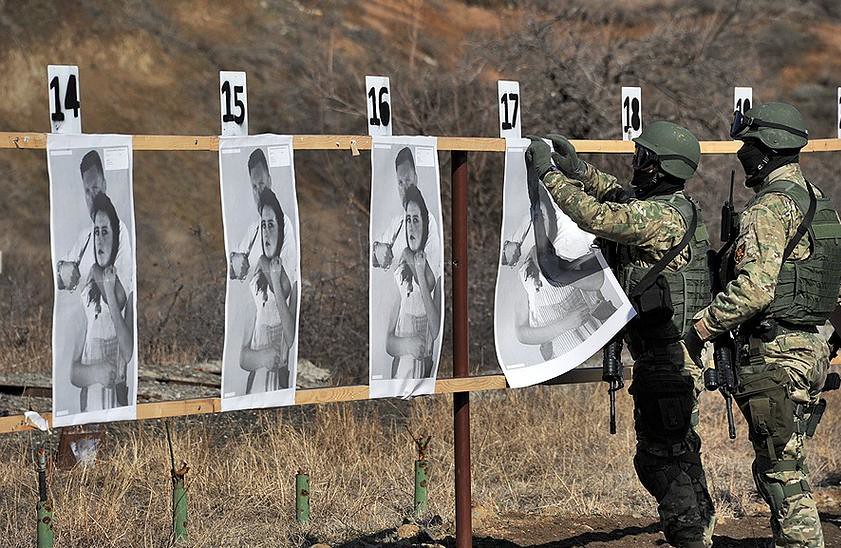 ( Take this little hint: Not everyone looking badass, is special forces. Anyone armed with a G-36, TAR-21, Micro-Galil or MP5 SD is most likely MIA ( Ministry of Internal Affairs. People tend to mix them up most of the time and there is a great rivalry between these guys ). Basicaly everyone wearing black cevlar vests and/or uniforms or ACU cevlar vests and/or uniforms + named weapons, is most likely not military )

Operating "possibly on the Chechen border"? Dude, are you serious?

Curios a's to why you've posted so much about Georgian military? Didn't see an intro so...

lindy said:
Curios a's to why you've posted so much about Georgian military? Didn't see an intro so...
Click to expand...


Some of the older Intro threads were deleted so someone who joined a few years ago may not have one around.

ETA: The Hinds look Photoshopped in. Even if they aren't, they look odd.

lindy said:
Operating "possibly on the Chechen border"? Dude, are you serious?

Curios a's to why you've posted so much about Georgian military? Didn't see an intro so...
Click to expand...


I guess my 3 years old intro was allready deleted. Anyhow, operations on the Russo-Georgian border were nothing unusual. I see you have to familiarize yourself on the Chechen insurgency which spread not only in Russia but also in Georgia and surrounding nations, but particularily in the region of Mestia, Georiga. Thousands of refugees crossed the border during the second Chechen War, many of whom were combatants hiding and entranching themselves in forrests. After beeing stressed by Moskow that Georgia hosts terrorists and probably even arms them, the government had no choice but to clean those areas. Georgians undertook numerous action there including artillery strikes on Chechen positions and special operations. There was fluent traffic on the border prior to these undertakings. How much the US was later involved in such activities, is simply classified.

ETA: The Hinds look Photoshopped in. Even if they aren't, they look odd.
Click to expand...

Don't you mean Kakheti? It's not like the fighters, or illegal bandit formations, could simply drive down the Georgian Military Highway.

lindy said:
Don't you mean Kakheti? It's not like the fighters, or illegal bandit formations, could simply drive down the Georgian Military Highway.


Do you know ? You overestimate the border security in Russia and Georgia at that time. I guess you mean the Pankisi Gorge. No, basically the borders were not even protected, that's a fact especialy for the entire north-eastern part of the country + they could freely enter free from Abkhazia and South Ossetia. The Georgian government did not refuse Chechen refugees who fled the war, to encamp into Georgia. However that turned to be a great mistake as the Chechen insurgents crowded with civilians and later had several enclaves. The government than enforced tight security around these areas and demanded the insurgents to leave the country, quickly enough opened fire on them as Putin repeatedly stressed hard. The only force used there were special forces and operations were undertaken along the border. There however where never details, but claims that Russians were involved directly and besides Georgians, also the US later on. But don't track that issue further, as it makes absolutly no sence for anyone.

If the borders of Northern Caucasus ( Russia ) would have been somewhat properly guarded, the Chechens wouldn't have been in Dagestan, Abkhazia, Moskow etc. They moved around as they wanted in 1990-2003.

Couldn't find these without MOD watermark

I see they have been hit by the Multicam fetish too! :-"

Yes, his english is better than some people here!

I see they have been hit by the Multicam fetish too! :-"

Yes, his english is better than some people here!
Click to expand...


The Multicam fits pretty good on our territory. I think the MOD made a well calculated decision. It should remain the uniform until someone developes something that adapts any environment you enter. Kinda like chameleon style .... ^^

What did these guys do during the 2008 war with Russia?

dknob said:
What did these guys do during the 2008 war with Russia?
Click to expand...


Here's how the situation was as far as I know from military sources.

Most of the brigade was stationed in Tbilisi center and entrance facing the city of Gori.

Some smaller detachments were engaged in early hours of the conflict, mostly paving the way at midnight for Interior Ministry forces and ground troops. This was on August 7-8
On the next day, the same detachments then took control of some villages and the northern entrance of the South Ossetian capital, Tskhinvali, facing direction from where the Russians would most likely appraoch.

Russians at that time report to have Georgian "saboteurs" prevented of blowing up the Roki tunnel, which links SO with Russia. No confirmed kills however. Georgia claims, the tunnel has been blown up. That of course was not true. Later the Georgian gov would even denie that such operation was undertaken since the entrance was heavily guarded. The tunnel was struck by bombing runs however, but failed to collapse.

The Georgian 3rd and 4th Infantry Brigade took surrounding heights and flanked the city from it's west and east, but maintained positions while the mobile MIA rushed into the center. Receiving fire from the barracks, the MIA requested military troops to silence the enemy. Infantry elements of the 3rd Brigade approaching from the west, tried to take the Russian garrison and some fortified buildings around them, but failed. Only the southern barracks were taken.

On August 9 the entranched commando unit had visual on the rapidly advancing lead mechanized batallion of the Russian 58zh Army. The commanding officer was noone less but General Khrulyov. The convoy was either ambushed before or after entering the city. However, some significant damage must have been dealt as the Georgians were the ones who maintained ground in the end. The Russian commander got wounded in the course of fighting. Only a handful of vehicles made it out togheter with Khrulyov. Expecting more Russian units to enter the scene, the commandos withdrew from the area. This can also be due to lack of ammunition as I read somewhere that every single RPG tube and grenade was used in that one attack.

Before having a chance to carry out further assaults on the barracks, more Russian reinforcements arrived. The MIA simply ignored the fighting and tried to control the city as they were cought into sporadic militia resistance partialy armed with anti tank weapons. Russian troops now streaming into Georgia in the thousands, all special forces units in action were advised to withdraw to the capital. Around 2.000 commandos were to hold off an initial Russian attack on Tbilisi. It didn't came that far fortunatly

Documentary Intro. I have never watched it. I was told that a single episode was shown on TV and than never again since.

Some seen during the latest presidential speech. It's rather rare to see them so exposed

^^ Well, they are beeing instructed by "NATO's best special units". So I guess, Navy Seals Slide is included in the package of T3 allround defence

anyway, as long as a unit is qualified for it's task, I don't really care. You haven't seen our anti terror units ....... lol

Reports that a heavily armed ( automatic rifles and rocket propelled grenade launchers ) diversant group of about 20 individuals have crossed the Georgian-Russian border from Dagestan and took 10 local civilians hostage. After two days of negociations the Georgian authorities demanded the terrorists to lay down their arms. When refusing they immidiatly opened fire what resulted into 2 special police officers beeing killed instantly due to explosion and several more wounded. While trying to retreive the allready dead, one medical corps doctor from army special forces received a critical hit and died at the spot. A furious shootout followed in which 11 members of the diversant group got eliminated, while 3 fled the scene and the other 6 remain besieged by the special forces.

the two groups of hostages, each including 5 civilians were rescued during the operation, without any losses.