Not only did it fail to eject, it jammed the shell back up into the chamber making removal incredibly difficult. This happened 3 times in a row, each time requiring me to eventually pry the shell casing out with a screwdriver (yeah, 3x -- I'm a slow learner or something). This video captures the problem perfectly:

I purchased this shotty nearly 2 years ago specifically for 3-gun use. I don't have a lot of bandwidth for matches these days, so spending a lot of money on specific use shotgun wasn't really appealing. An opportunity to purchase this came up at a price that, on the surface, made it way too good to pass up. It has a lot of great features and when it works, it's really pretty terrific - huge bang for my buck (literally). The catch is...when it works.

Last fall was the first time I had an opportunity to shoot it while sporting clays; it sat in the case unused for over a year. I put about a hundred shells through it that day. It worked flawlessly and, at less than a quarter of the price of something like a Versa Max, I felt like I'd totally scored picking this thing up. Yesterday was only the second outing with it. I'd only put about 6 - 8 shells through it before it started to act up. Just a couple shells later it was virtually unusable. Another shooter there had the same gun and his ran flawlessly. I thought maybe it was an ammo issue; I had to buy some low cost budget brand of shells because it was all I could find locally on short notice. But that wasn't it -- at least not entirely.

Full disclosure: I bear some responsibility here as well. Lack of proper care may've contributed to the issue as well by not giving it a good cleaning after it's first use. So, I'll own that. Nonetheless, I wouldn't expect this significant a problem from that alone or even this combined with poor ammo.

In fact, as noted in the video above, the primary problem appears to be with the gas system. OR3GUN appears to have some reasonable solutions but before I run out and buy their products, I need to do a bit more research on the issue to make sure what I do corrects the problem. We'll see what I find. I'm optimistic with a few upgrades, this can be a very reliable runner.

Might be worth emailing Mosberg. They might have a fix they can send out or maybe some instructions for an armourer to fix it.

After doing some more research and pulling the gun apart, I decided to purchase a kit from OR3GUN: 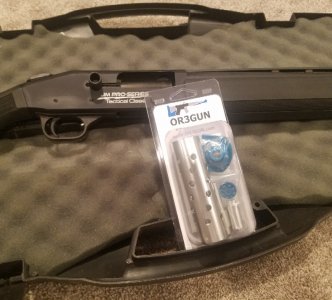 As mentioned in the OP, the issue apparently is with the gas system and it's inability to effectively vent after firing. When I disassembled it, the gas piston had a ton of build up on it to the point it wasn't functioning correctly and caused the stoppage. I cleaned it up good and replaced several parts with the OR3GUN parts.

The OR3GUN parts kit included:
* drilled spacer tube, which should assist as shown in the video above
* replacement follower with a larger vent hole
* adjustable plunger and retainer that will allow for improved cycling of lighter loads, like the ones I mostly use in 3 gun and sporting clays
* forearm retainer which doesn't improve venting but simply minimizes receiver gap and improved fit of forearm.
* larger bolt release button with the idea that it makes it quicker/easier to find, however, after installing and testing I removed it because I didn't like the way it fit; it required more pressure to activate the release.

There is one more part I'd like to purchase but it's not in stock and that is the competition piston from SBE Precision. Their design allows the carbon and fouling to vent better. It's a $55 part but when combined with the OR3GUN upgrades, promises to make this a very, very reliable runner.

I haven't fired it since making the changes but will do so within the next couple weeks. I expect it go something like this 😉:

Seeing as this thread was started by a Ranger, I'll post this here.

I'm not an airport guy, some reason this popped up on you tube. Ranger Regiment guys participate in airsoft.

There’s a reason shooters call it the “Jam Pro”!

A shame considering it was designed with and carries the "name" of Jerry Miculek.