Due to a mutual friend, I was introduced to Carlos Hathcock and he ended up inviting me over to his house to chat one Saturday back in about 1993.

Due to OPSEC, I won't tell everything he shared with me here. However, there are some interesting things I can.

First, I have to tell this part, because I think it turned out to be kinda special. I had him sign a poster print of him I had bought years prior at a gun show and had left in the protective shipping tube, not sure what I was ever going to do with it. Once I was invited over to Gunny's house to meet him, I knew just what the destiny of that print could be. At DEVGRU, there's a tradition of leaving a gift with your team when you depart. I knew that my sniper crew there would think a personally signed, matted and framed print of old "White Feather" would be pretty cool.

So, sitting there with him in his living room in Va Beach, Gunny called for his wife to bring his special silver paint pen and signed the print to the members of the team. I had the print professionally matted, glassed and framed, then kept it in storage for the proper occasion. When I departed that unit, I presented my team with the print of Gunny, which would have been good enough, but Gunny had sadly passed away since I had him sign the print, so it was even more unique and special for the guys. I found myself being particularly glad I had thought to have him sign it while I had the opportunity. Some things in this life you just can't buy.

Another thing was that I learned Gunny had really enjoyed what he did as a Sniper. When I had originally read his book, I had gotten the impression he reluctantly carried out his duties only because he knew it had to be done and he didn't want some lesser prepared Marine to have to do it...

In person, I got a completely different feel. He seemed like he really got into it, in a much darker way. He had a kind of gleam in his eye as he talked about his accomplishments. He wasn't just some dumb country boy, he was a hunter of man and plenty good at it... I liked that!

I asked him about the Ghilly Suit and why he hadn't used something more like that. He explained that they didn't know about that back then, but said he would have definitely made use of one if he had.

He went into how he stalked the general and that he actually low crawled on his side, picking the grass back up behind him as he went with his toes. He said that's why he went so slow. He didn't want a patrol running him down via his snail trail. You snipers out there know what I'm talking about. I found that very interesting.

He also told me he picked up his brass, every time, even when they had gotten ambushed once on a patrol in. I remember thinking there's no way I'd be worried about my brass during a chance contact like that, but Gunny was proud of his discipline, so I wasn't going to knock it. Besides, maybe he was right to have done that. After all, he lived that war, not me.

More recently, I able to meet Chuck Mawhinney at the SHOT show in Vegas. I was honored. I was introduced to him by mutual friends and was able to chat with him a couple times for quite a while. He told me all about the book that was written about him, only to be lost for all time when the wife of the author threw out the entire project when her husband suddenly passed away. Apparently, the entire project had been completed, with only the submission to the publisher to go.

With me encouraging him to get his story out there for so many snipers who would love to learn about his accomplishments, he let me know it will just never happen. The reason is that when he and the author asked so many of his old unit members and buddies for their input, it wasn't always a good reflection back for all of them, so Chuck just can't go back and ask them to go through it all again. Crying shame.

When I asked him about his tactics and techniques, he humbly claimed NONE of what he did would be relevant today. I seriously doubt that to be true. Some things are universal. Chuck may not be nearly as much of a dinosaur as he humbly claims.

So, what most snipers will have to know about Chuck is simply that he was another great Warrior who kicked some serious ass with his long gun. Deep thanks to him for it!

Both Hatchcock and Mawhinney were truly great Patriots and Warriors. I am truly honored to have been able to meet them both.

I read his book when I was a private. That was a great book. That book is what inspired me to go SF.

JJOIFVET said:
I read his book when I was a private. That was a great book. That book is what inspired me to go SF.
Click to expand...

Agreed. I read it several times in short order. I had him sign that, too. He made a big deal about how it was one of the original hard covers and he and his wife commented that they hadn't seen one of those for quite some time. Good peeps, for sure.

I have never had the pleasure of meeting him, but he was a great Marine and Human.

Nice post, SAWMAN - GySgt. Hathcock was a guest speaker and instructor at the DM school that I worked at on Dam Neck. Perhaps you and I were on that end of the base at the same time.

I, too, was very lucky to know Gunny, and I was even luckier to pick him up at his house in VA Beach and drive him to the base in the govi van on more then a few occasions. Back around 1995-1997 he would show up on the range at Dam Neck when we had a school going on. And when his health allowed. Other times we would go pick him up at his house -- that was always fun trying to decide who would go.

He taught me a lot, I was like a sponge around him. You'd be a fool not to be. I'll never forget his stories, and the discussions we had about him being able to "get in a bubble and focus on getting the job done". He was an amazing shot, like I need to say that, but I saw him stand on the 500 yard line and nail bulls with iron sights in the standing position. Easy.

I remember the first time he came there just like it was yesterday. After the fire I had years ago I only have one picture left of Gunny and I, and it's from that first day. Eventually I got somewhat friendly with him to the point where he signed an AR-15 that I have. It wasn't easy to get him to sign that as he wasn't a big fan of the early M-16's.

I have a lot of good memories about him, but sadly, I also remember being on the rifle range during the weekends competing in the NRA high power rifle matches and seeing the trash bags go around with people stuffing money in them to help with Gunny's medical bills. I was also at Storm Mountain in West Virginia for a competition to benefit him where the bags were passed around. He really got screwed by the Corps. But he was a proud Marine until the end.

Got my shooting team smokey on.....

A picture, of a damaged picture of Carlos Hathcock and I - Dam Neck Rifle Range 1995 (looks like I'm blinking) 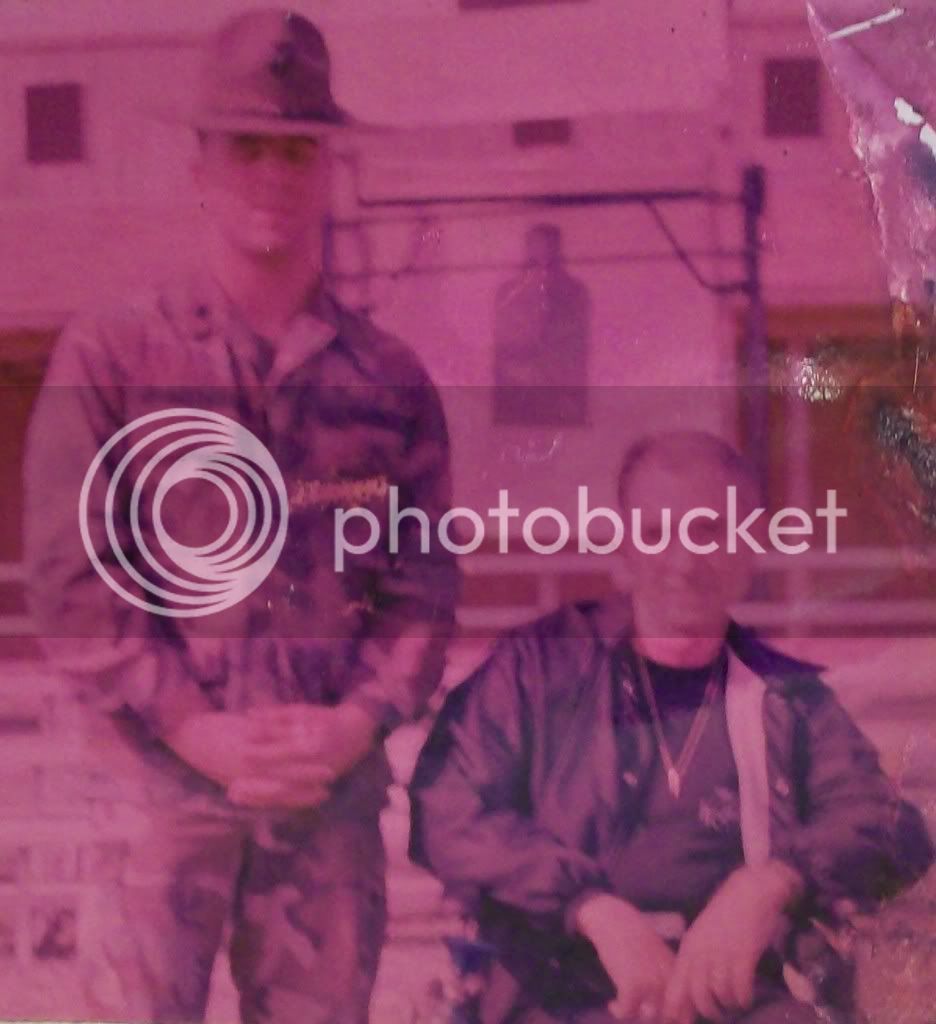 Nice picture, no matter the damage.

Burned many thousands of rounds on that range...
7

RIP, Long Trang. The Gunny was a legend in RVN. He made one of his most famous shots--nailing the VC sniper through the scope--from near Hill 55--Bobo mountain, my counterparts called it--and I've stalked some of the same trails. I think the Gunny was back at Quantico when I got to that AO.

I envy you meeting him.

TheWookie said:
A picture, of a damaged picture of Carlos Hathcock and I - Dam Neck Rifle Range 1995 (looks like I'm blinking)

Ya know, with that smokey on, you reminded me of the man who made me want to be a sniper in the first place. It was in Marine Corps boot camp 1982, out at the rifle range on Camp Pendleton. Looked just like the scene from Full Metal Jacket with us in the bleachers and up walks a Marine Sniper with an impressive introduction from the Drill Instructors. I still remember his name: Staff Sergeant Greathouse. Funny how some things stay with a young man.

Now that I'm old, I can't remember what I had for lunch, but I remember that man's name. Funny.

I wanna be a drill instructor, I wanna wear that smokey bear....

Yeah, we wore the smokey on Dam Neck - The campaign cover has a long history with the USMC shooting teams, but it's most recognized for the hat the DI wears.

I never had the chance to meet Hathcock and wish I could have, met Mawhinney at the last few SHOT shows.

Another in a long line of great Marines. In 30 or 40 more years, he'll go down like Chesty Puller, Smedly Butler and Dan Daly, no doubt.

JBS said:
Another in a long line of great Marines. In 30 or 40 more years, he'll go down like Chesty Puller, Smedly Butler and Dan Daly, no doubt
Click to expand...

Ajax said:
Like Smedley w/o the tertiary pacifism. So sad.

Some would argue that his views reflected the days he was living in.

Congress' investigation into Butler's allegations yielded a confirmation that he was right.

Not being a Marine, I'm not going down that booby-trapped road. :cool: