This is for all the squids in here...

I am in awe at the beauty of this ship, I wish it would visit the Philippines sometimes. :)

USS Independence (LCS-2), the class prototype for the Independence-class littoral combat ship, will be the sixth ship of the United States Navy to be named for the concept of independence. It is the design produced by the General Dynamics consortium for the Navy's littoral combat ship program, and competes with the Lockheed Martin-designed USS Freedom.
It is intended as a small assault transport that can take on various capabilities with the installation of mission modules. The ship is a trimaran design that can make more than 40 knots (74 km/h; 46 mph), and was delivered to the Navy at the end of 2009. (from Wiki) 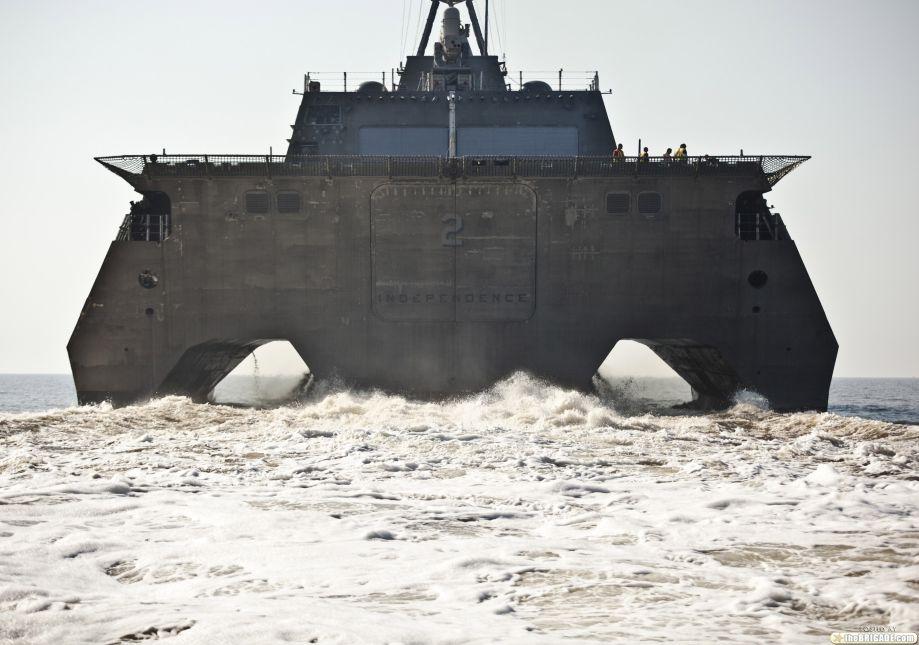 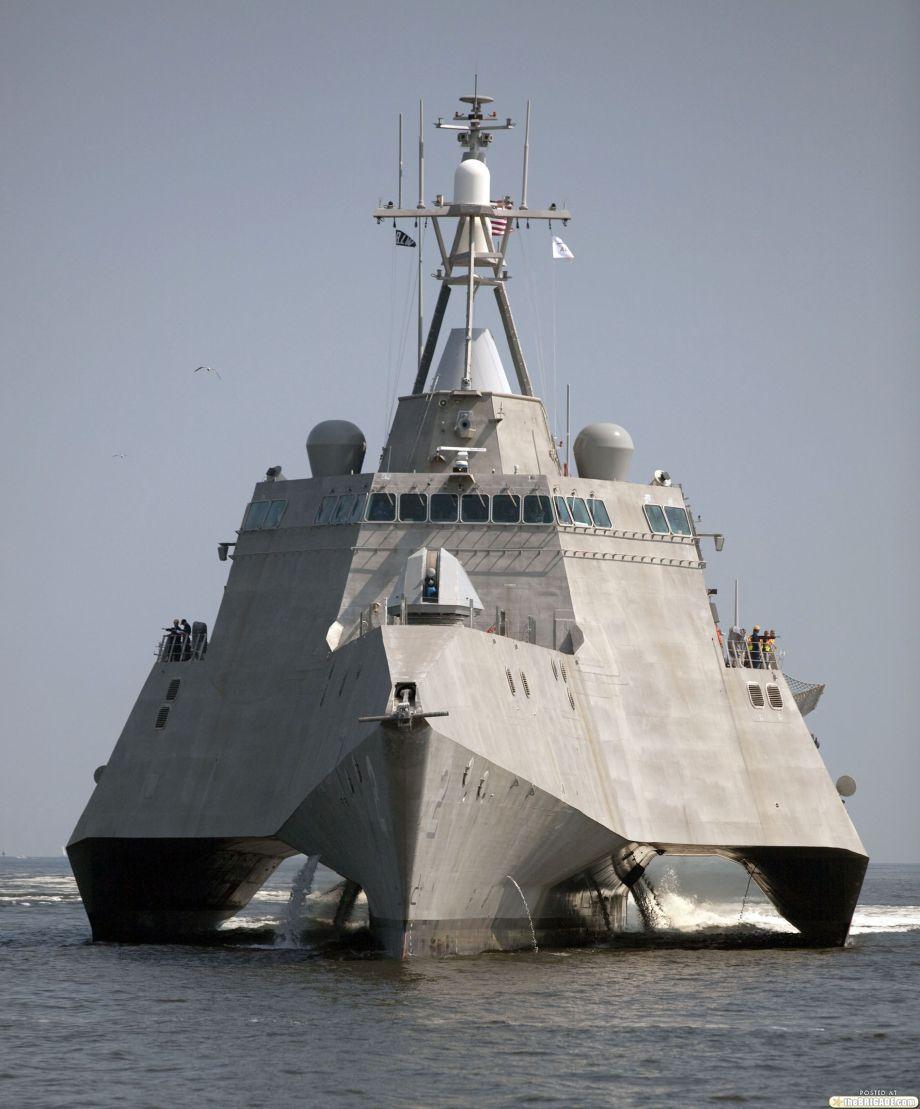 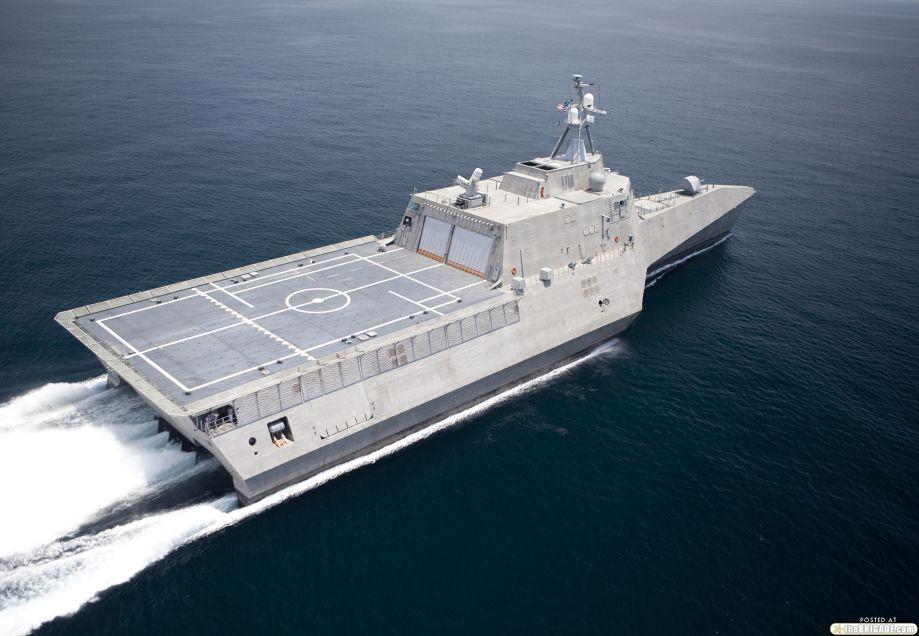 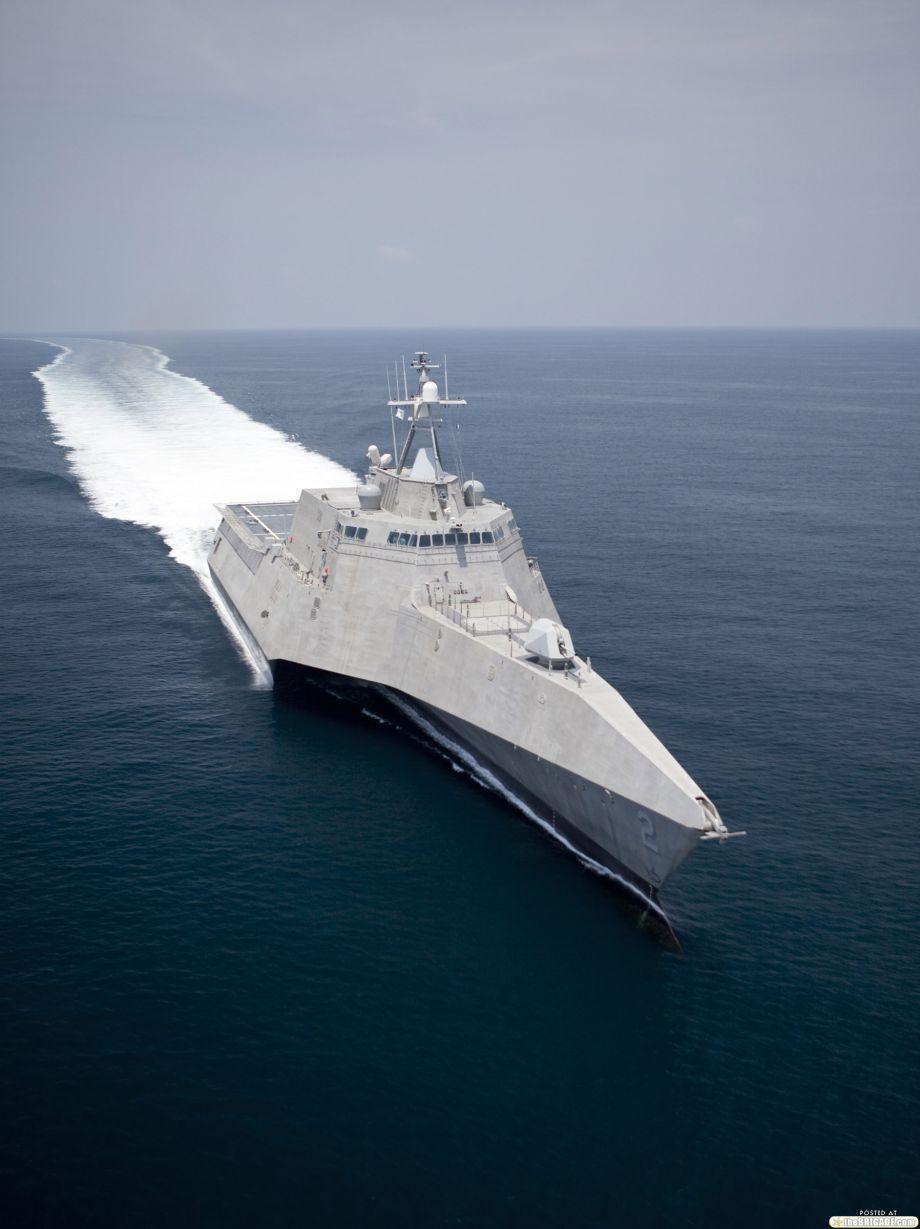 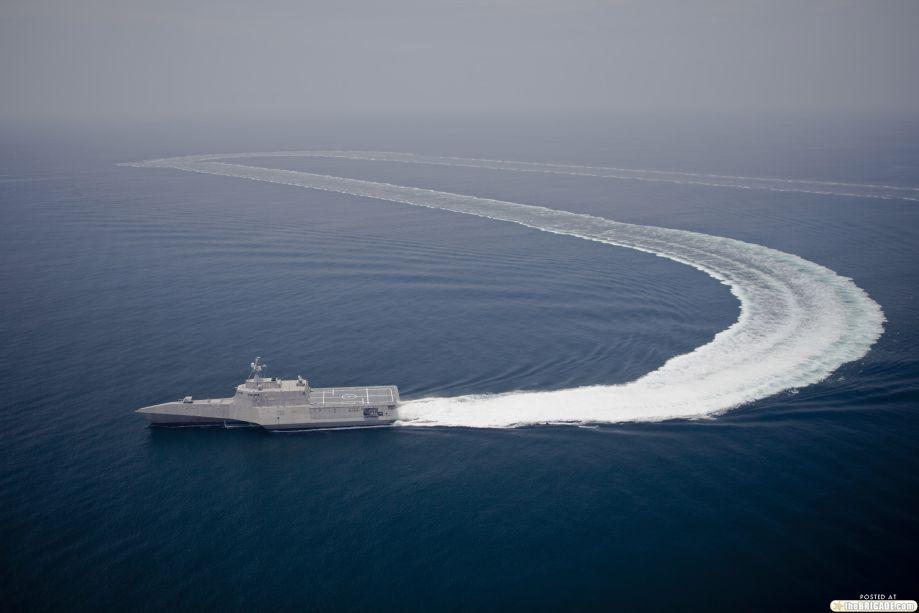 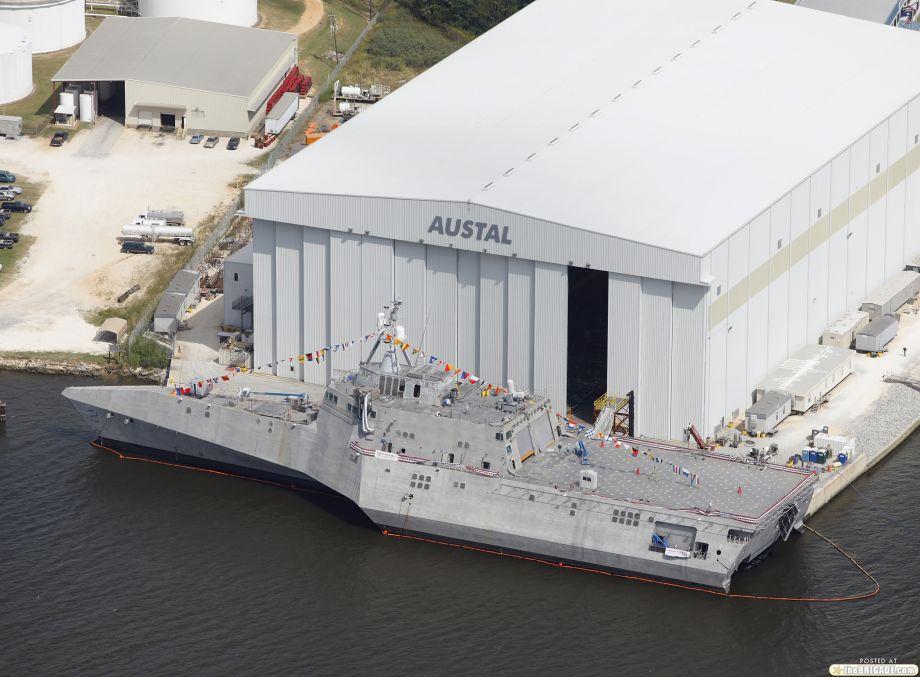 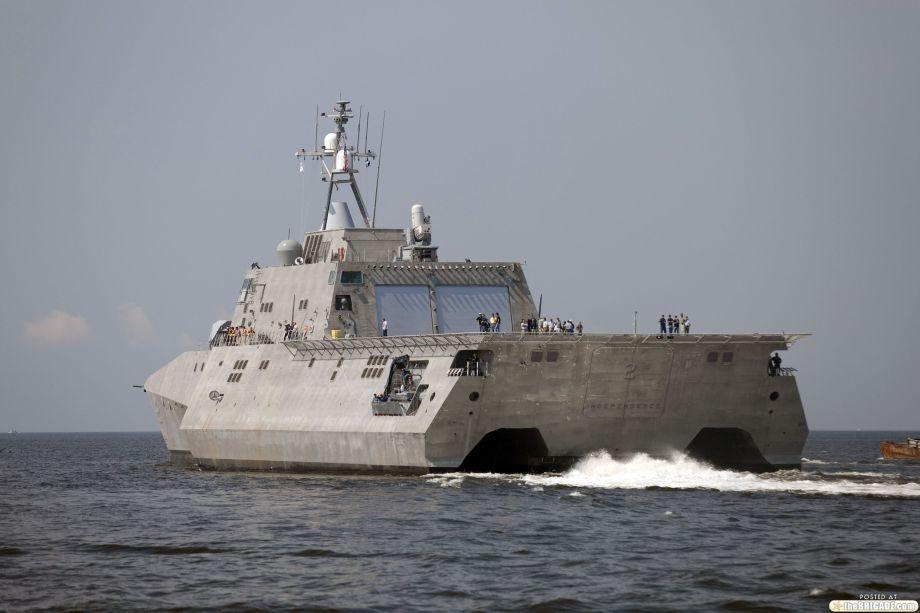 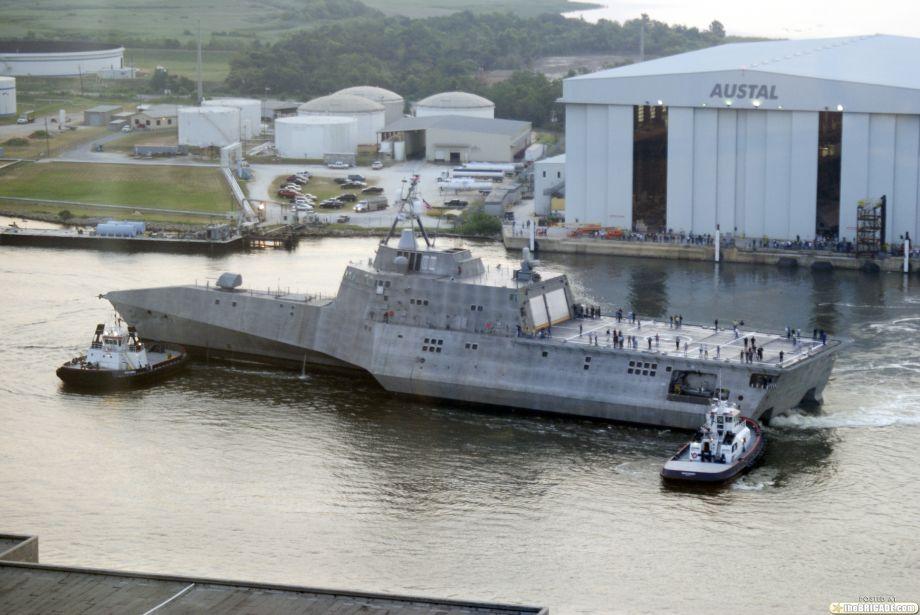 I highly suspect a rail gun is mounted on a secret compartment somewhere near that anchor.

Anyone else not seeing images?

Boon said:
Anyone else not seeing images?
Click to expand...

Open your eyes
B

Boon said:
Anyone else not seeing images?
Click to expand...

Refresh your browser. It'll pop out.

An article about the propulsion systems used on these babies.

The Navy is testing new concepts in power generation, conversion, and distribution to make ships more efficient, economic, and combat-effective. Ships being developed in both the near term and long term will have a variety of newly designed propulsion systems depending on their size, mission, and ship characteristics. This article discusses some key technologies on the horizon.

An integrated power system (IPS) is an all-electric architecture, providing electric power to the total ship with an integrated plant. IPS enables a ship’s electrical loads, such as pumps and lighting, to be powered from the same electrical source as the propulsion system (e.g., electric drive), eliminating the need for separate power generation capabilities for these loads. To meet the increased power demands for new sea-based weapon systems, next-generation surface combatants, such as the DDG 1000 Zumwalt-class of guided missile destroyers (see Figure 1), will feature all-electric propulsion and an entirely new way of distributing power for propulsion, ship service, and combat capability.

All-Electric Propulsion is a promising technology for both naval and commercial marine applications. On the DDG 1000, power will be generated by two large gas turbine generators and two smaller ones. By using efficient power management, power is available to handle all of the electric loads throughout the ship, including potential future power-hungry weapons such as rail guns or directed energy weapons. The combat value of an electric ship goes well beyond weapon capability and capacity. There are significant efficiencies and redundancies. At full power, DDG 1000 will achieve speeds up to 30 knots. If one of the main turbines is lost, the plant can be isolated and still achieve 27 knots.

Since a warship usually cruises at reduced power once it has arrived on station, normal station-keeping can be accommodated with the two small turbines to save fuel and reduce radiated noise. The power previously trapped in the propulsion train can now be directed to enhance combat capability and mission flexibility. At lower speeds, Zumwalt has a surplus of power that can be made available as needed. Further advantages include the elimination of maintenance-intensive and high temperature auxiliary steam systems, reduced noise and vibration, and better fuel efficiency.

Among the major advantages of electric drive for naval ships is that the prime movers, whether gas turbines or diesels, do not need to be located in a central machinery space or mechanically connected to the propeller shaft as with traditional propulsion systems. Instead, the engines can be located anywhere in the ship, distributed throughout the hull, and connected to generators to supply power. This power can be fed to a central bus that can be used for propulsion.

An all-electric integrated propulsion system enables more design flexibility in terms of engine placement. For example, the engines can be placed in the bow, stern, or even in the superstructure for smaller engines. One of the advantages of distributed power in a warship is survivability. If an engine incurs damage or is incapacitated in one part of the ship, that part of the distribution system can be isolated while power can still be generated and distributed throughout the rest of the system. The DDG 1000 will be powered by Rolls-Royce MT30 gas turbines, which is based upon the Rolls-Royce “Trent” engine that powers the Boeing 777 airliner. The aviation version of the engine has a demonstrated reliability of 99.98%. The ‘marinized’ version of the MT30 has 80% commonality with the Trent 800 but is shock-mounted and has different blade coatings for operation in a saltwater environment. This engine is also serving today aboard the new Littoral Combat Ship USS Freedom (LCS 1). Zumwalt will also have a smaller gas turbine, the Rolls-Royce 4500.

DDG 1000 power generators produce 4,160 volts alternating current (AC), which is rectified to direct current (DC) that allows ship service power distribution to be tailored to the ship’s needs. There are three primary advantages to DC. First, DC uses solid state power conversion that supplies loads which are converted back to AC and is a cleaner way to supply power. Secondly, many of the combat systems’ loads are DC. Finally, it enables power to be shared and auctioned. DC enables uninterrupted power even in the occurrence of a casualty.

Controllable pitch propellers and their associated complex hydraulics are not required since the motor, and thus the shaft, can be electrically reversed. But novel approaches to propulsion are being considered for future combatants. Other new naval ships are also adopting integrated electric power systems. The next-generation CVN 21 aircraft carrier, the USS Gerald Ford (see Figure 2), will have a newly designed nuclear power plant and all-electric systems and propulsion.

The next amphibious assault ship, the USS Makin Island (LHA 6), will feature a combined gas turbine and electric propulsion system. The surface combatant IPS propulsion engineering development model (EDM) for DDG 1000 is being tested at the Land-Based Test Site (LBTS) at the Ships Systems Engineering Station in Philadelphia. The test site has been used to evaluate different configurations and motors. The test program validates key system metrics such as torque, speed and power output, and specific fuel consumption for the various configurations.

The Navy has tested the 18-megawatt (MW) advanced induction motor (AIM), which will be the baseline for DDG 1000, produced by Alstom at the LBTS. This is essentially the same system installed on the Royal Navy’s new Type 45 destroyer, the HMS Daring, which has just been commissioned. The IPS features Integrated Fight through Power (IFTP), a fully automated DC Zonal Electric Distribution System (DC ZEDS) that provides flexible, reliable, high quality power to all shipboard loads. Other configurations are also being tested. The IPS system is fully automated with little operator intrusion. The testing at the LBTS will validate that the DDG 1000 IPS will automatically take appropriate corrective action if there is a malfunction or casualty without the input of an operator.

Engineers at the LBTS have also tested a 36-megawatt permanent magnet motor (PMM). PMM has greater power density than the AIM and may be used in future ships.

Many studies were performed on different combinations of gas turbines. The purpose was to avoid development of new gas turbines that were not qualified and in service or on their way into service. Although there are advantages to distributing the power system throughout a warship hull, the size and weight of the various components has usually necessitated keeping the propulsion equipment low in the ship for stability reasons. The DDG 1000 engineering plant layout is relatively conventional because of the air intake, exhaust, and drive arrangement.

DRS Technologies and General Atomics Electromagnetic Systems are developing a hybrid electric drive which permits a smaller service gas turbine to power a permanent magnet motor that can power the ship at slow or “loiter” speeds. Using a smaller turbine can result in significant fuel savings. Furthermore, the motor can be reversed to function as a generator when propulsion gas turbines are online.

Overall, integrated electric drive offers ship designers and operators a plant flexibility that does not exist with mechanical drive systems. However, trade studies must be used to select the appropriate power and propulsion system for each ship. There are some ships with partial electric drive or hybrid electric drive mechanical drive systems. These include the operational Type 23 frigates; the European Multi-Mission Frigates (FREMM), a joint program between France and Italy, which are now in construction for France, Italy, Morocco and Greece; and the amphibious assault ship USS Makin Island (LHD 8), now undergoing trials.

Despite the advantages, there are not a lot of electric drive warships in service. The new generation of electric ships has yet to prove themselves. The DDG 1000, Royal Navy Type 45, and T-AKE propositioning ships are examples of all-electric warships, but they are still in the design phase, under construction, or just entering service. Even though there is significant interest in electric drive systems, there are only a relatively small number of ships actually under construction and in operation.

American Superconductor and Northrop Grumman have recently tested a 36.5-megawatt high-temperature superconductor (HTS) ship propulsion motor at the LBTS. The motor uses HTS wire that can carry 150 times more power than copper wire used in more conventional motors. The advantage is more compact propulsion systems which have greater power density. Superconducting wire can carry more current and generate higher magnetic fields in very small areas and thus can result in a significantly smaller motor. In other words, more power is available from smaller, lighter motors. That means Navy ships can carry more fuel and munitions and have more room for crew’s quarters and weapon systems.
Click to expand...

TheSiatonist said:
This is for all the squids in here...

I am in awe at the beauty of this ship, I wish it would visit the Philippines sometimes. :)

USS Independence (LCS-2), the class prototype for the Independence-class littoral combat ship, will be the sixth ship of the United States Navy


highly suspect a rail gun is mounted on a secret compartment somewhere near that anchor.
Click to expand... Must be a stealth ship, I don't see anything in the first couple posts.


Marauder06 said:
Must be a stealth ship, I don't see anything in the first couple posts.
Click to expand...

Indeed. Perhaps Capt. Spock may have something to do with it.

End of the Littoral Combat Ship?