A 105mm L118 Light Gun is being used by British Gunners to such devastating effect against the Taliban that they have dubbed it the "Dragon". 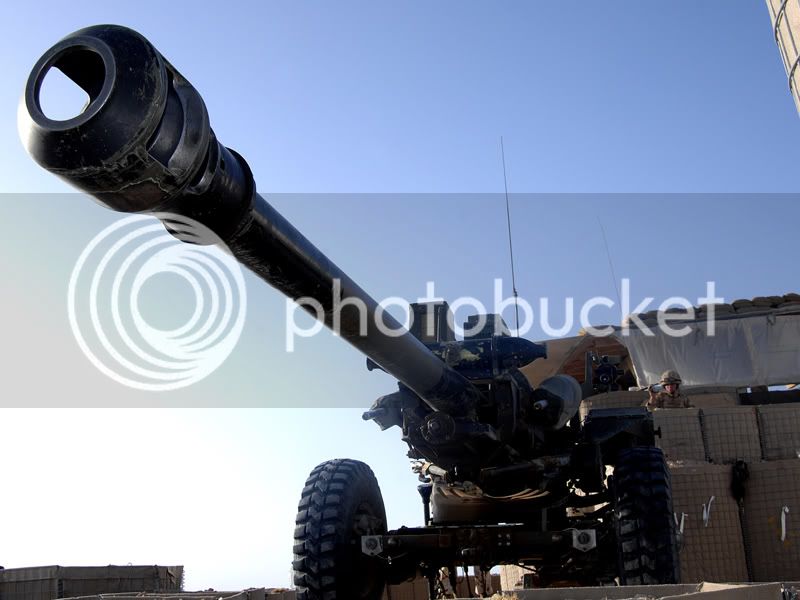 
The gun fired its first round in anger from a rocky outcrop above Musa Qaleh in January 2009 and has been busy ever since protecting coalition and Afghan forces and maintaining security in the area, thereby making it safer for civilians living in the town.

Musa Qaleh sits in a strategic location in north-western Helmand Province. It was re-taken from the Taliban by British, US and Afghan Forces in a major operation in December 2007.

Towering above the town around 2km to the north is the Roshan Tower - a 40m tall, rocky outcrop which provides an excellent vantage point with an eagle's eye view across a massive swath of territory.

Realising the strategic importance of this lofty location, British Gunners hatched a plan to take the fight direct to the enemy. They intended to put a gun weighing over 4,000lbs (1,814kg) at the summit of the rocky cliffs, providing a firing point to provide protection for Musa Qala and Forward Operating Base Edinburgh.

Moving the massive gun to the peak was a logistical challenge. The cliff face was riddled with deep cracks that threatened to crumble under the weight of the gun so a plan was devised to move the gun to the foot of the cliffs by helicopter. 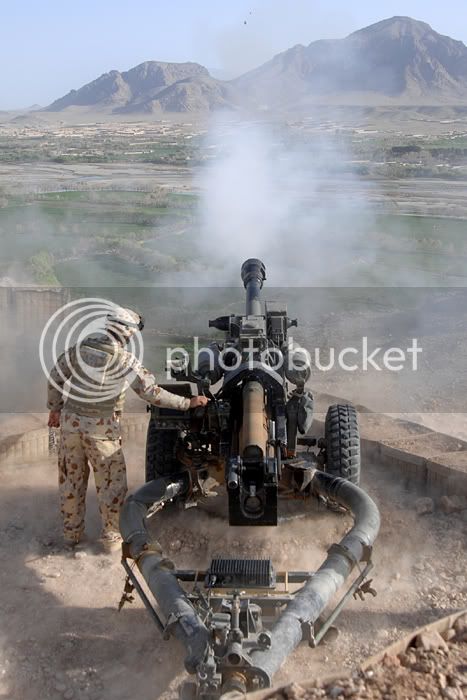 
Four days of large scale changes to the watchtowers to build a solid firing platform ensured the rocky platform could hold the weapon and then the men of Alma Battery, 29 Commando Regiment Royal Artillery, in scenes reminiscent of the Royal Tournament - dismantled the two ton gun and moved it up the cliff face by hand under the cover of darkness.

Major James Vigne, Battery Commander of 8 (Alma) Commando Battery who oversees the Dragon Gun, said:
"The gun itself weighs over 4,000lbs [1,814kg], and the effort involved every available man on the cliff-top outpost. The ammunition boxes, each weighing nearly 100lbs [45kg] and containing High Explosive shells also had to be manhandled up the 400m track.

The move of the gun was done at night to keep the gun secret from the enemy, with Gurkhas providing close protection on the hills and cliffs around - alert to any enemy attempting to ambush the gun-movers.

"Once in place, the gun was camouflaged to prevent the enemy realising the new threat to them. Since it was nicknamed the Dragon, the effort of uncamouflaging it is now called 'bringing the Dragon from its lair'." 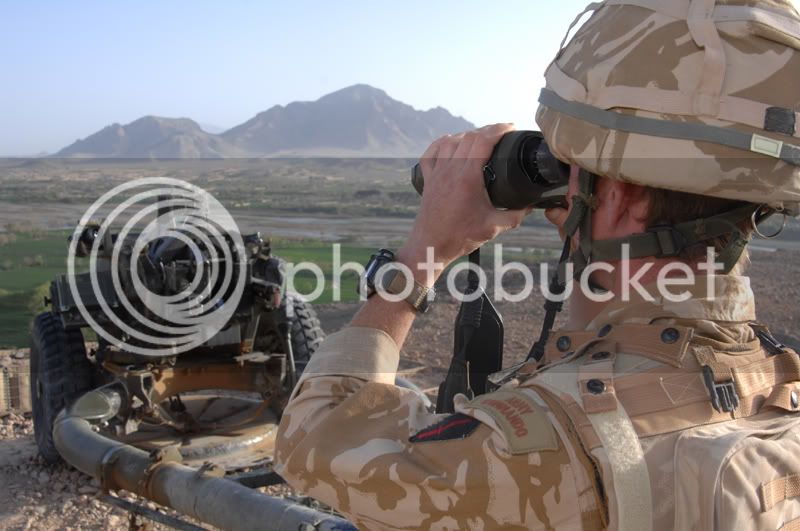 
At the summit, the gun commands a firing point which provides protection for Musa Qala town, the British Forward Operating Base and Patrol Bases deep in the lush Green Zone surrounding it.

Manning the gun are four soldiers from 8 (Alma) Commando Battery - two of whom are Australians from 4th Field Regiment Royal Australian Artillery, attached to 8 Battery for the duration of the tour. In addition, a Fire Support Team of a further four 8 Battery gunners use their excellent observation point to direct air strikes, attack helicopters and Guided Multiple Launch Rocket Systems (GMLRS) accurately and quickly onto targets.

They are joined by soldiers from The 2nd Battalion Royal Gurkha Rifles with a bristling arsenal of weapons - Javelin heat-seeking missiles, sniper rifles and .50cal heavy machine guns.

Gunner Thomas Alder, 8 (Alma) Commando Battery said:
"The Roshan Tower gun platform gives us excellent observation over enemy territory. My role is actually laying the sights onto the enemy directly and firing shells into the heart of the enemy territory. The Taliban are running scared because of the gun - they call it the Dragon because of the huge belching flame that spits out of the barrel when it fires!"
​
Rather than being used in its usual indirect-fire role, firing over obstructions and land masses, being so high up allows it to fire directly down in a straight line onto its targets, affording unrivalled accuracy. 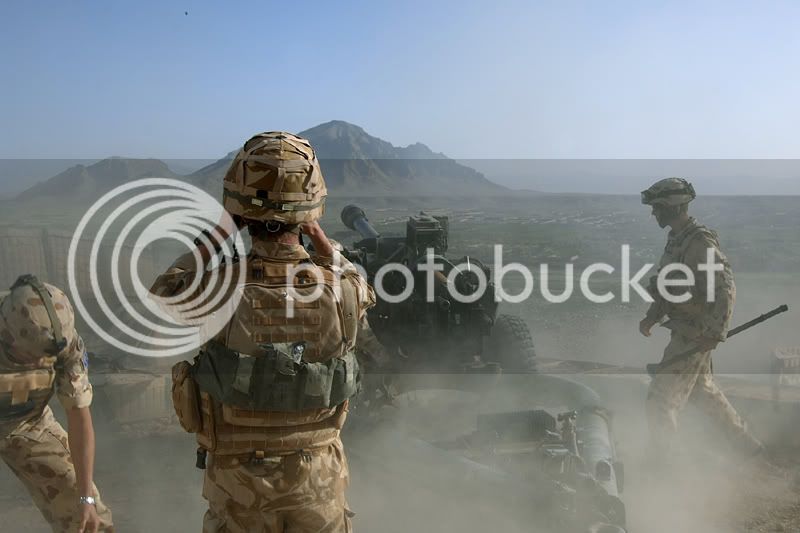 
This role was originally designed for destroying tanks, up to a distance of around 2km away, but the Gunners now manning it are accurately striking targets up to 3km away. They are able to acquire, engage and hit a target at 3km within five seconds.
Major James Vigne, added:
"The gun is phenomenally accurate - achieving first round hits on individuals at up to 3km, allowing us to strike the enemy very precisely and extremely quickly. Our location allows us to provide fire support to our patrols out on the ground and give a running commentary of the locations and movements of the enemy.

"The Dragon is the most feared weapon in our area by the Taliban - they are genuinely frightened by it. It is also the most loved by our own forces - the Gurkhas operating from Musa Qala have been astonished by its speed, pin-point accuracy and power.
"More importantly, its accuracy means we are better able to prevent civilian injuries."
​
Major Ross Daines, Officer Commanding B Company The 2nd Battalion The Royal Gurkha Rifles, said:
"The Dragon is an excellent capability which plays on the enemy's mind and is a huge confidence boost for troops in contact. The enemy cannot now move around the area without fear of being struck - it is responsive, accurate and effective, hitting the enemy hard before they can escape - they cannot run from a 105mm shell."
​ 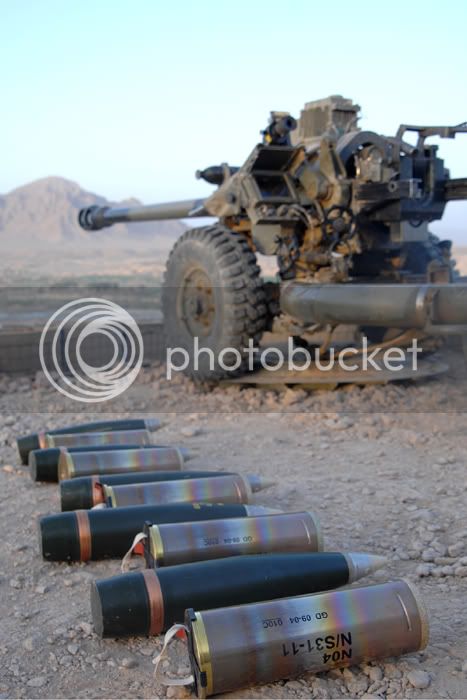 
29 Commando Regiment is an Army Commando gun regiment that has been an integral part of 3 Commando Brigade Royal Marines since 1962. It is equipped with twelve 105mm Light Guns that were first used during the Falklands War in 1982 and have remained in service since. The Regiment also provides the Fire Support Teams that direct the fire of these guns and many other assets such as fast jets, attack helicopters and guided rocket launchers.

The Commando Gunners are manned by Army ranks who wear the coveted Green Beret having completed the All Arms Commando Course at the Commando Training Centre Royal Marines, Lympstone.

For Operation HERRICK 9, the Regiment was augmented by men from 26 Regiment Royal Artillery, based in Germany, as well as by a number of TA and Australian Gunners. The Regiment's fire planning staffs working at HQ level and its Fire Support Teams at company level, have directed the firepower of 3 Commando Brigade - Firepower provided by its own 105mm light artillery, 81mm mortars, Attack Helicopters, multinational fast jets and precision guided rockets fired by 74 (Battleaxe) Battery.

Members of the Regiment have either been delivering this firepower or coordinating it from practically every location that Task Force Helmand troops have operated from.

Good to see Aussies getting some... great article.

I'm kind of confused. Royal Marines and their Army gun companies are British but the article say these guys are Australian. How's that work?

rick said:
I'm kind of confused. Royal Marines and their Army gun companies are British but the article say these guys are Australian. How's that work?
Click to expand...

They're an attachment of Diggers with the Royal Marines..Quite common AFAIK.

That is fucking awesome!

That is very cool!


Irish said:
There are an attachment of Diggers with the Royal Marines..Quite common AFAIK.
Click to expand...

Yep, lots of exchanges happen within the Commonwealth.