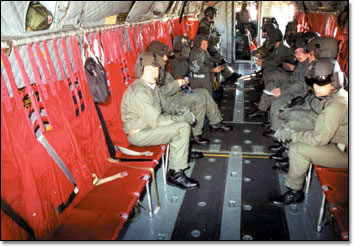 In the first public briefing by one of the U.S. Army's most secret units, Army aviators and crew of the 2nd Battalion, 160th Special Operations Aviation Regiment (Airborne), recently detailed combat operations in Afghanistan using helicopters, including the Boeing MH-47E Special Operations Chinook.

The men and women of the 160th, also known as the "Night Stalkers," have compiled a remarkable record in just two decades of service. Created after the failed attempt to rescue Americans held hostage in Iran in the late 1970s, the Night Stalkers' mission is to handle any assignment involving rotorcraft - which means just about everything - anywhere in the world, any time, at a moment's notice.

To meet these demanding requirements, the Ft. Cambell, Ky.-based unit has developed unique capabilities and flies specially configured helicopters, including the 2nd Battalion's MH-47E Special Operations Chinooks. Since its inception, the unit has handled vital missions in every major U.S. combat action and many others that will never be publicized.

During the briefing, held last month and attended by national news and aerospace reporters, veteran aviators and air crewmen - who remain anonymous for security reasons - discussed their harrowing missions in Afghanistan. All agreed that among U.S. and allied military helicopters, the Chinook is the only one that could fly with the full loads of troops and equipment needed for combat assaults over Afghanistan's high mountains and rugged terrain. The MH-47Es, with long-range fuel tanks, an aerial refueling probe, multimode radar and forward-looking infrared sensors, provided an extra edge for these missions. They can fly nearly 150 miles per hour just a few feet off the ground, at night and in bad weather.

In the first six months of the war against terrorism, Night Stalker Chinooks flew more than 200 combat missions totaling about 2,000 flight hours. The Chinooks flew as high as 16,000 feet (which forced crews to use oxygen systems) for as long as 15 hours. More than 70 of these missions, flown in the war's first three months, involved infiltration or removal of special operations troops behind enemy lines. Throughout, the Chinooks maintained a 99-percent mission readiness rate.

During Operation Anaconda in northeast Afghanistan, the MH-47Es proved their combat mettle. Taliban and Al Qaeda forces zeroed in with machine guns and rocket-propelled grenades on Night Stalker Chinooks as they landed troops during the battle.

One Chinook took off and flew out of the trap to safety with wounded crew and badly damaged electrical and hydraulic systems. Unfortunately, enemy gunfire killed a Navy SEAL, who fell from the aircraft during its escape. Attacks also damaged a second Chinook as it unloaded troops sent to search for him and brought down a third as it landed reinforcements, five of whom were killed in action. Both pilots and one gunner in the third aircraft were wounded, and the second gunner lost his life.

Later, Chinooks returned to pick up the American troops, who destroyed the enemy stronghold. Despite severe combat damage, all but one of the Chinooks involved are expected to return to flight.

As the discussion ended, a Night Stalker pilot summed up his colleagues' feelings about their MH-47Es. "We couldn't have done it without the Chinooks," he said. 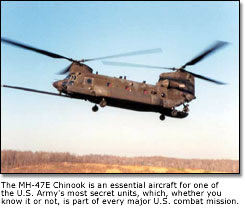