Odom to take command of Rangers 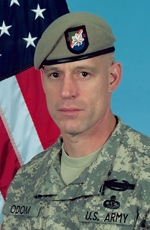 FORT BENNING (USASOC News Service, July 26, 2011) – Col. Mark W. Odom will assume command of the 75th Ranger Regiment from Col. Michael E. Kurilla during a change of command ceremony at 9 a.m. July 28 on the National Infantry Museum’s Soldiers Field.
Odom served as the commander of the 2nd Battalion, 75th Ranger Regiment, Joint Base Lewis-McChord, Wash., and recently graduated from the National War College in Washington, D.C.
Kurilla, who assumed command of the Regiment on August 6, 2009, has a follow-on assignment to Fort Bragg, N.C.
Media who wish to attend this event should call the Public Affairs Office at 706-545-4260 or 706-604-5114.
About the 75th Ranger Regiment
The 75th Ranger Regiment is a direct-action special operations raid force that conducts forcible entry operations and special operations raids across the entire spectrum of combat.
The Regiment is capable of planning and executing complex worldwide operations in high-risk, uncertain, and politically sensitive areas. It is constantly transforming to meet future operational requirements without sacrificing mission success.
The Regiment’s four battalions geographically located throughout the U.S., can deploy anywhere in the world for no-notice missions.
Their capabilities include direct action raids in limited visibility, adverse weather, varied terrain and complex operating environments to capture or kill designated targets and/or seize terrain and strategic installations.
Capable of infiltrating by land, sea or air, the 75th Ranger Regiment is trained on a wide variety of mobility platforms and operates fully integrated with supporting agencies and other Special Operations Forces as required.
The unit has an intensive regimental assessment and selection process where only the most exceptional officers, non-commissioned officers, and Soldiers are selected to serve.
From the arduous training to the continuous and demanding worldwide deployments, the Rangers of the 75th Ranger Regiment continue to demonstrate their motto, “Rangers Lead the Way.”

That unit description makes me want to enlist again.

He was my old BC, AWESOME guy.

I
Medical personnel in 75th RR