Pakistani troops have fired warning shots at two US helicopters forcing them back into Afghanistan, local Pakistani intelligence officials say.
The helicopters flew into the tribal North Waziristan region from Afghanistan's Khost province at around midnight, the reports say.
Tensions have risen after an increase in US attacks targeting militants.
The incident comes amid mounting security fears after a militant bomb attack on the Islamabad Marriott hotel.
Pakistan's army has said it will defend the country's sovereignty and reserves the right to retaliate to any border violations.
The government has said it will take targeted action against the militants, promising raids in some "hotspots" near the border with Afghanistan.
Meanwhile in the city of Peshawar, Afghan consul Abdul Khaliq Farahi was kidnapped after six unidentified men ambushed his car, officials say. His driver died in the attack.
'Firing in the air'
Last week Pakistani troops fired into the air to prevent US ground troops crossing the border into South Waziristan. 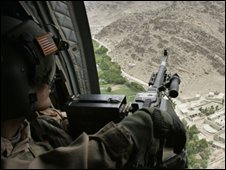 The latest confrontation between US and Pakistani forces took place in North Waziristan's sparsely populated Ghulam Khan district, west of the main town in the region, Miranshah, local officials say.
They told the BBC that troops at border posts in the mountainous region fired at two US helicopters which crossed into Pakistani territory.
The helicopters returned to Afghanistan without retaliating.
A senior security official based in Islamabad told the AFP news agency that the helicopters had been repelled by both army troops and soldiers from the paramilitary Frontier Corps (FC).
"The helicopters were heading towards our border. We were alert and when they were right on the boundary line we started aerial firing. They hovered for a few minutes and went back," the official said.
"About 30 minutes later they made another attempt. We retaliated again, firing in the air and not in their direction, from both the army position and the FC position, and they went back."

A Pakistani military spokesman, Maj Murad Khan, said he had no information "on border violation by the American helicopters".
The US military in Afghanistan also said it had no information on the incident.
The BBC's Barbara Plett in Islamabad says after increased American incursions this month, the army stressed that it reserved the right to retaliate.
Our correspondent says standard procedure would be to first fire warning shots.
'Crisis in relations'
The two countries held talks last week on anti-militant co-ordination. 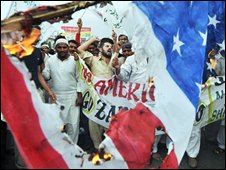 Anti-US feelings are on the rise in Pakistan

America's top military officer, Admiral Mike Mullen, flew to Islamabad to try to calm the crisis in relations but tensions remain high, our correspondent says.
As well as reported incursions, there have been a number of US missile attacks aimed at militants in Pakistan territory in recent weeks.
The Americans stepped up their strikes after criticism that Pakistani troops were unable or unwilling to eliminate Taleban sanctuaries along the border.
Waziristan is one of the main areas from which Islamist militants launch attacks into Afghanistan.
It emerged earlier this month that US President George W Bush has in recent months authorised military raids against militants inside Pakistan without prior approval from Islamabad.
Pakistan reacted with diplomatic fury when US helicopters landed troops in South Waziristan on 3 September. It was the first ground assault by US troops in Pakistan.
Pakistan's army has warned that the aggressive US policy will widen the insurgency by uniting tribesmen with the Taleban.
Click to expand...

This is going to get ugly!

I need to get my arse in that area of the toilet bowl!
B

If I was a mini gunner on a helo id die from having a permanent hardon! :cool:
7

Read "repelled US raid" as "We ran for our chicken-sh*t lives when we heard the helicopters."

US officials say US troops killed, injured in Iraq attack