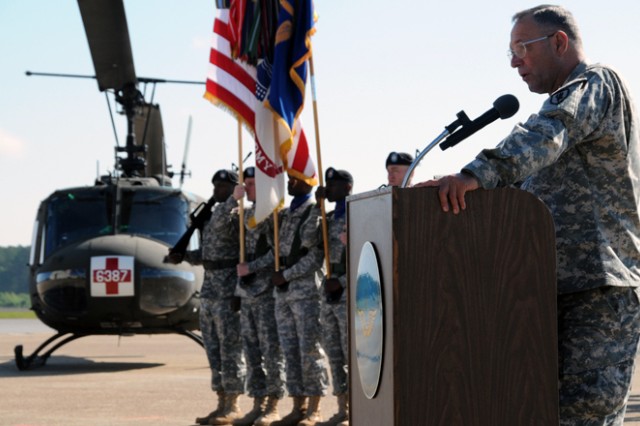 FORT RUCKER, Ala. -- Hundreds of Fort Rucker community members and leaders from the local area gathered at Cairns Army Airfield May 17 to bid farewell to a beloved "Family member," the UH-1 Iroquois, affectionately known as the Huey.

The last three UH-1s operating with the Army out of Fort Rucker were retired during a ceremony at Cairns; however, Hueys will still fill the skies over the Wiregrass as the Air Force operates them, known as TH-1Hs, out of the air field as part of its rotary-wing training program, according to Lisa Eichhorn, public affairs officer.

"That's why we're here today - to say goodbye to a Family member," Crutchfield said. "This is an incredible machine, as you all know. And it served us proudly for over 52 years. It was first introduced in 1959, and in its first 20 years of service, more than 7,000 of these aircraft served in combat in Vietnam and more than 16,000 were built and served all around the world.

"Many of us cut our teeth on this aircraft learning to fly," the general continued. "It has a special place in our hearts. Thank you for your outstanding 52 years of service."

Crutchfield then introduced CW4 Larry Castagneto, a safety officer with the 1st Aviation Brigade who flew the UH-1 in Vietnam, and among those with a special place in their hearts for the Huey.

"This is going to be a hard day," Castagneto said. "To be honest, it's a very sad day, an end of an era - an era that has spanned over 50 years - the retirement of this grand old lady, our mother, the Huey."

The chief warrant officer then gave some facts about the UH-1's storied career.

"It was 48 years ago to this month, in 1963, that the first Hueys arrived in Vietnam to units that would become the 145th and 13th Combat Aviation Brigades, both units still assigned here at Fort Rucker," he said. "While in Vietnam, the Huey flew approximately 7,457,000 assault sorties, 3,952,000 attack or gunship sorties, and 3,548,000 cargo supply sorties - over 15 million sorties over the paddies and jungles of Vietnam.

"And that does not to include the millions of other Soldiers flown all over the world and in other combat zones since then. What an amazing journey. I am so honored and humbled to have been a small part of that journey," he said.

Castagneto continued by saying those who flew, worked on or rode in the UH-1 knew how difficult it was for him to describe his feelings for the aircraft.

"We are the chosen few - we are the lucky ones," he said. "We understand what this aircraft means, for she is alive. She has a life of her own and has been a lifelong friend. She is as much a part of me and my fellow brothers as the blood that flows through our veins. Try to imagine all of those that have been touched by the shadow of her blades."

And that shadow extended well past Vietnam and even continues to touch the young Aviators of today, he added.

"They may love their Apaches or Blackhawks, but they will say there is no aircraft like flying a Huey. It is special," Castagneto said. "There are two kinds of helicopter pilots: those who have flown the Huey, and those who wish they could.

"So with that I say to her, that beautiful lady, sitting out there, from me and all my lucky brothers who were given the honor to serve their country and the privilege of flying this great lady in the skies of Vietnam, I say 'thank you' for the memories, 'thank you' for always being there, 'thank you' for always bringing us home no matter how beat up or shot up you were - you will never be forgotten," he said. "We loved you then, we love you now, we will love you until our last breath.

"And as the sun sets today, if you listen closely, you will hear that faint whop, whop, whop of our mother speaking to all her children, past and present, who rode her into history in a blaze of glory," he continued. "And she will be saying to us, 'I am here, I will always be here with you. I am at peace, and so should you be, and so should you be.'"

The UH-1 is still flown by the Army, Air Force and other services, Eichhorn said, adding that two of the three Hueys will retire among their brethren at other Aviation museums - with one going to Fort Rucker's own U.S. Army Aviation Museum and another going to the Army Aeromedical Evacuation Museum at Fort Sam Houston, Texas. The destination for the third Huey was unavailable at press time.

"It was 48 years ago to this month, in 1963, that the first Hueys arrived in Vietnam to units that would become the 145th and 13th Combat Aviation Brigades, both units still assigned here at Fort Rucker," he said. "While in Vietnam, the Huey flew approximately 7,457,000 assault sorties, 3,952,000 attack or gunship sorties, and 3,548,000 cargo supply sorties - over 15 million sorties over the paddies and jungles of Vietnam."

It's hard to get much more of an impressive record than that. The bird was a Cold War warrior and carried us all through many a day. We road many a mile, roped from them, jumped from them, it seemed like there was little this bird couldn't do as a platform in it's supporting role.

Pistol_Pete said:
"It was 48 years ago to this month, in 1963, that the first Hueys arrived in Vietnam to units that would become the 145th and 13th Combat Aviation Brigades, both units still assigned here at Fort Rucker," he said. "While in Vietnam, the Huey flew approximately 7,457,000 assault sorties, 3,952,000 attack or gunship sorties, and 3,548,000 cargo supply sorties - over 15 million sorties over the paddies and jungles of Vietnam."

It's hard to get much more of an impressive record than that.
Click to expand...

That's absolutely amazing. I had no idea they were used to that extent. Thanks for the article Ravage.

Great old bird.....always wondered why we never used the updated hueys systems like the Bell 412HP or similiar.

Who hated rappeling out of it though? I hated the floor mounted hook up cable....

I know that pilot is the correct term for some one who flies helicopters. I can tell you there were people who flew the Huey that far exceeded that term. They were able to perform manuevers on a hot area that could only be called brilliant artistic manuevers. There are a lot of people alive today because of that little bird and her crews. We will miss you!
Bill

Another reminder that I am old.
Ravage-do you have a link?

Ravage said:
There You go:
http://www.army.mil/article/56807/Post_honors_UH_1_Huey_as_aircraft_retires/
Click to expand...