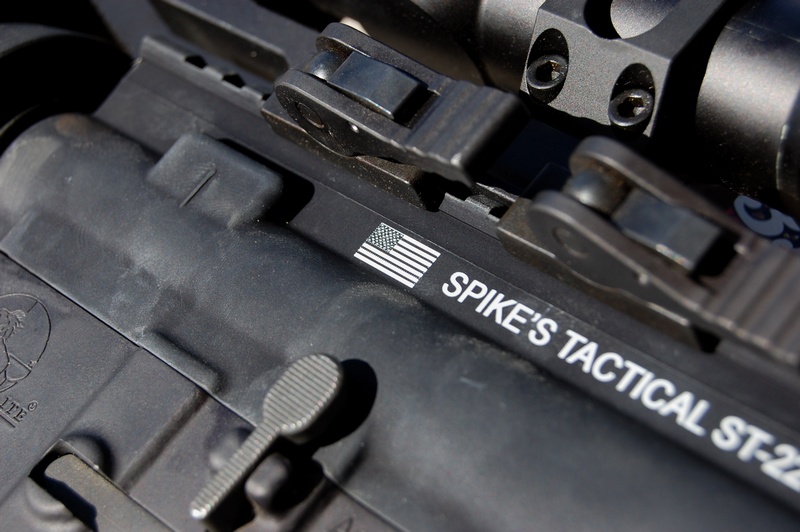 Found this on the doorstep when I got home from the range. Loaded it up and went back. Only shot about 80rds through it. Might of been enough to get the initial rough feeding and extracting out of the way.

I will take it out in the AM and put a scope on it, just to see how accurate it is, then either a 1-4x or red dot.

Bit windy for shooting a .22 at 50yds today. Scope was already on so gave it a run with several brands of ammo. 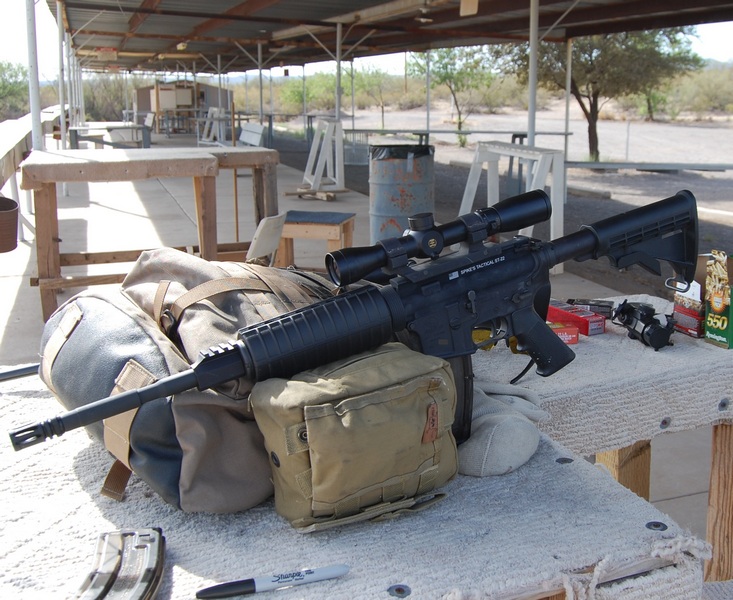 Tgt @50 yds., 1.5" pasties. Groups improved towards the end(except the Remington), maybe I was getting used to the pounding recoil.... 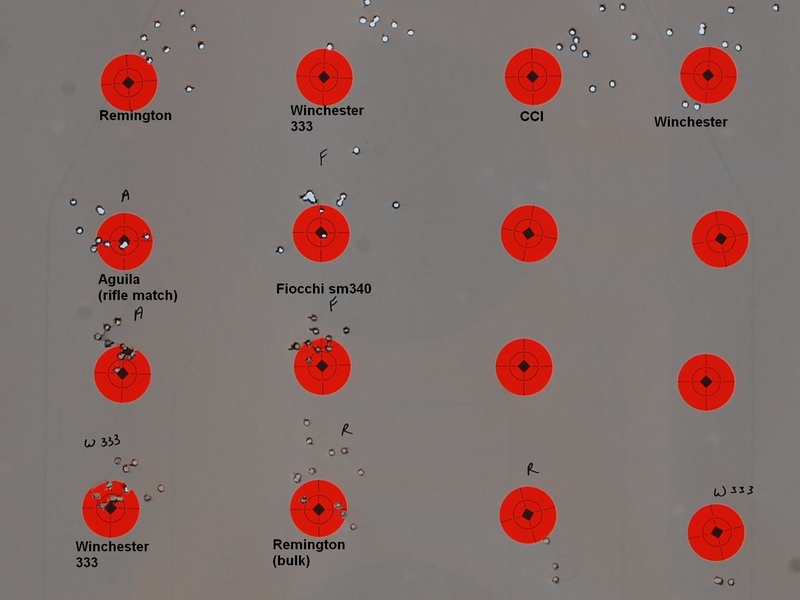 Two three shot groups at the bottom right were w/ the red dot at 25yds. The Winchester 333 will be the main ammunition I try and stock up on, best 'bang for the buck'. The Remington sucked. Probably ran about a 30% malfunction rate. Majority were failure to fire, the firing pin does not get a long bite into the rim and result in the failure to fire. None of the other brands seemed to have this problem.

Had one of these: 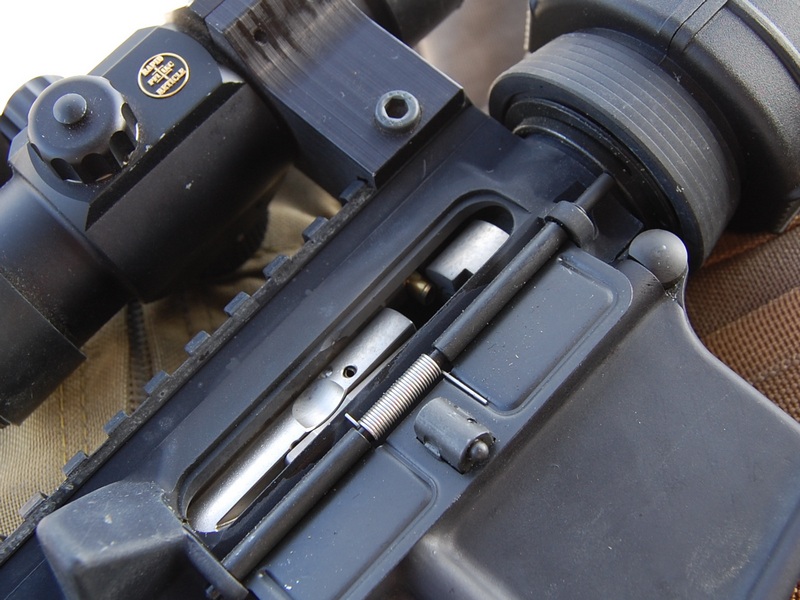 and a few of these: 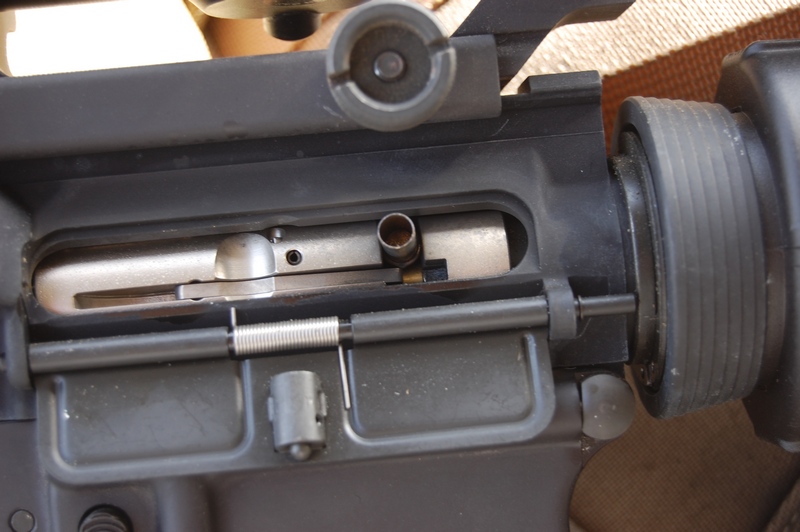 I started out with the weapon fairly 'dry', per directions. Added a bit of oil after a few hundred rounds and the reliability improved. 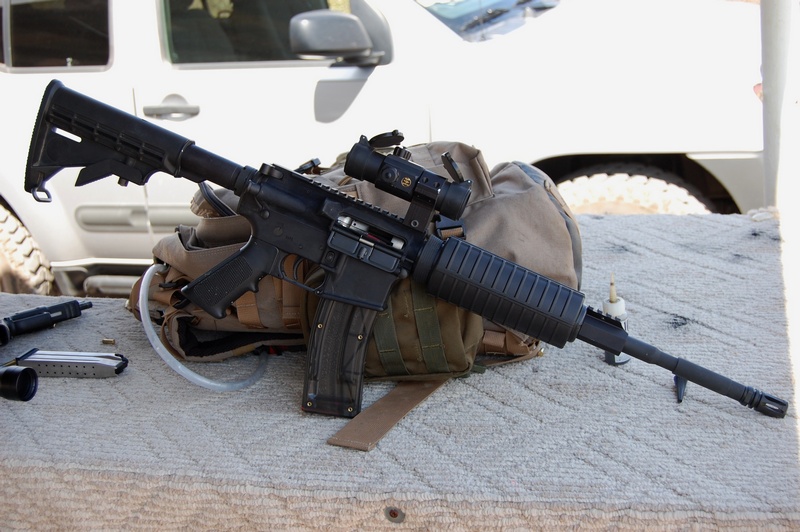 Cleaned it up and will hit the range with it again tomorrow.

Left the red dot on the upper and shot some five shot groups at 50yds, benched, pack, no rear rest: 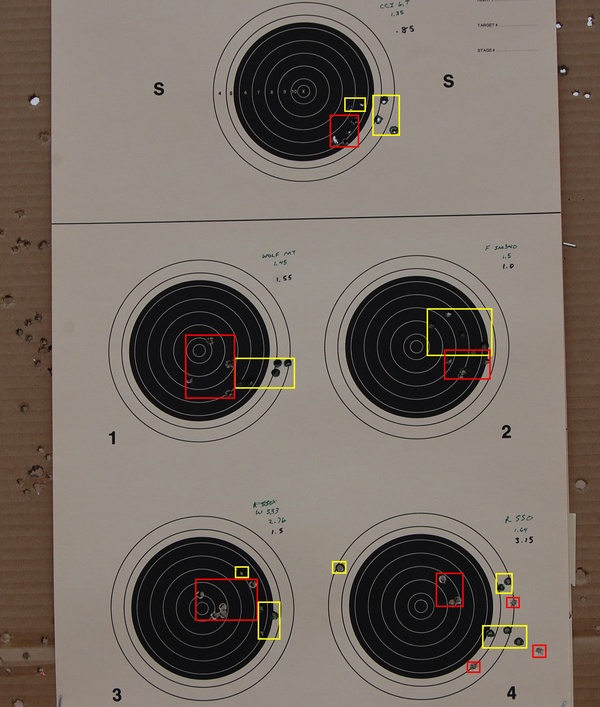 A person could probably get sub 1" consistently w/ the match ammo if using a scope and a solid bench/prone position.

I did a five shot string from; offhand(green), kneeling(yellow) and prone. CCI Green Tag @ 50yds: 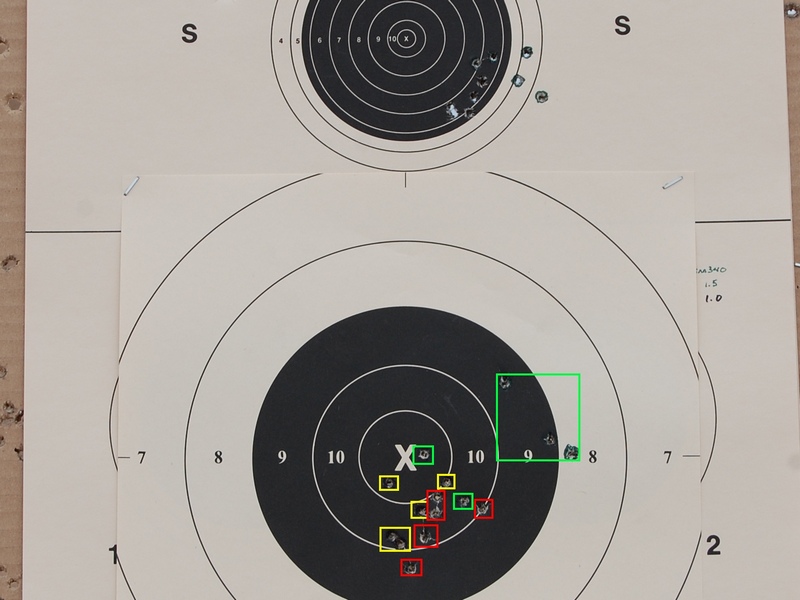 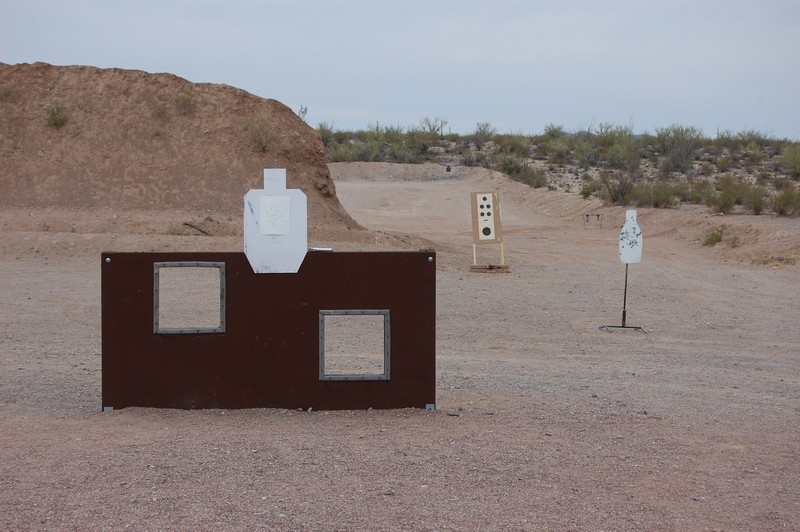 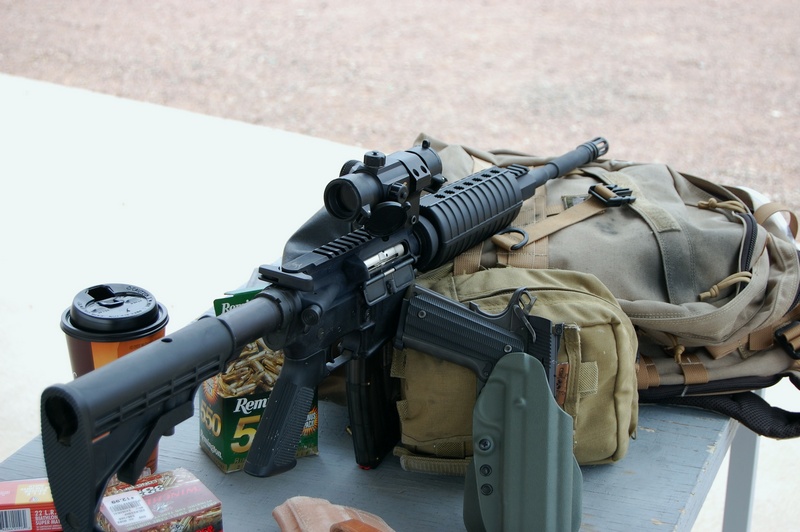 I like this Spike upper:
Works well for speed, transitions and accuracy drills.
Not good for malfunction drills and reloading drills.
A

Chad, nice post Bro! Thanks for the excellent report. :cool:

Today I wanted to give the Aguila another go. For "match" ammo I think it is the best deal going if you have a rifle that shoots it well. 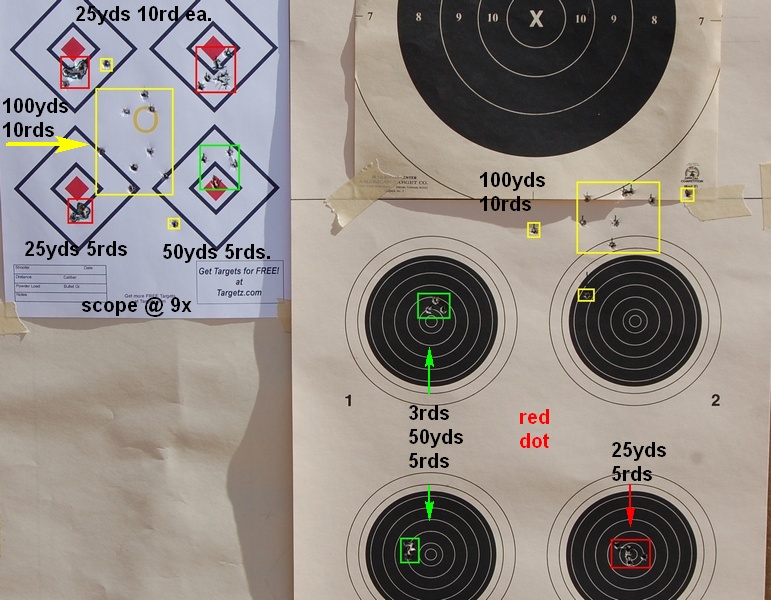 Finished the session w/ 100rds on the timer and also did some 'tactical' mag. changes. Rifle works good for these, just not a good idea for drills that require manipulation of the bolt release.

That afternoon went back for round two: 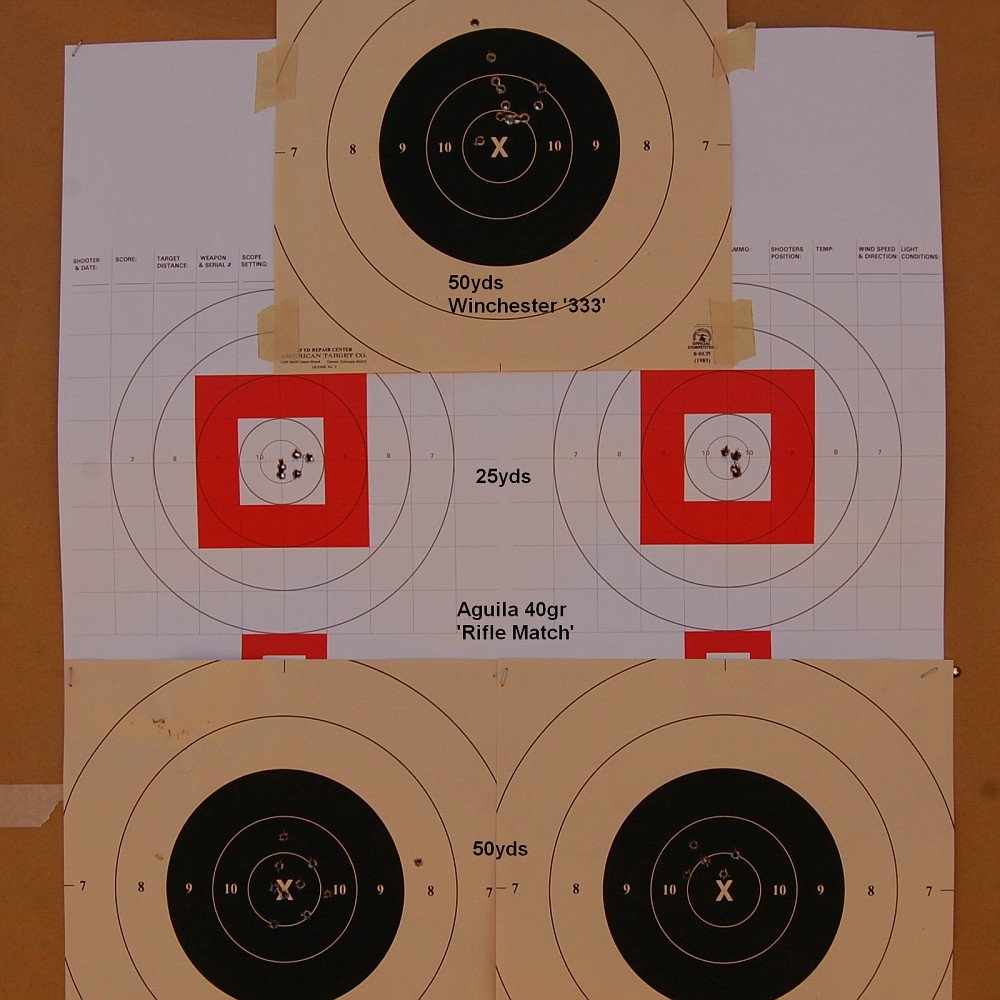 ETA: I was shooting across my pack, benched w/ a rear sand sock.
0

So do you think the .22 conversion kits are that accurate too?

I did not know they actually made a .22 AR Upper.

What do you do that all these toys just show up on your door step!!! I am jealous!!!! But then I am a Computer Geek now so not much need for tactical gear!!!

08steeda said:
So do you think the .22 conversion kits are that accurate too?

I did not know they actually made a .22 AR Upper.
Click to expand...

By conversion, you mean the bolt carrier .22 kit? I have no first hand experience with them. From what I have read, accuracy is not great; the barrel twist and diameter are not ideal for the .22lr bullet.

I think that there are three or four companies that make .22 uppers. There are also a few companies that are coming out with .22 carbines that look like the M4(type) carbine; S&W, Sig and Colt(?).
0

Chad...yeah that makes sense! I was just not thinking last night when I posted that. The barrel would make all the difference.

I wanted to give the 100yd line another go.

Aguila ammunition, sandbag and rear sock, scope 9x(outter row of tgts), red dot(center shots). The left tgts I shot a bit fast, trying to shoot during a lull in the wind, right side tgts I slowed down a little. 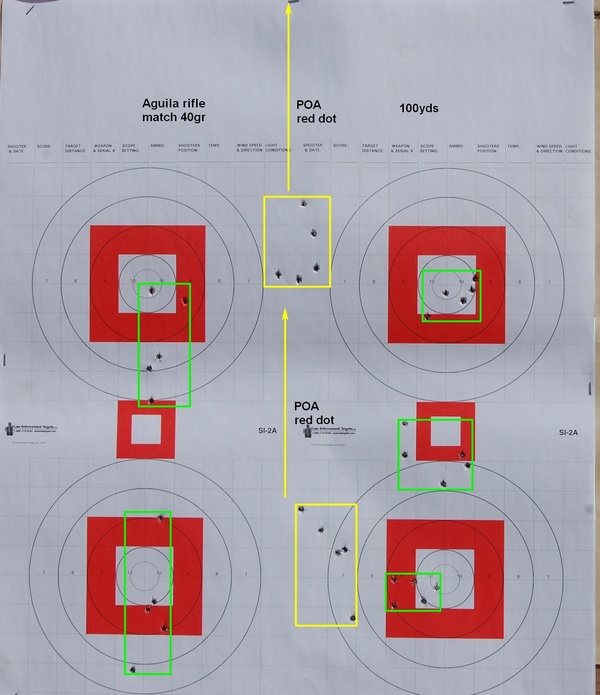 Did some position shooting w/ time. Nothing fancy, just shoot five rounds off of one normal breath of air: 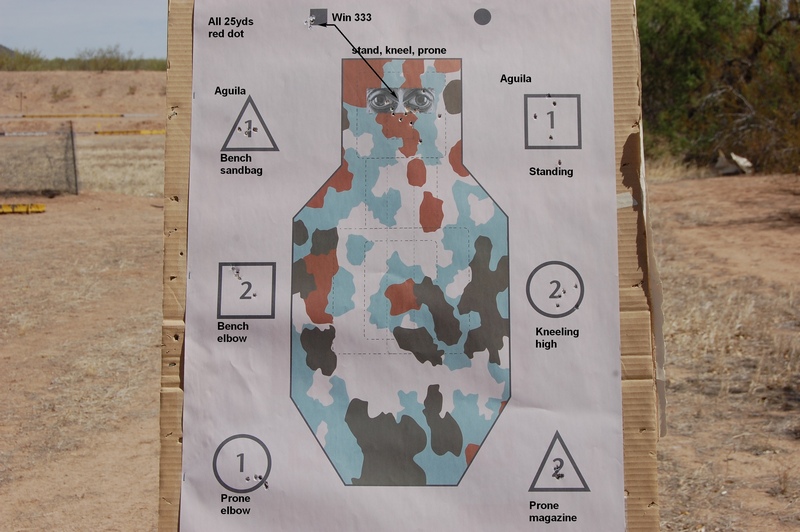 I confirmed the POA/POI for the Win 333 and then did a position transition drill; standing, kneeling, prone, 5rds ea.

I tried the Fiocchi sm340 again. Maybe the rifle was a bit dirty, blew the rim off and I had to scrape the brass out of the chamber....cleaned it after this incident: 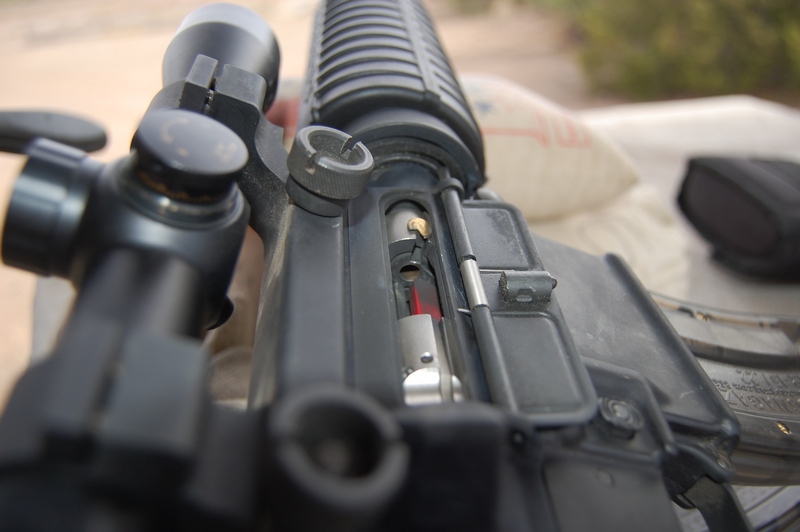 I guess that covers the initial run down. The upper is a good buy in my book and I would take it over my semi-custom 10/22 any day of the week.

I will shoot it for a few weeks, mostly on various timed drills and then run the 5.56 upper. I want to see how well the practice with the .22 carries over to the 5.56.
0

Thanks! Keep the info coming!!!

I work for PFI.

So, after a little over 4,500rds....about 30% was fired from a benched position and the rest was shot on drills for speed/multiple tgts/improvised positions etc. Shot steel and paper at ranges of 3yds to 200m. Tried it w/ our red dot, .22 scope and 1-4x. I will keep the red dot mounted.

Ammo:
CCI Blazer(750+rds fired) gets the nod as the pick for accuracy/reliability/cost
Aguila Intereceptor(750+) was the most reliable but gives up some accuracy and is about twice the cost of the Blazer.
Aguila Match(1000+) might edge the Blazer in absolute accuracy, is about as reliable, little less energy/velocity and costs a few $$ more.
CCI Mini Mag(200)- eh, did not impress
CCI Green Tag(100)- I forget, I think the Wolf was better
Remington Gold bullets(550+)- suck
Remington Lightning(500+) -accuracy sucks, ok reliability
Fiocchi sm340(20+)- suck
Winchester '333'(600+) good reliability/accuracy/price but the Blazer is better
Wolf(100+)- accurate but weak, same price range as the Aguila Int.
Federal(misc. bulk in ammo can)(200+rds)

Started out with some reliability problems(feeding, extraction and ignition) and found some information suggesting that reducing the recoil spring was a possible answer, trimmed some coils, decreased the length from about 8.75" to 7.25", and it seemed to help but not cure the problem. When I ordered the Aguila Int ammunition I also bought another recoil spring figuring that it would probably need to be longer due to the extra energy. They are around 11" and I trimmed it to 9.75" for a starting point. It has run great at that length for the majority of the ammunition....I think it is a little heavy for Wolf and the lower velocity stuff but runs great w/ stuff around 1100fps or faster.

Lubrication, hardly any. Two small dabs of grease on wear points for the rails is all that I have used and seems to work fine. Typically clean it *cough* about every 500rds....yes, I do. 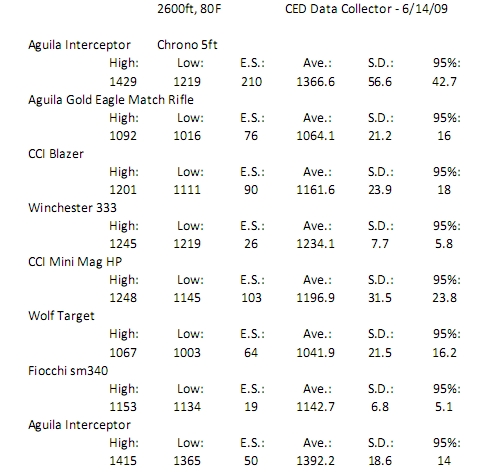 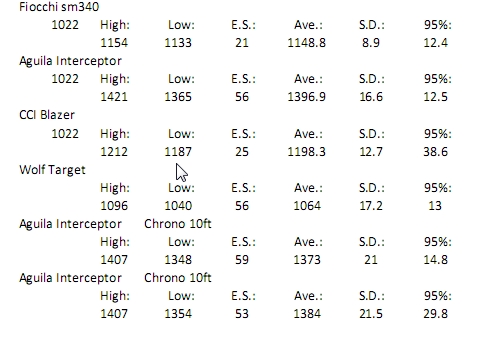 Last two strings were w/ the ST22 and 10ft from the muzzle. 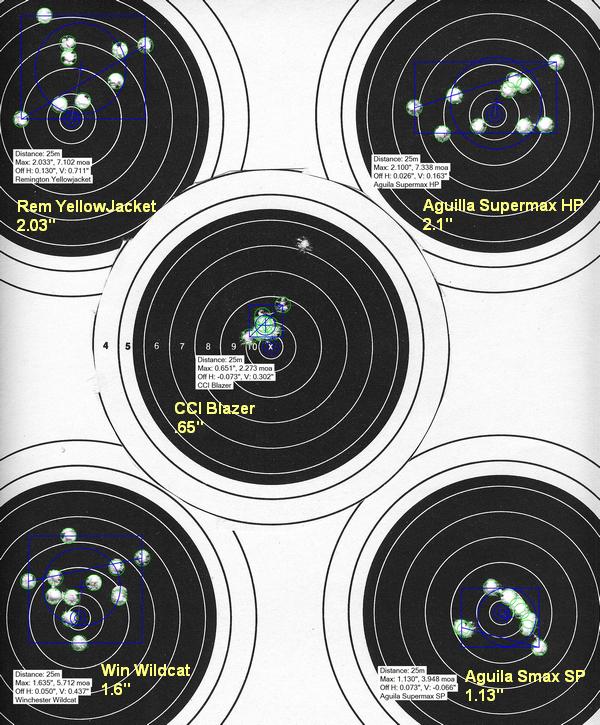 Blazer fired off a double, that is the high flyer way out of the group, did not count it. Blazer has been the standout for accuracy/price and very reliable....well, other than the occasional 2fer1. 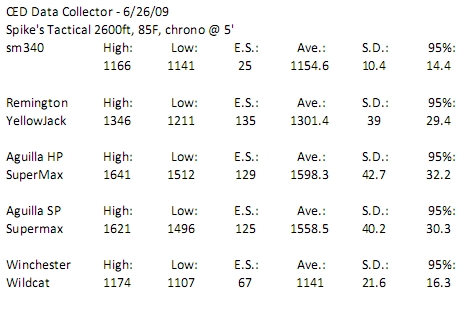 I built my SBR off of the Spike's Tactical .22 upper (5.5" bbl) and can't complain. Definitely worth the dedicated upper.

I started by confirming my POI at 100yds w/ the ST22 and CCI Blazer ammo: 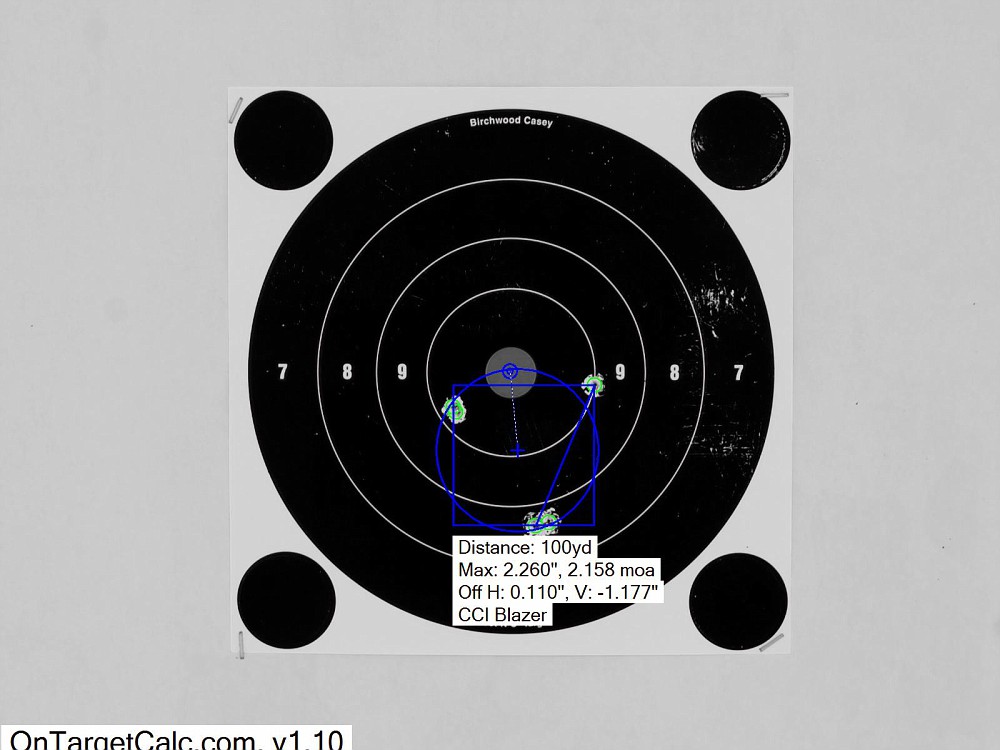 Did a quick check on POA w/ POI at various distances to see the variation between the two. Left side was shot w/ the Spike's Tactical and the right with my Armalite M-15A4C, both using a red dot sight. Three shot strings except at the 100. 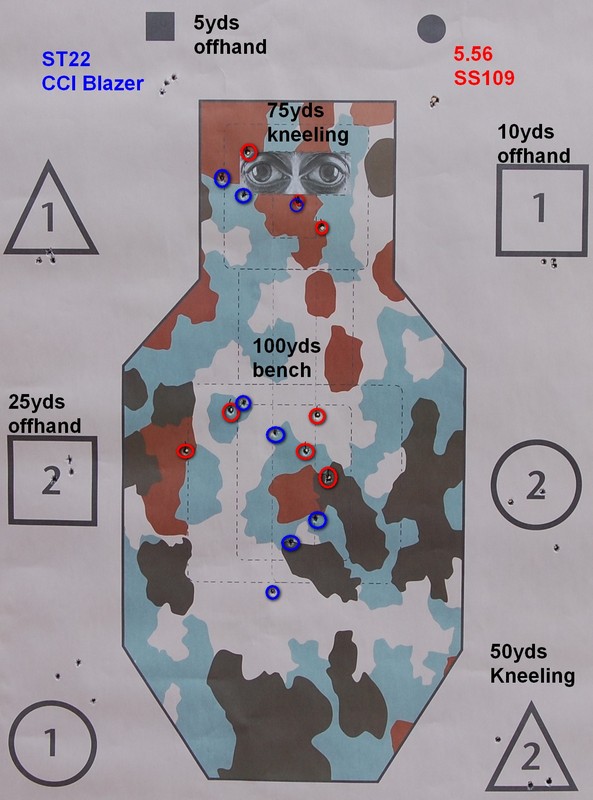 Everything seems to jive fairly well, the 50 is the biggest difference with the ST22 impacting about 3" high vs the M-15A4C. Shooting at center mass body though, it will not be enough of a variation to require a different aiming point.

I was going to do this as a video but, umm... the battery went dead, so-

Just did a series of two shot drills on the timer, I was looking for the variation in splits between the .22lr ammo and 5.56 55gr ammo.

I did a series at 11yds and then repeated it at 5yds. Both carbines are basically stock.

Exercise: from the low ready, index the target and fire two shots, record the time split of the two shots. Repeat. 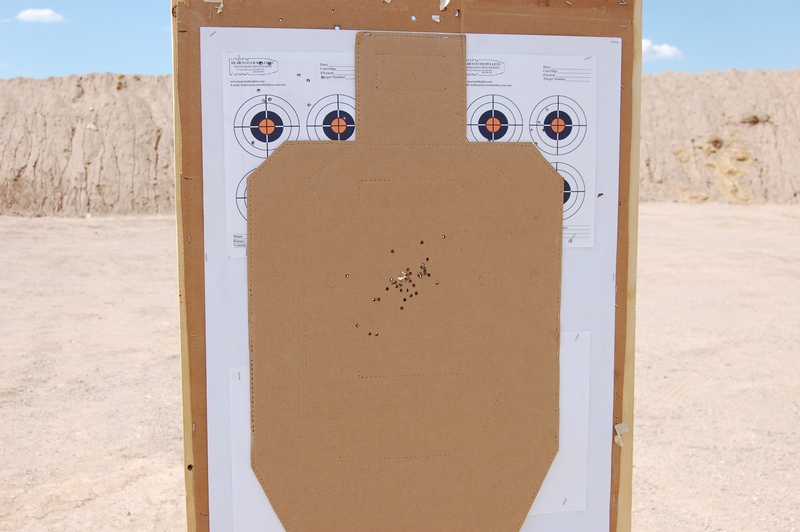 I did another run today. This time it was two targets, one at 10yds and one at 50yds. Shoot the 10yd target three times and the 50yd target once. I did this five times with each rig.

The split for the last shot, that is the transition from close to far target, averaged over the five strings, was 1.39 seconds w/ the M15a4 and 1.45 seconds w/ the ST22. 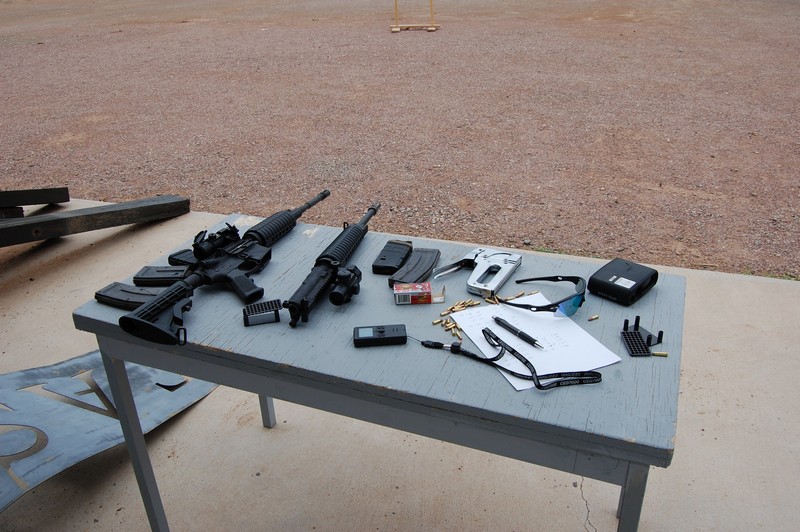 The ST22 is proving its worth. I've probably shot less than 80rds of 5.56 since I've started shooting the ST22. 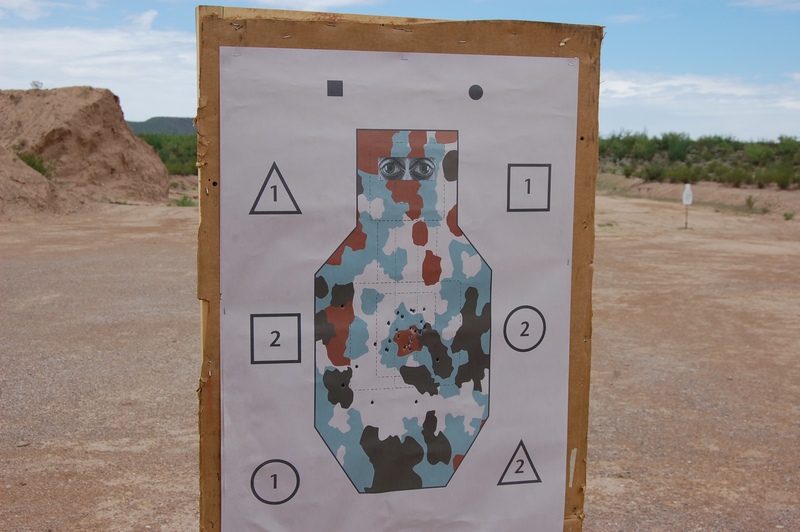 Next? Probably work on multiple targets and ... uh...my video skillz.
0

That is awesome! Dude you ROCK!!!!

So who is PFI? I googled it and came up with a tone on companies! But I assume you don't working for the Plumbing outfit!!!

08steeda said:
..So who is PFI? I googled it and came up with a tone on companies! But I assume you don't working for the Plumbing outfit!!!
Click to expand... 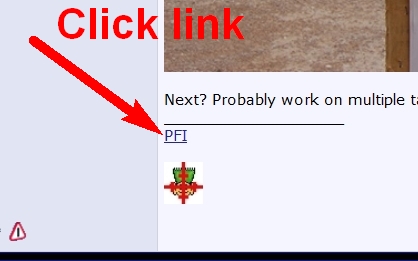