Another one bites the dust...

MANILA, Philippines - A top al-Qaida-linked militant accused of masterminding the kidnapping of three Americans who was long wanted by U.S. and Philippine authorities has been killed, the military said Wednesday.
Jainal Antel Sali Jr., popularly known as Abu Sulaiman a top leader of the Abu Sayyaf rebel group was fatally shot in a fierce gunbattle Tuesday in a clash with army special forces, military chief Gen. Hermogenes Esperon said.

Sulaiman is the highest-ranking Abu Sayyaf commander killed by U.S.-backed troops. Washington had offered up to $5 million for his capture.

"We have resolved that this group and their major commanders must be finished off, that this notorious group should see its end," Esperon told a news conference.

He also was accused of masterminding the kidnapping of three Americans and Filipino tourists from the southeastern island of Palawan in 2001.

One of the Americans, Guillermo Sobero, was beheaded. American missionary Gracia Burnham was wounded and rescued by army commandos after a year in jungle captivity, but her husband, Martin, was killed during the operation.

The kidnappings prompted Philippine authorities to allow the deployment of U.S. troops in the southern Mindanao region to train and arm Filipino soldiers working to wipe out the resilient Abu Sayyaf.

Villagers on the mountainous southern island of Jolo, a rebel informant and one of the wives of the slain rebel identified his body after the clash between the army's 8th Special Forces Company and about 60 Abu Sayyaf gunmen, about 590 miles south of Manila, Esperon said.

Esperon displayed a picture of the slain militant, then stood up to scribble an `x' mark across Sulaiman's face in a U.S. poster of most-wanted terror suspects.

Esperon said that Sulaiman's death could set off retaliatory attacks, but that the military was ready to thwart any such assaults.

"I believe the activities of the Abu Sayyaf will go down considerably," Esperon said.

Sulaiman, a 41-year-old civil engineer, began his activism by joining the Moro Islamic Liberation Front, a Muslim separatist group that signed a peace accord with the government in 1996.

He broke off from the MNLF due to the accord's signing and decided to work in Saudi Arabia for a few years building highways and buildings, according to police intelligence reports. In the late 1990s, he returned home and joined the Abu Sayyaf.

Having once been a builder, Sulaiman was asked by The Associated Press last year in a telephone interview why he would want to destroy.

He said their attacks were retribution for the many atrocities committed against Muslims worldwide. "I know that being once a builder of things would make me more efficient in destroying them," he said.
P

He said their attacks were retribution for the many atrocities committed against Muslims worldwide.
Click to expand...

That reasoning always makes me laugh: where would the world be if the Jews adopted that line of thinking. The Muslims think THEY have had it bad...we'd be going to town! ;)

Good. The three Americans who were kidnapped were treated so badly and did not deserve it.

And to any members of Abu Sayyaf who may come across these words remember this: 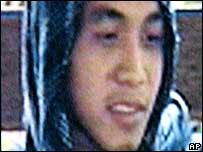 The army says Janjalani was killed in fighting in September

DNA tests on the body of a man found in a remote part of the Philippines have confirmed he was the leader of a Muslim rebel group linked to al-Qaeda.
Khaddafy Janjalani, head of Abu Sayyaf, was on a US terrorist list and wanted for killings, bombings and kidnappings.
Officials believe he was killed in clashes with troops in September 2006.
The news comes a few days after troops killed another senior Abu Sayyaf leader, Abu Sulaiman, in a gun battle on the southern island of Jolo.
It was in a remote part of the jungles of Jolo, near the town of Patikul, that Janjalani's remains were found in December 2006.

The Philippine army said captured rebels had led them to the grave. The captives said Mr Janjalani had been shot in the neck in an exchange with marines.
Scientists took tissue samples from his body which were compared at an FBI laboratory in the US with DNA samples taken from his brother Hector, who is currently in jail.
Abu Sayyaf is the smallest of four Muslim rebel groups in the Philippines, with about 400 members.
It is blamed for kidnappings and bombings, including an attack on a ferry in 2004 that killed more than 100 people.
Janjalani is the younger brother of Abu Sayyaf founder Abdurajak Abubakar Janjalani, and took over as leader following his death in 1998.
Military crackdown
This week Philippines officials announced that another key Abu Sayyaf member had been killed in a gun battle.
Abu Sulaiman, also known as Jainal Antal Sali, was fatally wounded in a clash with soldiers on the southern island of Jolo, the army's chief said. 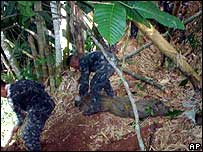 Sulaiman had a $5m bounty placed on his head by the US, in part for the 2001 abduction of a group of tourists on the island of Palawan.
The kidnapping resulted in the deaths of two Americans and several others. Sulaiman is also believed to have been involved in the bombing of a passenger ferry in the central Philippines in 2004, which killed at least 100 people. Philippine troops backed by the US began an offensive on Jolo in August last year, in an attempt to capture Mr Janjalani and Indonesian terrorism suspects Dulmatin and Umar Patek, who are thought to be in the region.
R

Another one bites the dust.

Russia looking for a prisoner swap…
2 3 4