Who Was Flying These Mysterious Blue Choppers in Iraq? 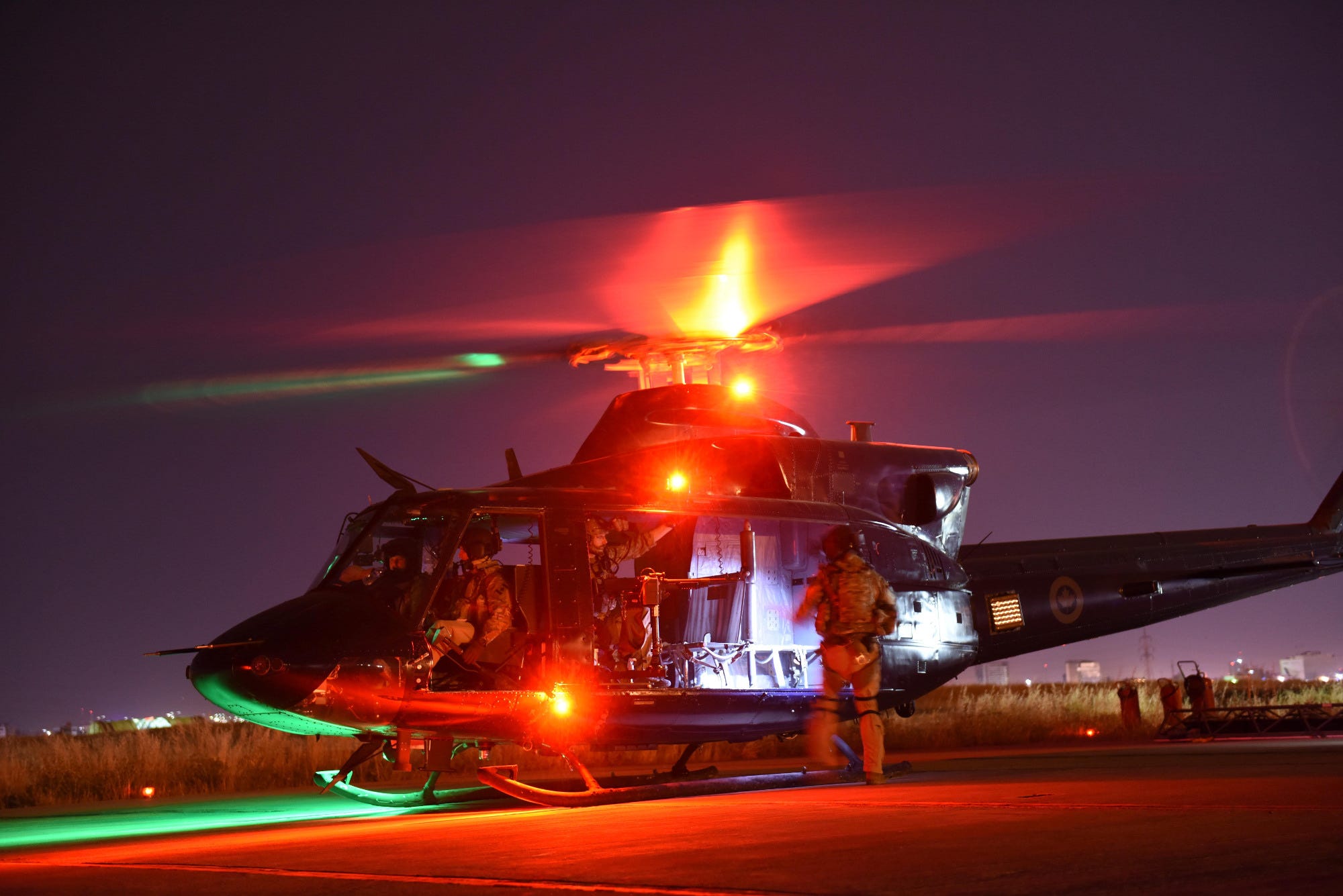 Who Was Flying These Mysterious Blue Choppers in Iraq?
Specialized Canadian squadron likes to keep a low profile

For five months in 2016, anyone who looked up in northern Iraq might have caught a glimpse of three odd, dark blue helicopters flying around. From a distance, these choppers would have looked a lot like civilian aircraft, but they were actually part of a unique Royal Canadian Air Force squadron.

Canada’s military is especially tight-lipped about its elite units and the 427 Special Operations Aviation Squadron is no exception. The deployment to Iraq between May and October 2016 offered an uncommon glimpse of the unit in action.

“A detachment of three helicopters from 427 Special Operations Aviation … provide essential tactical helicopter transportation,” reads the caption from what appears to be the only official photo from Iraq to mention the squadron by name.

Between May and October 2016, members of the 427 Special Operations Aviation Squadron shuttled around Canadian commandos working with the Kurdish Peshmerga. The paint job helped the CH-146 Griffons and their passengers keep a low profile in Iraq and elsewhere.

In 1942, the Royal Canadian Air Force first stood up the first iteration of 427 Squadron, which flew a variety of heavy bombers over Europe in World War II. In 1952, the unit reappeared as a fighter jet squadron.

In 1971, 427 swapped its CF-104 Starfighters for CH-135 Twin Huey helicopters. Eventually the crews traded those those in for newer CH-146 Griffons. 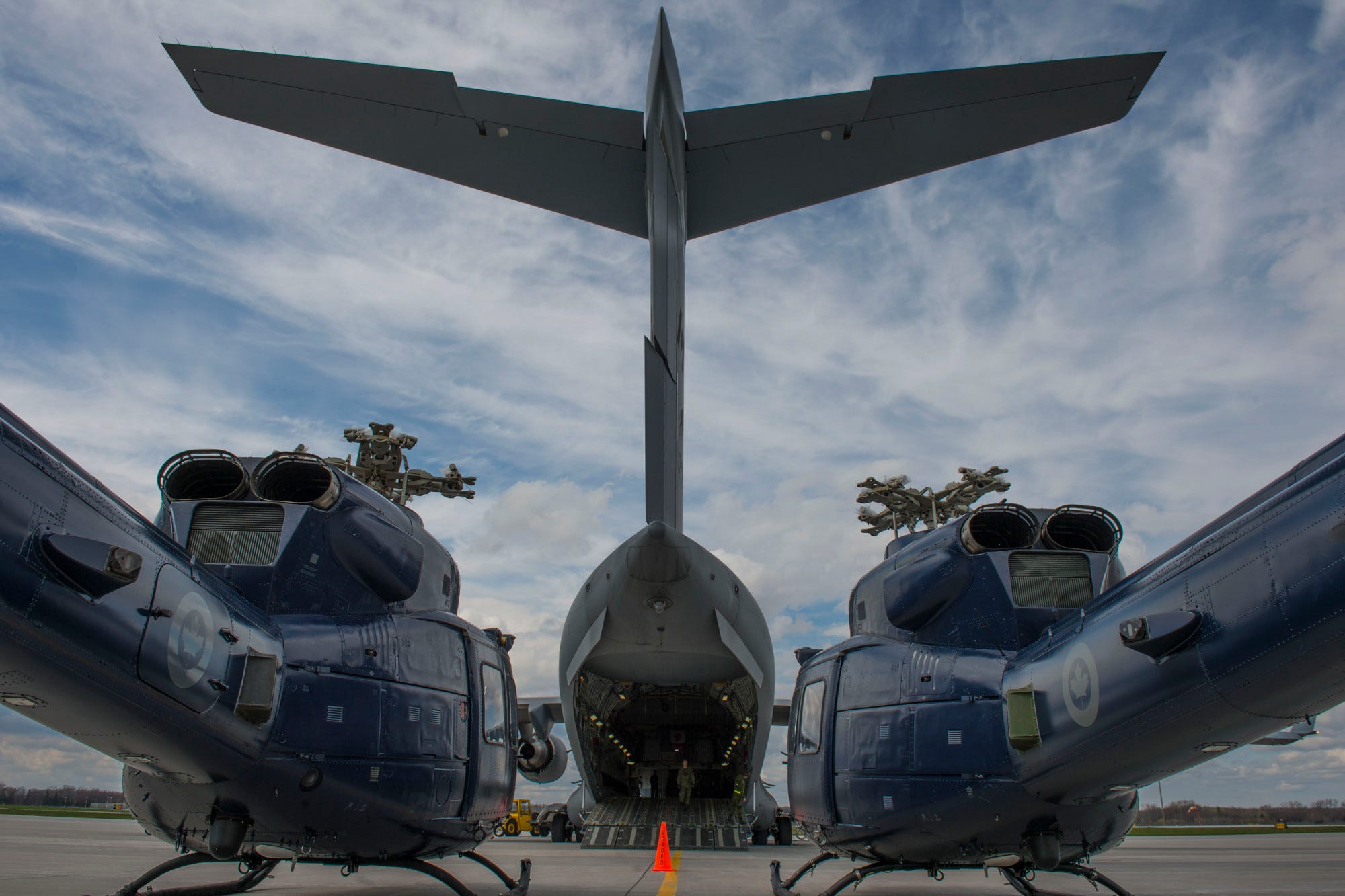 Above — crews prepare 427’s CH-146s for their trip to Iraq. At top — one of the Griffon’s in Iraq. Canadian Forces photos
Derived from Bell’s iconic Vietnam War-era Huey helicopter, the CH-146 is significantly more powerful. The Griffon has a top speed of 160 miles per hour and can carry up to 10 passengers depending on the situation.

The helicopters can fly more than 400 miles without needing to stop and refuel. By comparison, the older Twin Hueys were nearly 30 miles per hour slower and had a range of less than 300 miles.

Machine guns and decoy flares provide defenses against enemy troops and light surface-to-air missiles. Though not clearly visible on any of the aircraft Canada sent to Iraq, ground crews can fit powerful night-vision cameras if necessary.

In 2006, the squadron and its choppers joined the newly formed Canadian Special Operations Forces Command — comparable to U.S. Special Operations Command. Like their American counterparts, Canada’s elite troops perform secretive counter-terrorism missions, work with and train foreign troops and are on call in case of crises around the world.

“We don’t talk about deploying units,” Brig. Gen. Mike Day, then the Canadian Forces’ top commando officer, told Defense News in 2008, according to a U.S. Joint Special Operations University report. “We talk about deploying special operation task forces, which are absolutely an amalgam of all the parts of this command.” 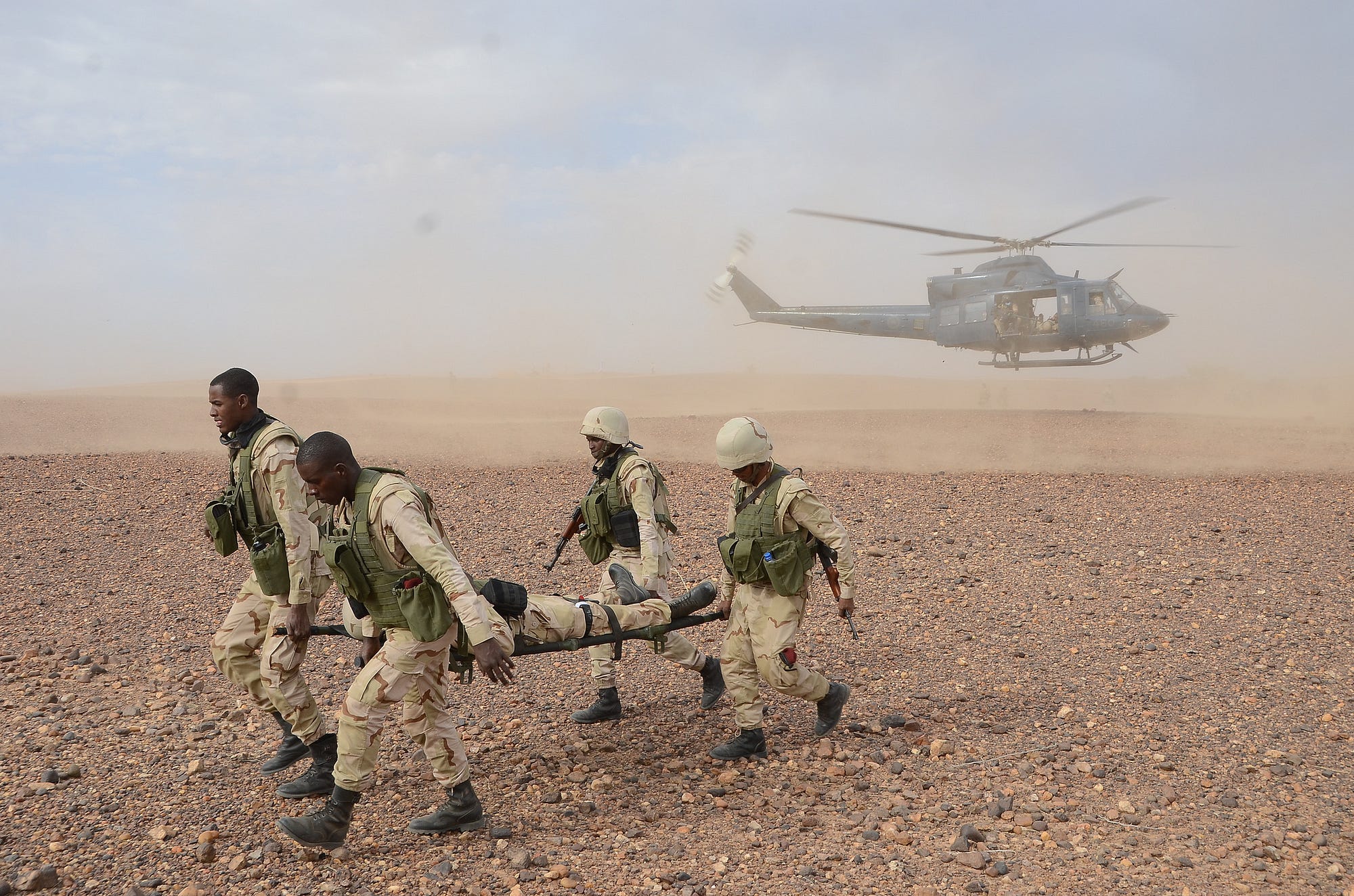 One of 427’s CH-146’s in Niger in 2014. U.S. Army photo
As of 2016, 427 Squadron is still the only aviation element specifically set up to work with Canada’s elite forces. To help keep the helicopters and their missions discreet, like some of the U.S. Air Force’s elite units, the squadron adopted a civilian-style paint scheme.

Bell still makes the civilian version, the Model 412EP, and has sold them around the world to private customers and other military forces and law enforcement groups. With their unimposing look, the Canadian special operations choppers can easily blend in at regular airports or foreign bases.

But the squadron has definitely been active over the past decade. In February 2014, one of the trademark blue choppers turned up in Niger for the Pentagon’s premier special operations war game in Africa, nicknamed Flintlock.

The next year, Canadian Combat Camera photographers caught one of the helicopters during a training exercise near 427’s home base in Petawawa, Ontario. In both cases, the official captions did not name the unit.

“Information on Canadian special operations forces deployments and operations are not available due to operation security,” was all a Canadian Forces public affairs officers would say about the operations in Africa in an email to War Is Boring in July 2014. “Thank you in advance for your understanding.” 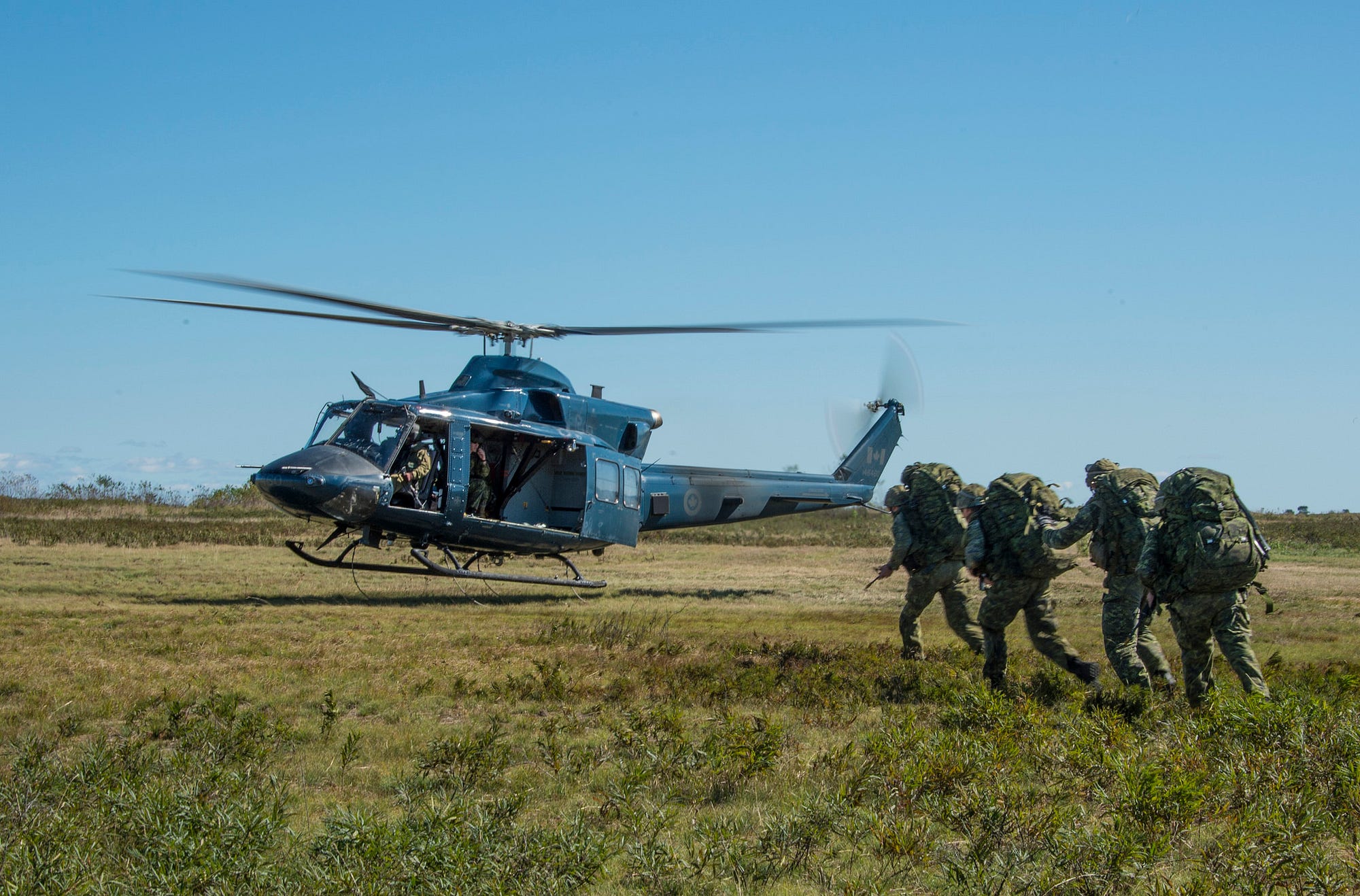 Troops train in Petawawa, Ontario in 2015 with one of 427’s Griffons. Canadian Forces photo
And then came the squadron’s trip to Iraq in 2016. Again, Canadian officials said very little about the helicopters or the rest of Canada’s elite contingent working with Kurdish forces in Iraq.

“We don’t want to give [Islamic State] an edge,” Canadian Forces Brig. Gen. Peter Dawe, the deputy chief of Canada’s commando headquarters, said at a press conference in October 2016. “We don’t want them to know how often we’re at the line.”

By that point, however, Canadian officials had apparently determined there was no more need for the unassuming blue choppers. On Oct. 6, 2016, crews with three traditionally camouflaged CH-146s from 430 Tactical Helicopter Squadron — a regular Royal Canadian Air Force helicopter unit — replaced the elite aviators in Iraq.


“The tactical aviation detachment will provide air mobility capability in northern Iraq as the Iraqi security forces, backed by the Coalition, reclaim their country from Daesh,” Brig. Gen. Shane Brennan, Canada’s top officer in Iraq, said in a statement, using another term for Islamic State.

While we don’t know which specific operations the 427’s fliers are supporting now, the squadron’s uniquely painted choppers are undoubtedly ready for more specialized missions — if they aren’t already flying somewhere around the world already.

Who Was Flying These Mysterious Blue Choppers in Iraq?
Click to expand...

I agree. Great article about the Blue Choppers.

Be sure to open the entire article and click on the very bottom blue print line for a better view of the pics in the article.

I will always love Hueys in whatever form they take.