Interesting article on how Al Qaeda has has reorganized it's infamous paramilitary groups.
Quote:

Al Qaeda has reorganized its notorious paramilitary formations that were devastated during the US invasion of Afghanistan in 2001 and 2002. Al Qaeda has reestablished the predominantly Arab and Asian paramilitary formation that was formerly known as Brigade 055 into a larger, more effective fighting unit known as the Lashkar al Zil, or Shadow Army, a senior US intelligence official told The Long War Journal. The Shadow Army is active primarily in Pakistan's tribal areas, the Northwest Frontier Province, and in eastern and southern Afghanistan, several US military and intelligence officials told The Long War Journal on condition of anonymity due to the sensitivity of the subject.

The paramilitary force is well trained and equipped, and has successfully defeated the Pakistani Army in multiple engagements. Inside Pakistan, the Shadow Army has been active in successful Taliban campaigns in North and South Waziristan, Bajaur, Peshawar, Khyber, and Swat. In Afghanistan, the Shadow Army has conducted operations against Coalition and Afghan forces in Kunar, Nuristan, Nangahar, Kabul, Logar, Wardak, Khost, Paktika, Paktia, Zabul, Ghazni, and Kandahar provinces.

"The Shadow Army has been instrumental in the Taliban's consolidation of power in Pakistan's tribal areas and in the Northwest Frontier Province," a senior intelligence official said. "They are also behind the Taliban's successes in eastern and southern Afghanistan. They are helping to pinch Kabul." Afghan and Pakistan-based Taliban forces have integrated elements of their forces into the Shadow Army, "especially the Tehrik-e-Taliban and Haqqani Network," a senior US military intelligence official said. "It is considered a status symbol" for groups to be a part of the Shadow Army.

The Tehrik-e-Taliban is the Pakistani Taliban movement led by Baitullah Mehsud, the South Waziristan leader who has defeated Pakistani Army forces in conventional battles. The Haqqani Network straddles the Afghan-Pakistani border and has been behind some of the most high-profile attacks in Afghanistan. The Shadow Army's effectiveness has placed the group in the crosshairs of the covert US air campaign in Pakistan's tribal areas. In October 2008, the US killed Khalid Habib al Shami, the leader of the Shadow Army, in a strike on a compound in North Waziristan.

A look at the Shadow Army

The presence of the Shadow Army has been evident for some time, as there have been numerous reports of joint operations between the Taliban, al Qaeda, the Haqqani Network, Hizb-i-Islami, Lashkar-e-Taiba, Harkat-ul-Jihad Islami, and other terror groups. In January 2008, The Long War Journal noted that the various terror groups were cycling through the numerous camps in the tribal areas and have organized under a military structure. While the Shadow Army has been active, there has been little visual evidence of its existence until now. The Long War Journal has obtained a photograph of a unit from the Shadow Army operating in Pakistan's Taliban-controlled district of Swat.

The photograph was taken some time in January of this year. It shows what appears to be either a reinforced squad or two squads of foot soldiers. Fourteen fighters are in view, and others appear to be in the far background. All of the fighters are wearing masks, new clothes, sneakers, and web gear. One fighter is wearing a Camelbak. The weapons are uniform; six AK-47s and one RPG are in view. A look at the clothing of the fighters gives a good indication of the identity of the fighters, an expert on al Qaeda told The Long War Journal. The length of the pants of pictured fighters is described as being at "al Qaeda height" -- meaning only al Qaeda and allied "Wahhabi/Salafi-jihadis" wear their pant legs this high.

"The extremists who follow al Qaeda's religious beliefs think that pants must be at least six inches above the ground because there's a hadith [a saying of the Prophet Mohammed] that says clothes that touch the ground are a sign of pride and vanity," the expert said. "This, along with the new dyeing of men's beards red or yellow is a sure sign of al Qaeda-ization."

The type of masks worn and the tennis shoes are also strong indicators that these fighters "are non-Afghan fighters," an expert on the Taliban in Afghanistan and Pakistan said. "Those types of masks I have seen, and they are always on the Pakistani side of the border," the expert said. "The tennis shoes and socks are a big indicator that they are non-Afghan fighters, probably Pakistanis or Arab/Central Asian fighters." 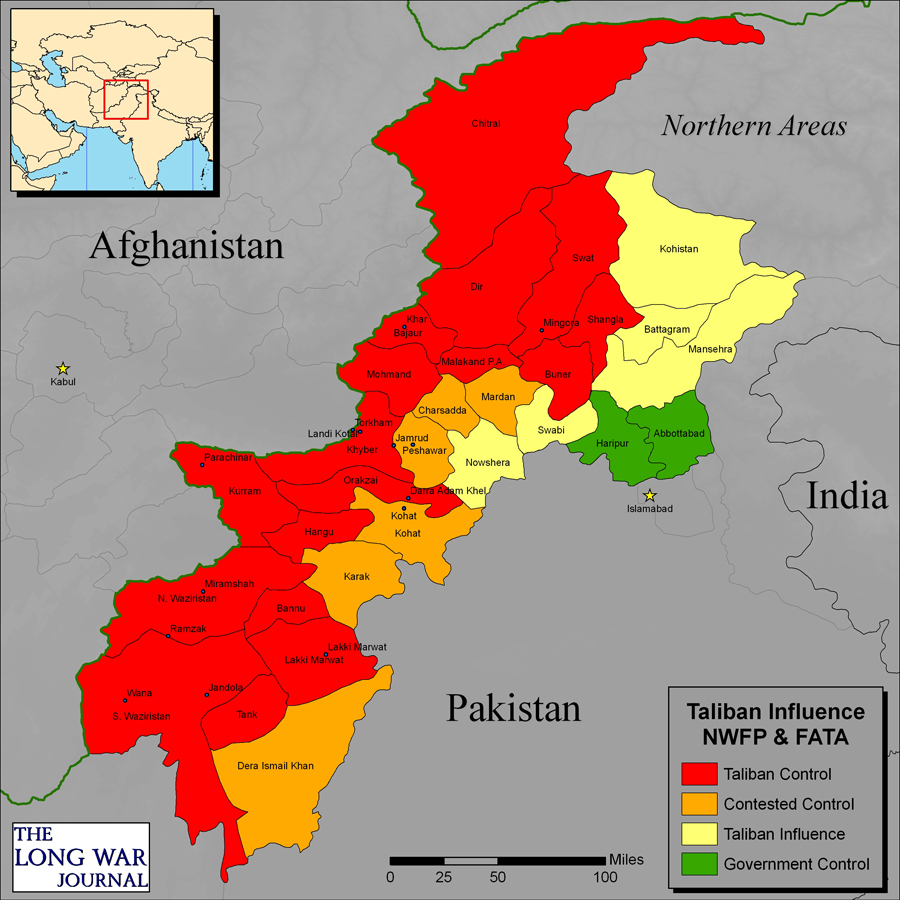 Military Organization of the Shadow Army

The Shadow Army is organized under a military structure, a US military intelligence officer familiar with the situation in northwestern Pakistan informed The Long War Journal. There are units analogous to battalion, brigade, and division formations found in Western armies. The military organization has a clear-cut command structure with established ranks. A senior al Qaeda military leader is placed in command of the Shadow Army, while experienced officers are put in command of the brigades and subordinate battalions and companies.

The re-formed Brigade 055 is but one of an estimated three to four brigades in the Shadow Army. Several other Arab brigades have been formed, some consisting of former members of Saddam Hussein's Republican Guards as well as Iraqis, Saudis, Yemenis, Egyptians, North Africans, and others. During the reign of the Taliban in Afghanistan prior to the US invasion in 2001, the 055 Brigade served as "the shock troops of the Taliban and functioned as an integral part of the latter's military apparatus," al Qaeda expert Rohan Gunaratna wrote in Inside al Qaeda. At its peak in 2001, the 055 Brigade had an estimated 2,000 soldiers and officers in the ranks. The brigade was comprised of Arabs, Central Asians, and South Asians, as well as Chechens, Bosnians, and Uighurs from Western China.

The 055 Brigade has "completely reformed and is surpassing pre-2001 standards," an official said. The other brigades are also considered well trained. One official said the mixing of the various Taliban and al Qaeda units has made distinctions between the groups somewhat meaningless.

"The line between the Taliban and al Qaeda is increasingly blurred, especially from a command and control perspective," the official said. "Are Faqir Mohammed, Baitullah Mehsud, Hakeemullah Mehsud, Ilyas Kashmiri, Siraj Haqqani, and all the rest 'al Qaeda'?" the official asked, listing senior Taliban commanders in Pakistan that operate closely with al Qaeda. "Probably not in the sense that they maintain their own independent organizations, but the alliance is essentially indistinguishable at this point except at a very abstract level."

The Taliban have begun an ideological conversion to Wahhabism, the radical form of Sunni Islam practiced by al Qaeda. "The radicalization of the Taliban and their conversion away from Deobandism to Wahhabism under Sheikh Issa al Masri and other al Qaeda leaders is a clear sign of the al Qaeda's preeminence," the official noted. Sheikh Issa is the spiritual adviser for Egyptian Islamic Jihad, Ayman al Zawahiri's organization that merged into al Qaeda, and the leader of al Jihad fi Waziristan, an al Qaeda branch in North Waziristan.

The establishment of the joint Taliban and al Qaeda military formations under the overall command of the Shadow Army has been facilitated by the proliferation of terror training camps in the tribal areas and the Northwest Frontier Province. In the summer of 2008, senior US intelligence officials told The Long War Journal that more than 150 camps and more than 400 support locations were in operation in Northwestern Pakistan. Most of the camps are considered "transient" in nature, an official said. Trainers and recruits may gather in villages and meet to conduct training in the vast mountains and valleys in Pakistan's northwest. As of last summer, an estimated 25 to 40 of the camps were considered permanent.

These camps have various functions, and not all of them are used to train the Shadow Army. Some of the camps are used to indoctrinate and train suicide bombers for attacks in Pakistan, Afghanistan, India, and the West. Some of the camps are devoted to training the various Kashmiri terror groups who have flocked to the tribal areas and are also integrating with the terror alliance. One of these camps serves as a training ground for the Black Guard, the elite bodyguard for Osama bin Laden, Ayman al Zawahiri, and other senior al Qaeda leaders.

We'll see how organized they stay if the promised ramp-up of US trigger-pullers, Predators and Reapers takes place.
0

Scary amount of RED there! I hope the promise is kept to focus on this region and send the appropriate amount of troops, support and prayers!!!

Plus removing the handcuffs (Rules of Engagement)!

The more organised they get the easier it'll be to either destroy them or moderate them.

Good stuff, thanks for posting.