SPECIALLY trained members of the Defence Forces' elite corps, the Army Ranger Wing, will be the first Irish peacekeeping troops on the ground in Chad.
The Rangers will be deployed in Chad next month to provide protection for army engineers tasked with building a headquarters for the Irish deployment as part of the peace mission in Chad and the Central African Republic.
It is expected that up to 350 Irish soldiers will be sent to the region.
A reconnaissance team, including Irish personnel, is being sent to Chad today. It will determine what role the Irish contingent should play in the mission and will report back to the chief of staff of the Defence Forces, Lieut Gen Dermot Earley, who will then make recommendations to Defence Minister Willie O'Dea.
Lieut Gen Earley said yesterday that it was likely the Irish would play a significant part in the mission and uppermost in his mind was the safety of any troops that might be deployed there in the coming weeks and months.

So they finally made it public.. Selection was meant to start tomorrow.it was posponed until further notice..

Some new pics of the ARW training for said role....
Images of members of the Army Ranger Wing in training for potential deployment overseas >>http://www.military.ie/army/ranger/index.htm#
B

Donegal deployment to Chad delayed until early 2008
Nov 29, 2:25 am
The deployment of an EU peace-keeping force to war-torn Eastern Chad, which would include a number of Donegal soldiers looks set to be delayed until March.

While a group of 50 members of the elite Army Ranger Wing will travel to the region next month, the remaining troop contingent, which will draw from the defence forces Western Brigade and army bases at Finner, Rockhill and Lifford, will not be sent out to early 2008.

The delay stems from a shortage of helicopters.

Some Christmas for them! 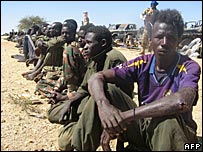 These rebels were captured after Monday's battle

Rebels in Chad have warned the nascent European Union peacekeeping force they will fight it as a "foreign occupation army" if it sides with President Deby. The warning from the rebel Assembly of Forces for Change (RFC) follows a major battle with a different rebel group which shattered a month-long ceasefire.
The clashes were near the area where 4,000 EU peacekeepers are to be sent - the border with Sudan's Darfur region.
The government says the attackers were chased to the border and wiped out.
The BBC's Stephanie Hancock says latest reports from the area say there has been renewed heavy fighting in the past few hours.
UFDD spokesman Mahamat Hassane Boulmaye told our correspondent that fighting had resumed.
Chadian army sources, who asked not to be named, also confirmed renewed clashes after an army column advanced from a garrison town near the border with Sudan, to attack a rebel stronghold.
Both the Union of Forces for Democracy and Development (UFDD) rebels and the government say that hundreds of fighters have been killed in this week's clashes.
Sudan accused
Chad's government said earlier it had tracked down and destroyed the remnants of the UFDD rebels but their leader Mahamat Nouri had crossed the border into Sudan on foot.


The government has always accused Sudan of arming the UFDD and is now calling on the government in Khartoum to find Mr Nouri and return him to Chad to face justice.
Sudan has previously denied having links to Chad's rebels.
"As far as Chad is concerned, the UFDD has been completely destroyed," government spokesman Hourmadji Moussa Doumgor said after clashes on Wednesday.
Fierce fighting broke out on Monday between the town of Abeche and the Sudan border.
Both the RFC and UFDD were among the four rebel groups who signed up to a Libya-brokered peace deal just last month.
EU force delays
The proposed EU force has been hit by delays and fears that its French contingent may not be seen as neutral, given France's support for Chadian President Idriss Deby. 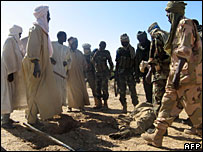 "The strong involvement of the French is naturally being seen with some scepticism here and there," Austrian Defence Minister Norbert Darabos said.
Austria is one of the EU contributor nations to the force, which was initially scheduled for deployment this month.
The delay is reportedly because contributor nations have yet to commit to supplying the required numbers of troops and logistical resources such as aircraft and medical support.
On Wednesday, Ireland became the latest country to approve its contribution of 400 troops as well as the force leader, Lt Gen Patrick Nash, but the Irish are not expected to arrive in Chad before January or February next year.

I don't think these Rebels realize that they won't be dealing with the "high quality" troops that they are used to confronting. ;) For some reason I don't see any EU force retreating when there's still ammo to fire off.

The deployment of Irish peacekeepers to the central African country of Chad has been postponed until the New Year due to the lack of adequate air support.

It means that the arrival of the main body of 400 Irish troops will be delayed by about two months.

Earlier this year, the EU agreed to send about 4,000 peacekeepers to Chad to protect refugees from neighbouring Darfur and aid workers.
Advertisement

Most of the troops earmarked for the mission are from France.

Members of the elite Army Ranger wing and engineers were due to travel to Chad to prepare a camp for the main group of Irish troops.

But the planned deployment has been dogged by problems. EU countries have not supplied enough planes, helicopters and medical backup. Chad is a poor, landlocked country with huge logistical challenges in moving equipment, personnel, food and water.

The security situation has also worsened in recent days with Government troops in Chad killing hundreds of rebels around 65km from where the Irish are due to be stationed.

This morning, the anti-government Union of Forces for Democracy and Development declared what they said was a 'state of war' against French military forces, and any other foreign soldiers who might be deployed there.

In the past few days, Fine Gael warned that the peacekeeping mission was fraught with danger. But the Minister for Defence and the Chief of Staff insisted the Defence Forces were taking no unnecessary risks in sending troops to Chad.

The rangers will not now be sent to Chad until January at the earliest, and the main group of 400 troops will not go until late February or March.

This afternoon the Defence Forces said the delay in sending troops was not unexpected, due to the shortage of what they called 'key enablers' like air support.

A spokesman said any delay is completely unrelated to action by rebel forces in Chad.

First into Chad will be a 50-strong unit of elite Army Rangers who will need four flights to carry their equipment, including 12 heavily armed 4x4 Special Reconnaissance Vehicles, at a cost of nearly €4m.
Click to expand...

that is pretty neat. I didn't know they had Roger's Standing Orders as well.

Boondocksaint375 said:
that is pretty neat. I didn't know they had Roger's Standing Orders as well.
Click to expand...

The commander of the Army's elite Ranger wing has arrived in Chad in advance of the Monday's expected go-ahead for the EU mission there.

The leader of the Rangers arrived in the capital N'Djamena this morning and is accompanied by a Defence Forces engineer and two ordnance NCOs. They are making initial preparations for the arrival there next weekend of 50 specialist Irish troops.

Next Monday in Brussels the mission commander, Irish General Pat Nash, is expected to outline his plans to the General & External Relations Council of the EU.

Formal approval for the mission is expected at the meeting.

The planned mission has been plagued by delays.

When their camp near the Sudanese border is ready in mid-March, the main body of 350 Irish soldiers will join the 3,700-strong mission.

The peacekeeping force is being sent to Chad to protect refugees who have fled the turmoil in neighbouring Darfur.
Click to expand...

It seems the Finns are sending troops to Irish Battalion. 60 men (well its something, I guess) will be attached in late Feb. I post a link, but I guess its not worth much, as it is in finnish.

I just text One of the ARW Sgts heading out to wish him well. (lucky bastard)


There are already eight Irish military personnel in Chad. Three are there as part of EUFOR Chad/CAR Force HQ and five are an advance party of the Army Ranger Wing.
At present there is no threat to their security and they are in regular contact. They are keeping Defence Forces HQ and the mission's Operational HQ in Paris updated.

The situation will continue to be monitored closely.
'Obviously we will take whatever action necessary to ensure safety of our personnel,' a spokesperson for the Defense Forces said.
'The current tensions are a matter for the Chadian authorities. It does not fall within the remit of the UN-mandated mission, which is focused on the protection of refugees and internally displaced persons in eastern Chad.'

About 50 members of the elite Army Ranger wing were due to fly to Central Africa tonight in the build-up to the start of the EU peace enforcement mission in Chad.


The rangers, along with army engineers, will be based in Abeche, the headquarters of the EU force.
Their job will be to set up camp and help create a safe working zone for the main body of 350 Irish troops who will be deployed to Chad in mid-March.
This large group of Irish soldiers will be based in Goz Beida and their mission is to protect both refugees from neighbouring Darfur and camp workers.
Last night, the transportation of army equipment began at Dublin airport.
The first of four huge Russian Antinov cargo flights was loaded with 300 tonnes of gear for the rangers. Included are 18 military vehicles, weapons, ammunition, water and medical supplies.
Click to expand...

Hope they stay safe
B


(DUBLIN) - Irish forces will begin to deploy to Chad next week as part of an Irish-led 14-nation mission to protect refugees who have fled Sudan's stricken Darfur region, officials said Wednesday.
Fifty members of the elite the Army Ranger Wing will be the first Irish unit into African country from February 21, said the Irish Defence Forces, after the Eufor mission resumed deployment during the day.
"Following their arrival into Ndjamena the Rangers will undertake the 900 km overland journey east across Chad's arid interior to Abeche and Goz Beida," it said in a statement.
"They will immediately set about patrolling the region, identifying suitable base camp areas and assessing the prevailing security situation in advance of the arrival of the main body of Irish troops," it added.
The main 400-strong Irish unit will begin to deploy in mid-March, said a ministry spokeswoman.
"The focus of the mission remains the creation of a safe and secure environment in Chad thereby helping alleviating of the suffering of the 400,000 people presently occupying the refugee camps along the border with Darfur."
Deployment of the 3,700-strong EUFOR peacekeeping mission to Chad and the Central African Republic was suspended less than a week after it began in late January when rebels opposed to President Idriss Deby reached the capital.
EUFOR is commanded from France by Irish Major General Pat Nash and in Chad itself by French Brigadier General Jean-Philippe Ganascia, who has expressed hope of getting the force to operational capacity by the end of March.
B

Hey look, they just left and you can already buy the shirt

Boondocksaint375 said:
Hey look, they just left and you can already buy the shirt

Who actually buys those t-shirts?Look at the other Irish Army t-shirts,they all have para insignia..even when they are infantry!