BFT on your iPhone?!?

What if the iPhone could be used in war? True, it’s primarily a consumer product, but it’s versatile and always connected to the internet (assuming you have network reception) — so why not?

That’s the idea behind new iPhone apps being showcased by Raytheon, a military contractor, at the Intelligence Warfighting Summit in Tucson. One app called the One Force Tracker will provide live data tracking the location of friends and foes on real-time maps. The app will also be used to communicate with other units.

The image above depicts multiple personnel of a military force or first-response team on a map displayed in One Force Tracker.

Raytheon is also developing an air-traffic simulator similar to the popular iPhone game Flight Control. Raytheon’s app aims to enable air-traffic controllers to repetitively practice (in multilevel, gamelike fashion) aspects of their training regimen anytime, anywhere. The image below shows a simulation mode of the app, which is designed to allow controllers to practice “vectoring” multiple aircraft. The goal is to maintain safe air speed and distance between units, among other factors. (We’d imagine Raytheon’s air-traffic simulator is much more difficult than Flight Control.)

Neat stuff. What’s funny is the military usually gets all the cool tech before consumers do, but this is a rare case of the opposite. Raytheon isn’t the first to try out military apps for the iPhone, either. Previously, Wired.com reported on BulletFlight, a $30 iPhone app for military snipers to calculate ballistics. The app was designed to complement a gun mount for the iPod Touch. 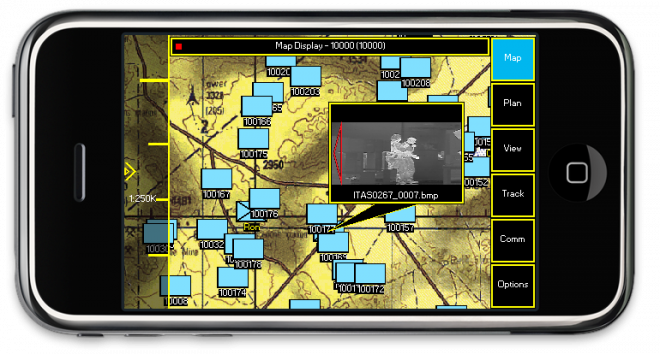 Hopefully they think about encrypting this prior to deploying it. :doh: