I'd be curious to hear what an independent psychiatric assessment would conclude. It's good to hear that he turned himself in with all the weapons. 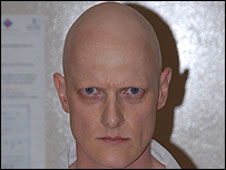 Bradley had become a recluse and heavy cannabis user

An ex-soldier who shot four members of his family with a silenced pistol has been given four life sentences.
The bodies of Peter and Josie Purcell, both 70, and sons Keith, 44, and Glen, 41, were found after David Bradley walked into a Newcastle police station.
He had killed his aunt, uncle and cousins after "flipping out" at their home in Benwell Grove in July 2006.
The 41-year-old admitted manslaughter with diminished responsibility and will serve a minimum term of 15 years.
Psychiatrists agreed that although Bradley was mentally ill, under the law he could not be sent to a psychiatric hospital indefinitely because his condition is not treatable.
Instead Justice Secretary Jack Straw ordered that Bradley be detained at Rampton secure hospital in Nottinghamshire for an undetermined period of treatment.
Passing sentence, Judge David Hodson, the Recorder of Newcastle, said it was for the parole board to decide if Bradley would ever be released.
He said: "The parole board would never contemplate releasing you unless it was completely and utterly satisfied you pose no risk whatsoever to other members of your family or the wider public. 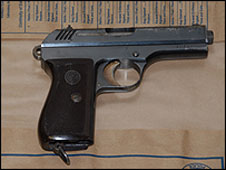 "From all I have read for this case I am of the opinion that your psychiatric disorder and mental illness are of such a degree it may never be safe for you to be returned to the community."
Bradley, who was a heavy cannabis user, lived as a virtual recluse in the bedroom of the house he shared with his four victims, Newcastle Crown Court heard.
On 8 July 2006, after complaining of feeling "hot and bothered", he began smashing up his room before fighting with his cousin Keith.
He retrieved the pistol - which he had smuggled into the UK from Bosnia while serving in the Army, shot Keith, and then killed his uncle who was asleep on the sofa.
His aunt and cousin Glen were shot at point-blank range when they returned home later that night.
Explosive device
Soon afterwards, the nearby West Road Police Station was evacuated when Bradley walked in to confess to the killings and placed a bagful of weapons on the counter.
Inside was a Thunderflash explosive device wrapped in nails, a 12-bore shotgun, two knives, and more than 400 rounds of ammunition.
In January this year, four murder charges against Bradley were dropped after two psychiatrists agreed he was mentally ill at the time of the killings.
Two medical experts, appearing for the prosecution and defence, also told the court the defendant's heavy cannabis habit may have contributed to the deterioration in his mental health.
Both experts agreed that he had not been suffering from Gulf War Syndrome.
Bradley had served as a Royal Artillery gunner in the first Gulf War, Bosnia and Northern Ireland.
Click to expand...