My gut feeling says something bad is going to happen with this. Cross border shoot out etc... 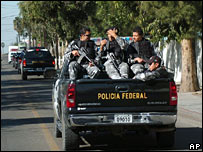 Tijuana has been badly affected by drug-linked violence

Mexico is sending more than 3,000 soldiers and police to the northern border city of Tijuana to help fight drug trafficking and gang violence.
The troops will hunt suspected traffickers, patrol the coast and man checkpoints, a senior official said.
The city, across the border from San Diego in California, is a major entry point for drugs into the US.
It has been hit by violence between rival drug gangs, with more than 300 killings in 2006.
The new president, Felipe Calderon, who was sworn in last month, has vowed to curb drug-related violence.
'Hostage to crime'
Interior Minister Francisco Ramirez Acuna said the Tijuana force would be backed by 28 boats, 21 planes and nine helicopters.
"We will carry out all the necessary actions to retake every region of national territory," he said. "We will not allow any state to be a hostage of drug traffickers or organised crime."

Hundreds of police arrived in the city on Tuesday, the Associated Press news agency reported, and more are expected in the coming days.
Last month Mr Calderon sent 7,000 troops to Michoacan state on the Pacific coast to curb the drug violence.
More than 500 people died in violence there in 2006.
In the worst incident, masked men burst into a bar in Uruapan and flung five human heads onto a crowded dance floor in an apparent warning to a rival drug gang.
Since the deployment in Michoacan the troops have arrested more than 50 people, some suspected members of rival gangs. In a New Year's message, Mr Calderon pledged to intensify the fight against crime and drug trafficking. "The operations will allow us to re-establish the minimal security conditions in different points of Mexico so we can recover little by little our streets, our parks and our schools," he said.

War with Mexico:uhh: It would be like shooting 'illegals in the Rio Grande'

Are they still sending unarmed NG to the Boarder??

DAMN...no more trips to Unicorn, Adiledes or Chicagos for awhile

And it's about the stoopidest thing ever, unarmed NG...especially with the above.

WTF??:doh: Ok..I think a forum field trip is in order. I wanna see you guys on Boondock Speilburg's next youtube!!
L

Chopstick said:
WTF??:doh: Ok..I think a forum field trip is in order. I wanna see you guys on Boondock Speilburg's next youtube!!
Click to expand...

situation: fucked up shit in tijuana

mission: reconnisance and interdiction of GDFW along the us/mexico border

Gypsy said:
And it's about the stoopidest thing ever, unarmed NG...especially with the above.
Click to expand...

Its been going on forever.

According to the Border Patrol, an unknown number of gunmen attacked the site in the state's West Desert Region around 11 p.m. The site is manned by National Guardsmen. Those guardsmen were forced to retreat.

The Border Patrol will not say whether shots were fired. However, no Guardsmen were injured in the incident.

The Border Patrol says the incident occurred somewhere along the 120 mile section of the border between Nogales and Lukeville. The area is known as a drug corridor. Last year, 124-thousand pounds of illegal drugs were confiscated in this area.

The Border patrol says the attackers quickly retreated back into Mexico.
D

The Cali guard is being forced border duty by Bush. The Terminator said no because of Iraq deployments. Bush said you will or no funding. Terminator gave in. They are there as OBSERVERS not as enforcers per the Pres. They have been unarmed before in most domestic deployments(Airport duty, border, Katrina). The guard like all military organizations are sometime used to satisfy political issues(no duh) but in this case strictly as observers nothing else. Watch and report. Those guys have a tough job. One day be real Army...next a security guard. Good job guys anyway.

3,000 soldiers and police to the northern border city of Tijuana to help fight drug trafficking
Click to expand...

Wonder how many of them will be aiding and abetting the drug trafficers... :uhh:

We were headed towards a possible war with Mexico in 1916 when World War I sidetracked us...

This really makes me angry, WTF is Bush thinking?

There are armed incurtions by a foreign govts military!!!

WTF is so hard to comprehend about that!!!???

Arm the fucking guard, arrest every caught crossing illegally, shoot anyone acting in and aggressive manner or carrying a firearm! 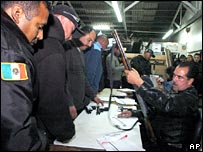 The guns will be inspected by federal officials

Local police in the northern Mexican border city of Tijuana have been ordered to hand in their guns.
The move is part of an operation by soldiers and federal police to crack down on drug traffickers.
The guns will be inspected by federal officials, who are investigating allegations that some local officers have been involved in drug smuggling.
Police are refusing to patrol unarmed, reports say. Gang violence left more than 300 dead in Tijuana last year.
Entry point
Earlier this week, the government announced it was sending more than 3,000 soldiers and police to the Tijuana to help fight drug trafficking and gang violence.
Interior Minister Francisco Ramirez Acuna said the Tijuana operation would be backed by 28 boats, 21 planes and nine helicopters.
The city, across the border from San Diego in California, is a major entry point for drugs into the US.
This is the second such federal operation ordered by President Felipe Calderon since he took office last month. In December, federal officials carried out a crackdown in the western state of Michoacan, which is also hard hit by drug-related violence. Drug gangs are blamed for more than 2,000 deaths in Mexico in 2006.

If not checked, aggressively, this could set a dangerous precedent. The morale of the Guardsmen on this mission must be in the toilet right now. If it isn't it will be.
L

This is really getting me PO'd.

This has been all over the local radio today. Janet is busy getting sworn in and does nothing. Why and how she was re-elected is beyond me. Demands the NG are sent to the border and then won't finance them.

Well, the Minutemen are heading down there now....

Minutemen heading to back up National Guard
http://www.azstarnet.com/sn/hourlyupdate/163418

"Volunteers with the Minuteman Civil Defense Corps are headed for the Arizona-Mexico border Friday to provide backup for National Guard troops in response to an incident near Sasabe in which the approach of armed men forced soldiers to retreat."

Tijuana must have SERIOUSLY gone downhill since my last visit in the early 90's. It was a must see place if you were stationed at Fort Irwin and being in the Army meant no curfew like the Navy/Marines had.

As for our men and women on the border not being able to defend either themselves OR our borders, that is fucked up. The fact they had to retreat from their position is appalling and just shows the rest of the world that we really are just there for show. What happens the next time when they bring a bigger group of bad guys and one or more of our people gets killed? This is just unacceptable.

Worse is that the minutemen are just as powerless! The last case I heard of with them where one of them opened fire cost those American Citizens their farm. That's right, they were sued by an illegal immigrant and lost their US Owned property. The border situation is only going to get worse if we do not arm our people and allow them to do their job, protect this country!

This May Be America’s Deadliest Serial Killer With 90 Victims