A TALIBAN death squad has raided one of Kabul's most secure Western-style hotels in a daring night-time attack that killed almost 20 people and raised deep concerns about further suicide bombings in the capital.

Ten people, including hotel guests and staff, were killed along with at least six Taliban terrorists, and two New Zealand SAS troopers were wounded in the six-hour stand-off. No Australians were caught up in the crisis but security for the dozens of Australian soldiers, police and officials working in Kabul was stepped up after the assault.

It was just after 9.30pm and the poolside wedding party at the state-owned Intercontinental Hotel was in full swing when all hell broke loose. A six-man Taliban suicide team breached the perimeter of one of Kabul's best defended hotel complexes and went hunting for victims - preferably the local officials or Westerners who frequent the faded 1960s complex on an arid hilltop west of the city centre.

Taliban spokesman Zabiullah Mujahid said the target had been a meeting of about 300 international and Afghan security specialists, however it is believed they struck too early as most were yet to arrive for the event.

One bomber blew himself up at the main checkpoint and in the confusion the others - some believed to be dressed in police uniform - ran into the hotel and started shooting.

Security forces had been expecting a major suicide bombing after detecting a 10-fold increase in the number of suicide vests seized this year.

As guests, including dozens of Afghan officials, barricaded themselves in their rooms the killers, armed with rocket-propelled grenades and automatic weapons, moved from floor to floor in the five-storey building, gunning down anyone in their path.

The night sky was pierced by tracer rounds and the evening calm was shattered by several explosions.

Almost an hour after the attack began an Afghan Police Crisis Response Unit and their heavily armed mentors from the New Zealand SAS arrived in armoured vehicles. As they pursued the killers through the hotel, two of the Kiwi troops were injured when two cornered Taliban fighters detonated their suicide vests.
For more follow the link.
http://www.dailytelegraph.com.au/ne...e-hotel-in-kabul/story-e6freuy9-1226084533785

Good job to the Squadron boys.

That little Taliban sponsored shindig might cause a few ripples.

Wonder if Karzai is going to chide the Taliban for killing civilians?

International officials confirmed Wednesday that a brazen attack by suicide bombers on a popular hotel in Afghanistan that left 19 dead was the work of the Haqqani network, a Pakistan-based insurgent group that are closely allied with the Taliban.​
"We have intelligence indicators linking this failed terrorist attack to the Haqqani network," international officials told Fox News.​
Click to expand...

SOWT said:
Wonder if Karzai is going to chide the Taliban for killing civilians?
Click to expand...

Don't be foolish young man! He is going to chide the SAS for provoking the attack...
B 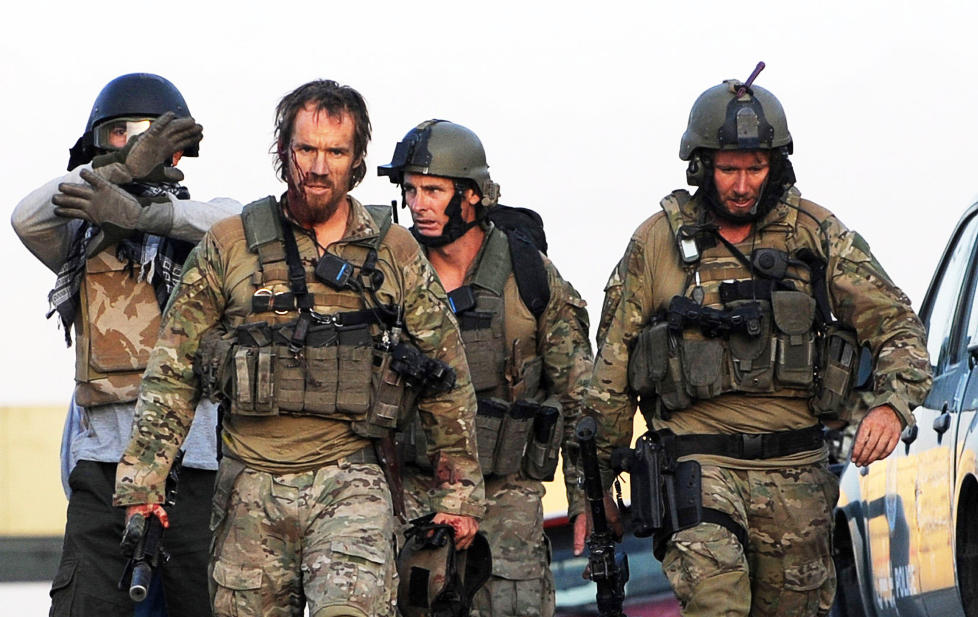 Its in the eyes.

I think that one trooper is going to kill and eat the photog.

Poor lads, this is going to cost them so much beer.
B

Its in the eyes.

I'll be the gear bitch, anyone know what vests they are wearing?

There's been some uproar over the photo here in the media, with some outlets pixalating the faces and others not. People have made the- fair- point that overseas outlets haven't bothered so there's not much point here. Others have said their safety is at risk- to which a lot of people have said that the Taliban wouldn't bother hunting them down in Auckland. Which is also a fair point but none of these take into account the potential effect on future ops and NZ foreign policy in general if these guys get captured later on down the line elsewhere.

Freefalling said:
I think that one trooper is going to kill and eat the photog.
Click to expand...

Wait, is that an ANP guy to the left? What's he doing there!?

He's a terp Spit. Hence wearing one of our old armour carriers and helmet.

Pardus, they're Platatac plate carriers that were made to spec for them.

Thanks for the heads up on the vest, I was wondering myself.
Maybe the guy on the left is camera shy.

Mac_NZ said:
He's a terp Spit. Hence wearing one of our old armour carriers and helmet.

Pardus, they're Platatac plate carriers that were made to spec for them.
Click to expand...

I was actually just being facetious about the Afghan's will to fight ;)
B

Granted there are a lot of lazy junk-ass afghans.... but usually the ones who get mixed up with the hard charging western soldiers are pretty hard charging ass stomping afghans as well...

Sure some are lazy but there are a few really checked out terps, and ANA commando's

In my opinion.. since Afghanistan started in 2001, and Iraq in 2003. This is the most incredible combat photo I have ever seen. Did the photographer win any awards?

The emotion and despair on their faces.. the blood on the face and hands of the shooter is just.. wordless.

So these guys are NZSAS? or SASR?