"Our greatest hopes for peace lie in being so strong and so well prepared that our enemies will not dare attack. Every citizen who cooperates in "Operation Skywatch" as well as in other defense activities, is helping prevent the war none of us wants to happen."
- President Harry S. Truman, July 12, 1952. 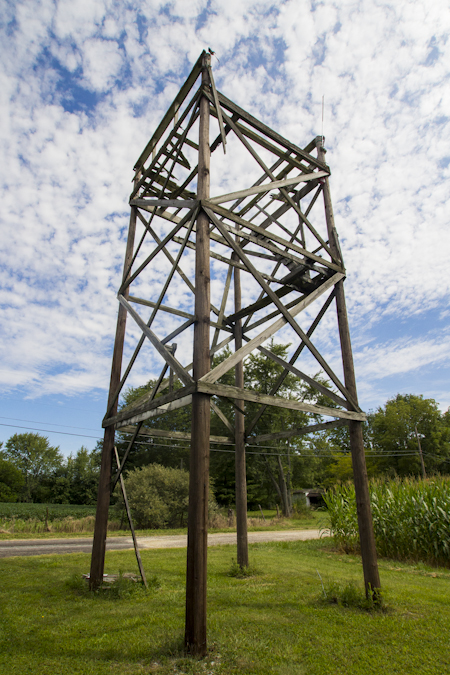 - The remains of an Operation Skywatch tower in Cairo, IN. This tower was one of many in a network dedicated to having civilian volunteers scan for enemy aircraft during the early years of the Cold War.

9/11 was the first time the United States had been attacked on its own soil since the Japanese campaigns on the Aleutian Islands and Pearl Harbor in World War Two. Military conflict followed - first in Afghanistan, then in Iraq and as of this writing - the US is weighing military intervention in Syria.

War and the potential for more shifted in the 21st century to the Middle East, while it had been focused mainly on Europe during the 20th century. With new conflict came new enemies and new ways of attempting to thwart them. On 9/11 we saw an unconventional enemy - one who was detected on radar, but used our own civilian aircraft against us. While our troops fight in the desert, we fight the enemy at home by submitting to "pat-downs" and removing our shoes at the airport. New agencies, tactics and weapons were created to try and flush out this new threat that may be among us. For better or worse, this is the way we currently defend the home front in the Global War on Terror. It's something we never faced before and the debate rages whether or not it's worth giving up freedoms or having our phones wiretapped to prevent another terrorist attack.

Before this, we looked for our enemies differently - the remnants of which can be found just off a dirt road by a corn field in Indiana. 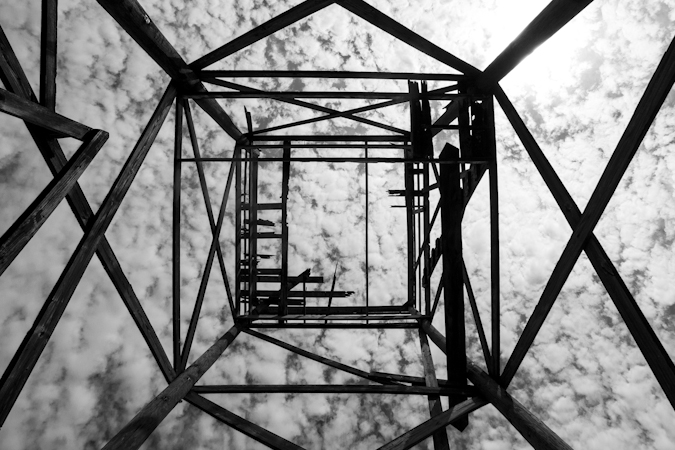 - What remains of the Cairo, IN Skywatch tower from below.

In the 1980's, American moviegoers watched as a fictitious invasion of our homeland by the Soviet Union played out on the cinema screen. Russian paratroopers landed in small towns while their tanks rolled across the great plains. Rag tag freedom fighters shouted "Wolverines" as they launched a guerrilla war against the communist invaders. Red Dawn's plot played upon a fear in the back of our minds: what would happen if and when the Soviets finally attack? It was an uneasy thought that shaped American policy and politics since the end of the Second World War. Right after American and Soviet troops shook hands in Berlin atop the rubble of the Third Reich, the stage for the Cold War was set. Russia countered the United States as the globe's two super powers. When a third world war finally came, would we be ready? 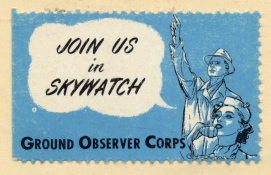 My friends and I were on our way from Cincinnati to Milwaukee. During the drive there, I was browsing a website on my phone dedicated to interesting roadside attractions and oddities. As we neared West Lafayette, Indiana, the website showed that a "Russian Bomber Memorial" was nearby.

Our GPS directed us off the highway, into the country and onto a dirt road where we came upon the memorial and the rotting wooden structure next to it. The memorial isn't a "Russian Bomber" memorial so much as it is a memorial to those who once looked for them. In the early 1950's, the United States government established the "Ground Observation Corps." The GOC was created to help the military track any enemy craft that may have penetrated American airspace in the absence of a nationwide radar system. By 1952, the program was rolled into "Operation Skywatch." 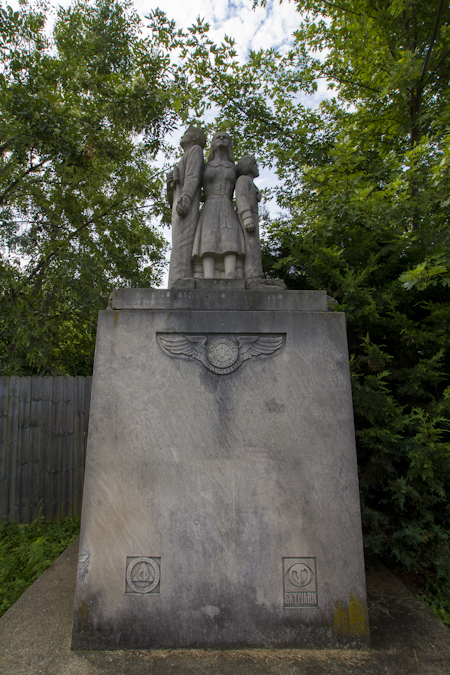 - The memorial statue at Cairo, IN.

The goal of Skywatch was simple: civilian volunteers would work in round-the-clock shifts to man outposts with a clear view of the sky. If they spotted suspicious aircraft activity, they were to immediately phone their designated Air Force command center. At its peak, the program had 16,000 posts scattered across the United States.

The tactical usefulness and defense capability of the Skywatch program is debatable. At the time of its implementation, US intelligence had vastly over estimated the amount of bombers Russia had in its arsenal. Even with its available aircraft, the US wasn't really a nearby target. Theoretically, Soviet bombers could reach the continental 48 states, but wouldn't have nearly enough fuel to return to the Motherland let alone penetrate the US as far as the Midwest. In the event of a third world war, Soviet bombers would've probably headed to Europe first. However, Skywatch most likely served as a home front morale booster. Through the program, ordinary citizens could feel that they were making a difference and helping to protect their nation from the "Red Menace."

According to Radomes.org, one government recruiting broadcast read:

"It may not be a very cheerful thought but the Reds right now have about a thousand bombers that are quite capable of destroying at least 89 American cities in one raid.... Won't you help protect your country, your town, your children? Call your local Civil Defense office and join the Ground Observer Corps today!"
The broadcast's message was a little less than honest about the actual threat posed by the Soviet Union. Nevertheless, American's did their part by joining in Skywatch to provide civil defense.

- Air Force officials inspect a Skywatch observation post in North Carolina in 1958. Image via: Air & Space Magazine
The program ended in 1959 when the United States finally had the ability to electronically survey all of its airspace. Skywatch's closure was just another example of the rapidly escalating military capabilities of the United States Armed Forces. No Skywatch observers ever saw the silver gleam of a Russian "Bear" bomber on the horizon, carrying its deadly nuclear payload to rain hell on the heartland. Ballistic Missiles replaced bombers as the preferred method for warhead delivery just as radar replaced Skywatch. The plot of "Red Dawn" never became reality. Berlin's wall fell and the Cold War ended. Today, the world and its conflicts are a much different place. 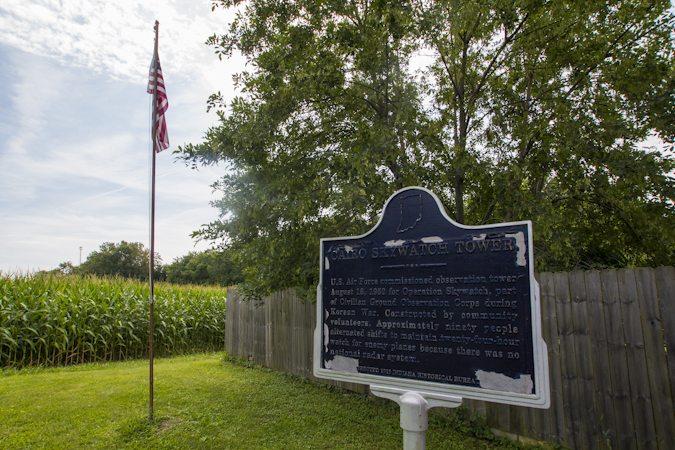 - Cairo Skywatch Tower plaque and
In a secluded corner of Indiana a stone monument stands next a faded marker, a rusted flag pole supporting an American flag and the rotting wooden watch tower. Three figures stand atop the memorial dedicated to the Ground Observer Corps of Operation Skywatch: a child with his mother's arm draped over him as she clasps the hand of her husband who bears a set of binoculars, all with their eyes pointed towards the sky. The monument is a reminder of how we once fought our enemies at home. It's a reminder to a war, a time and a political landscape that has faded into history with lessons we should never forget. No matter the severity of the threat, even if over-exaggerated, ordinary citizens did their part. They gave up their time to man the watch towers. In the modern day, how much will we give up to fight the enemy from our home fronts? When and if the Global War on Terror draws to a close, will we erect a monument bearing a TSA worker and a full body scanner beneath the shadow of a surveillance drone? 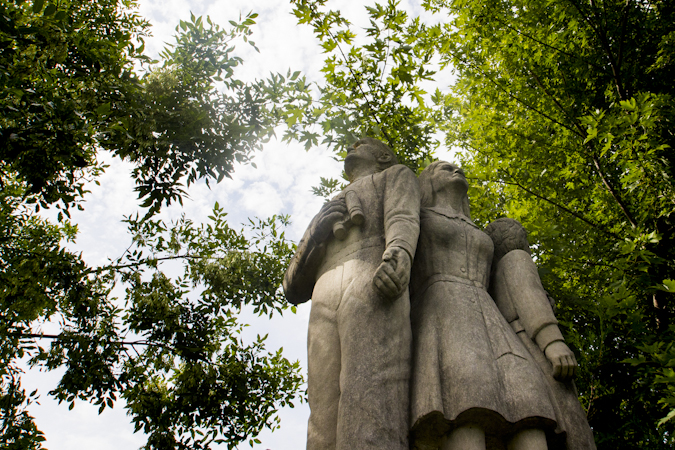 I thought this to be pretty interesting and something that I had never heard of before that is near the college I graduated from. While not directly military related, I thought this to be a neat bit of a history that colludes with the military side given that Grissam AFB is not too far away (another neat fact is this is where Ted Williams was trained as a Marine pilot) and during the cold war was home to the 323rd Fighter Wing (F86 Sabre's and F-100 Super Sabre's) and fell under the Eighth Air Force (B-52's). And people only say corn is grown in Indiana.

There was an Army NG Nike Missile base right next to my high school. (Project Nike was all over the country.) These were AA missiles designed to destroy incoming Russian bombers. When I was a kid I grew up in the NYC suburbs. In my bed at night I'd hear planes overhead and think what if, what if those planes are on their way to drop an atomic bomb on New York? Sounds silly now...but it scared the piss outta me. My mom was storing canned goods and drinking water in our basement in case of nuclear attack. The fear was real. We used to do air raid drills at school where we'd get under our desks!!!! Like the desk was gonna save us from a nuke...But that shows you how serious the threat was taken.

(And off topic, I met Ted Williams a couple of years before he died in a Florida supermarket deli of all places...)

I grew up playing paintball in an old abandoned Nike Solo base.


Ocoka One said:
There was an Army NG Nike Missile base right next to my high school. (Project Nike was all over the country.) These were AA missiles designed to destroy incoming Russian bombers. When I was a kid I grew up in the NYC suburbs. In my bed at night I'd hear planes overhead and think what if, what if those planes are on their way to drop an atomic bomb on New York? Sounds silly now...but it scared the piss outta me. My mom was storing canned goods and drinking water in our basement in case of nuclear attack. The fear was real. We used to do air raid drills at school where we'd get under our desks!!!! Like the desk was gonna save us from a nuke...But that shows you how serious the threat was taken.