The late, great gun guru Jeff Cooper popularized the Robert Heinlein quote “An armed society is a polite society.” Polite Society a few years ago became the name of a group dedicated to responsible, professional training with defensive firearms. Led by Tom Givens, who runs the excellent Rangemaster facility in Memphis, the Polite Society hosts an annual Tactical Conference. It was held this year at the outstanding United States Shooting Academy (USSA) adjacent to the Tulsa Police Academy in Tulsa, Oklahoma.

About a hundred twenty-five men and women from all over the country attended, most also shooting the challenging Polite Society defensive handgun match. Training included live fire on the splendid range complex, under the masterful tutelage of instructors such as Will Andrews, Mike Brown, Steve Moses, T.J. Pilling, Rob Pincus, and the undercover cop known as “Southnarc.” Karl Rehn led a bloc of live-action force-on-force training.

In the classrooms, Paul Gomez addressed immediate treatment (including self-treatment) of gunshot injury. Psychologists William Aprill and Glenn Meyer gave insights from their profession as related to the world of the gun and threat management, while Skip Gochenour gave additional insights into criminal behavior. Marty Hayes delivered a powerful bloc on reducing firearms instructors’ liability; Hany Mahmoud did a superb job of clarifying the tangled world of Middle Eastern terrorist dogma; John Farnam taught an overview of the urban rifle concept; John Hearne delivered an in-depth analysis of a classic gunfight and its lessons for both armed citizens and law enforcement personnel; and this writer addressed management of wrongful accusations in court after justified use of deadly force.

Tom Givens’ Rangemaster crew did an awesome job managing the diverse Polite Society match. A live-fire shoot-house with realistic 3-D manikins was set up to duplicate a Mumbai hotel, and each practitioner had to shoot his way to the exit past “terrorist” targets sprinkled among many “innocents.” On the square range we met a fifty-round skill test of high-speed shooting free-style and with either hand only, from three to twenty yards, then a speed run on Pepper Popper falling plates, and finally a rescue scenario, all live fire.

Congratulations to the winners. Hany Mahmoud captured the backup gun match…Gail Pepin won High Lady…and 63-year-old Myrin Young used his STI Trojan .45 auto to earn the overall Polite Society Championship. If old age and treachery really do beat youth and skill, then Myrin’s combination of old age and skill may be indomitable.
I enjoyed my first Polite Society/Tactical Conference event and hope to return next year. Police instructors and SWAT operators trained and competed alongside their natural allies, the responsible armed citizens, and you can join them next year. Information can be found at the websites for Rangemaster and USSA . I hope to return to USSA this fall to compete in the National Championships of the International Defensive Pistol Association.
With dummy “baby” secured behind wheel, Mas engages targets on right out of view as Polite Society range officer holds electronic timer. Pistol is Glock 9mm with white light unit attached. 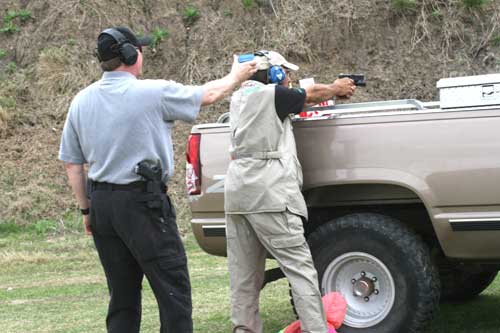 Gail Pepin fires a 9mm Glock from kneeling position during Standards phase of the event. She won the high lady award. 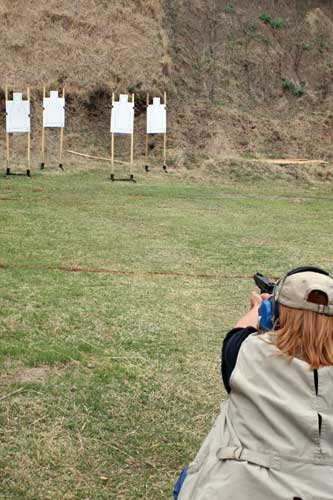 Among the Cops and their Instructors

Posted: 24 Apr 2009 07:03 AM PDT
I’m writing this in Wheeling, Illinois, two-thirds of the way through the six-day annual conference of ILEETA, the International Law Enforcement Educators and Trainers Association. Despite the brutal hits police budgets have taken in the current economy (see my earlier blog entry on this topic), we have some 800 police instructors from California to Maine, from Washington state to Florida, and Hawaii and Alaska, and several foreign countries in attendance. I talked with several who, faced with their department’s inability to send them, paid out of their own pockets to come. It’s that important to them. They understand what it means when your department names you the one who will train your officers to survive, who will train them for the moments when they risk their lives for the citizens they have sworn an oath to protect.

People write to forums and blogs (sometimes this one, in fact) to call cops jack-booted thugs and insist that they all want to disarm law-abiding citizens. I wish some of those folks could have been here. They wouldn’t have found a JBT in sight. Only hundreds and hundreds of men and women who have sworn that oath to risk their lives for the public safety, and who take with the deepest seriousness their assignment to train others to do likewise.

I’ve heard of one police chiefs’ seminar where the gun-banning Brady organization was welcomed for a demonstration booth, but the National Rifle Association was denied one. That may happen with some politically driven police chiefs, who serve at the whim of the city fathers who appoint them, and feel a need to hew to their benefactors’ political line and dance on the end of their puppet strings. It does not happen in THIS venue, founded and directed by famed supercop Ed Nowicki. Ed was in six gunfights in the course of a career that began as a Chicago copper, and eventually took him solely into training the next generations, at various times serving as a chief of police and even as a judge. At ILEETA, the Brady types were noticeably absent, but the packed vendor hall included booths for the NRA and also for USPSA, the United States Practical Shooting Association.

Thursday afternoon, I chaired the panel of experts discussion on deadly force issues. I had been able to assemble ten superstars of police training. Dr. Alexis Artwohl, former police psychologist for Portland, Oregon and one of our leading experts on the psychological and emotional dynamics of facing violent criminals in mortal combat. Attorney and police chief Jeff Chudwin, who had the day before received the coveted Police Trainer of the Year award. Attorney Adam Kasanof, a retired NYPD lieutenant whose career included a fatal gunfight. John and Vicki Farnam, top private sector instructors in armed survival. Brian McKenna, a retired Missouri cop who has spent most of his career analyzing police shootouts. Greg Morrison, Ph.D, currently a college professor and formerly senior instructor at Jeff Cooper’s famous school, Gunsite. DEA instructor Chuck Soltys, who on the first day of the conference had won the coveted ILEETA Cup in a high-speed shooting match. Vince O’Neill, of the Oklahoma state law enforcement academy. Dr. James Williams, police surgeon and leading authority on “tactical anatomy” and treatment of gunshot injury.

One of the topics that inevitably cropped up was response to mass murders in schools and other public places. Among us was Ron Borsch, instructor at the Southeast Area Law Enforcement Academy in Ohio, who has been an advocate of “sole response” entry into such situations by the first responding officer. Though controversial in law enforcement, his theory was validated recently by the courageous 25-year-old cop who entered a mass murder scene only a few weeks ago at an old folks home, and stopped the killing with a single bullet from his Glock .40 service pistol coolly and expertly delivered to the gunman’s chest.
Borsch’s impromptu discussion revealed the fact that some 25% of mass murder shooting sprees he has researched were ended by armed private citizens. This led in turn to a discussion of the Israeli Model, in place since the Maalot massacre of schoolchildren decades ago, in which teachers and other school personnel were trained and discreetly armed with handguns, which has proven famously successful ever since in Israel. Across the ten-member panel AND the dozens of police instructors attending the discussion, not a single voice was raised against that concept, and many spoke enthusiastically in favor of it.
Don’t listen to the politically motivated figureheads. Talk to the REAL cops. They’re the ones who best understand the dynamics of violence, and of protection of the innocent from evil.

As always, this week at ILEETA has recharged my batteries, reminding me of the pride I take in the badge I’ve worn for 35 years…and reminding me, also, that these law enforcement veterans overwhelmingly respect the responsibly armed American citizen.

Location
Here and There

Notice in both Massad's articles, is confirmation of many law enforcement veterans overwhelmingly respecting the rights of the responsibly armed American citizen.
:cool:
4