By David Mays - A Navy SEAL recruiter went the extra mile - or extra 135 miles, to be exact - to reach athletes who may have the fitness and drive to make it through the notoriously difficult SEAL training course.

Navy Petty Officer 1st Class David Goggins, assigned to the Naval Special Warfare Recruiting Directorate in Coronado, Calif., competed in and finished third place in the Badwater Ultramarathon by running 135 miles across Death Valley and up the side of Mount Whitney in California last week.

Goggins was on orders from his directorate to compete in Badwater. He and fellow recruiters are sent to "extreme" events across the country in an effort to reach out to athletes who may be good candidates for SEAL training.

Because the Navy refuses to lower its standards for passing SEAL training, it must attract already highly trained candidates. The Navy aims to graduate 500 SEALs during the next three years, said Lt. David Hecht, a spokesman for the directorate.

Fallen comrades were especially on Goggins' mind as he prepared to conquer Badwater. His participation in the event this year and last helped raise money for the Special Operations Warrior Foundation, which provides college scholarship grants, based on need, along with financial aid and educational counseling to the children of Special Operations personnel who are killed in an operational mission or training accident.

The Navy SEAL, who is also a former Army Ranger, took 25 hours and 49 minutes to complete what is considered the most grueling event of its type in the world. The course begins at 282 feet below sea level, the lowest point in the Western Hemisphere in California's remote southwestern interior near the Nevada border and ends 8,360 feet above sea level on the base of the continental United States' tallest mountain.

"In all these races you stay up a long time," Goggins said. "And to train to be a SEAL you're up for hours and days, so that helps out quite a bit knowing that you can go the distance."

Badwater participants frequently face temperatures approaching 130 degrees Fahrenheit. During the blazing daylight portion of their journeys, participants run on the white lane markers painted onto the right of the road as opposed to the asphalt itself. That way the soles of their shoes are less likely to literally melt from the heat.

Race directors intentionally hold Badwater in the middle of July so that runners will experience the very hottest weather Death Valley has to offer. Unlike most marathons and shorter organized races, Badwater offers no official aid stations. Instead, runners must bring their own support crew, all their own food and any other supplies they may need to survive the trek across Death Valley and up Mount Whitney.

Participants become so spread out over the course of the race that many complete most of the 135-mile event completely alone. Many participants stop to catch a few hours sleep along the way, and some have actually fallen asleep while running the race.

Goggins attributes his extraordinary performance on his crew, who would drive alongside in a support vehicle. "They worked their butt off for me out there, and it showed by the time I had, he said. "I mean you saw them out there on that mountain, they were coming off the car and sponging me down."

It was a specially designed sock, with individual compartments for each toe, that saved Goggins the agony of last year's race, when his feet became so mangled from 30 hours of pounding pavement that they were photographed and posted on Badwater's Web site, a sort of twisted badge of honor appreciated by the event's close-knit community.

"Last year I wore some thin socks, and it was just killing me," Goggins said. "This year the pain is not too bad, just on the front of my feet from going downhill."

This year's event featured unexpectedly cooler weather, with daytime highs only in the 112- to 117-degree range. Because of this, predictions of a possible new course record abounded before the start.

While many participants thought of the 24-hour mark as a mythical time that could never be bested, first-time Badwater participant Valmir Nunes, a 43-year-old from of Brazil, smashed the previous record by nearly two hours, finishing in 22 hours and 51 minutes. Nunes spent more than a week living in the Death Valley town of Stovepipe Wells to train on the course and acclimatize to the brutal conditions.

Goggins had no such luxury. He lives in Chula Vista, Calif., where daytime high temperatures hover in the comfortable 70s year round. That's perfect for recreational running, but not for Badwater preparation.

Goggins dressed in heavy layers of clothing to simulate the heat he would face in the desert and ran for hours at a time. He even turned the heater full blast in his car to experience sweltering conditions when he drove.

Only 90 athletes are allowed to compete in Badwater each year, although hundreds apply. The bare minimum requirement to even be considered for entry into the event is to have officially finished a running race of at least 100 continuous miles in length. Goggins surprised everybody when he placed fifth last year in his first Badwater attempt. He finished nearly four hours faster this year.

"I've run a few more hundred-mile races this year," he said. "It gets your legs used to the distance."

This story is useless without a picture! ;)

Great, now you made everyone unsubcribe from this thread.
L

Boondocksaint375 said:
Great, now you made everyone unsubcribe from this thread.
Click to expand...

I'm all about long distance races and all, but 135 miles of running; no thank you. I think boredom would drive me insane.
L

This race took place just down the road from me. It's hotter than fuck around here this time of year.

I don't ever want to hear an Army recruiter bitch about having to organize a DEP function again.

Goggins was on orders from his directorate to compete in Badwater. He and fellow recruiters are sent to "extreme" events across the country in an effort to reach out to athletes who may be good candidates for SEAL training.
Click to expand...

Guys like this are truly inspiring and make one's own probs seem minimal - thanks for posting this :)

Hoo-Yah ! Great job, what a way to represent the SOF community ! 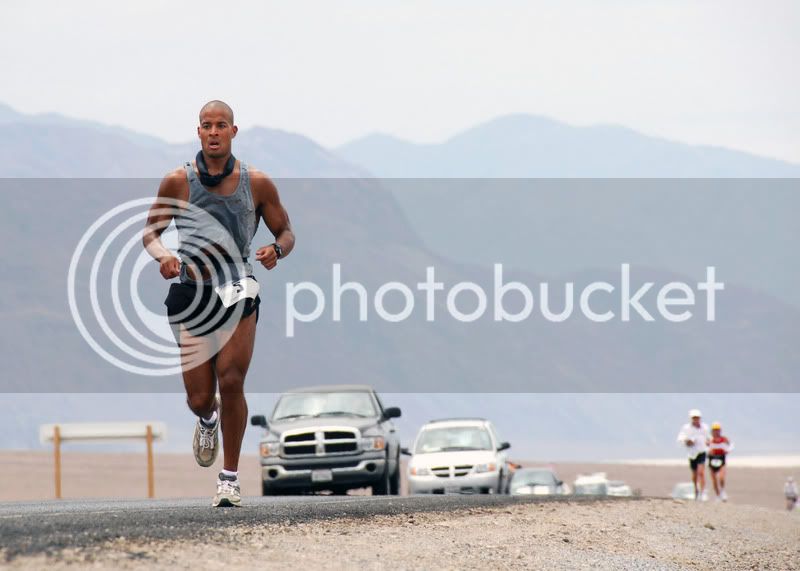 The start line is at Badwater, Death Valley, which marks the lowest elevation in the Western Hemisphere at 280’ (85m) below sea level. The race finishes at the Mt. Whitney Portals at 8360' (2533m). The Badwater course covers three mountain ranges for a total of 13,000’ (3962m) of cumulative vertical ascent and 4,700’ (1433m) of cumulative descent. The Portals are the trailhead to the Mt. Whitney summit, the highest point in the contiguous United States.
Click to expand...

I think this is a great recruiting tool for the SEAL teams and other HSLD units.

Queen Beach said:
Not Everyone! :cool:
Click to expand...

And on a serious note, he rocks for doing something like this. Hooya!

This just reminds me I'm a fatass, with my puny 5 milers.

Can elite athletes like this even WARM UP with a 5 miler?

How did I miss this thread in the first place?


LOL JoeBlackSpade... I have to agree, my little runs are ... not even a warm up for him.
B

hell, all of combined arent lol. What does someone think about for that long? I would be thinking "fuck this!"

I love running my knees can't handle it anymore though. Was drunck and pissed off one night years ago. Put my running shoes on and started running about 13 miles later I was in downtown Cincinnati LOL turned around and came back

Boondocksaint375 said:
hell, all of combined arent lol. What does someone think about for that long? I would be thinking "fuck this!"
Click to expand...

I liked marathons, but those, you're running in a large group of people and there's usually something to look at or someone to chat with to get your mind away from boredom or physical discomfort.

I would be thinking "fuck this!"
Click to expand...