It has a little over 2500rds through it since I bought it in January. Majority of it being WinWB and Atlantic Arms Ammo with 115gr bullets, several hundred Fed+P+ 115gr. No malfunctions, has not been cleaned yet. 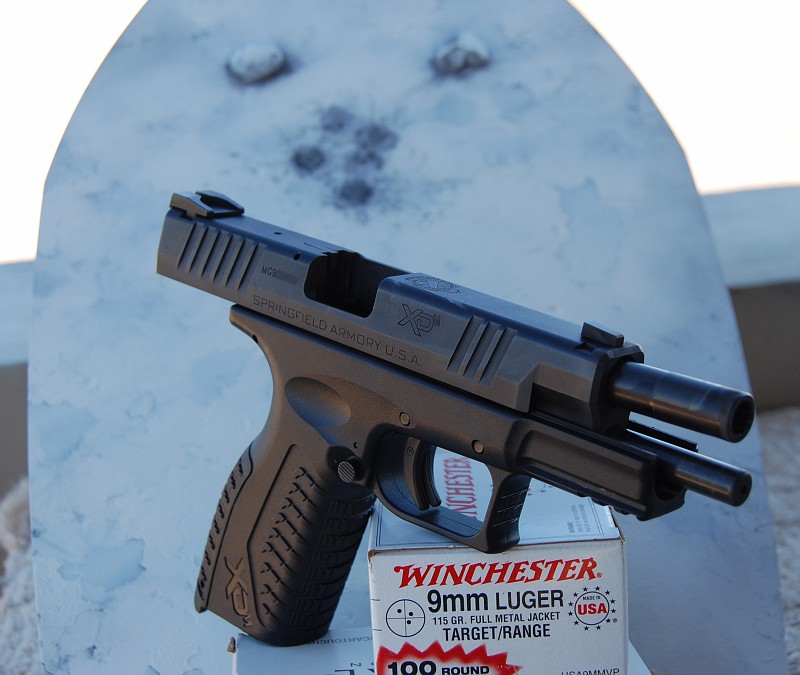 I have a nasty flinchbuckjerk that tends to push the shots left. This was typical at 25yds, 10rds. Red sq. is 5 shots from my 1911. 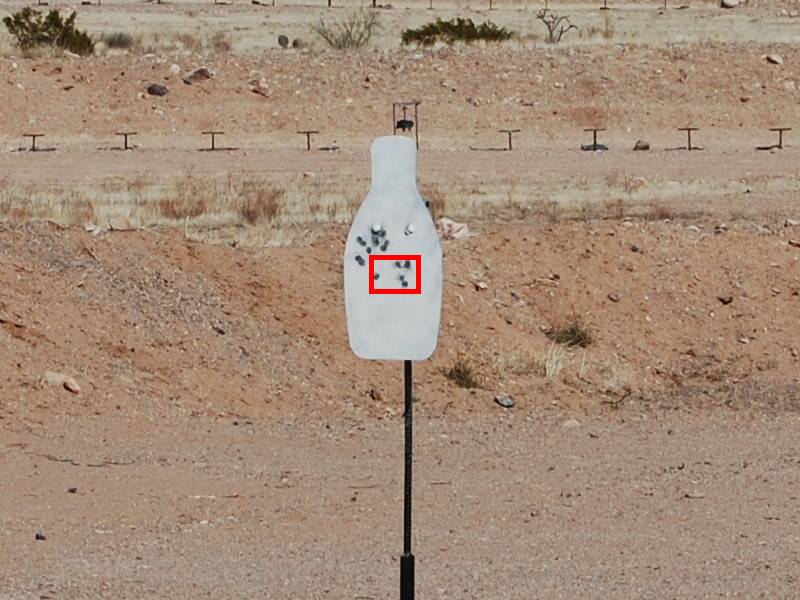 I cycled through about 100 snap cap/live ammo drills, working on minimizing the anticipation of the shot. This was the last series of the session, 5 shots, each starting from the low ready at 25yds: 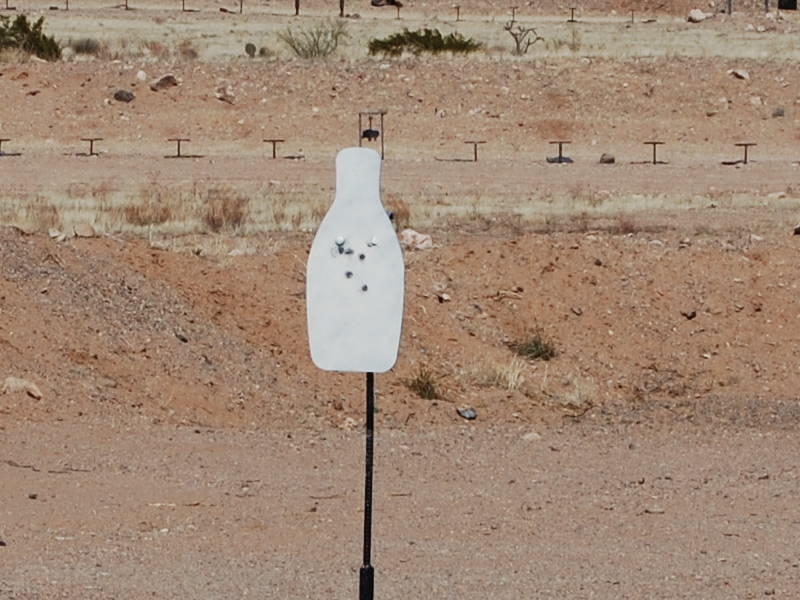 Working with the Springfield has been a nice change of pace from the long guns. The XDM points well and is similar in size to the 1911 I'm used to. I think it is easily capable of consistently shooting five shots into 3" or less at 25yds, if the shooter is capable.

Location
Down by the River

Are those the stock sights? I have the 4" barrel XD in .45 with the TNS. Lovin' it too. Don't have the same amount of rounds thru it.
W

If I was looking for a high cap polymer gun, would be on my short list. We can't get them in MA, even though they are made here! :uhh:
B

best polymer gun ive had is the fn5.7... great high capacity mag and great for conceal

I had looked at the XDm 9mm, but did not like where it was made (stamp on the reciver)

My Dad just got one yesterday, I tried to talk him into a Glock. Now he wants either a laser or light/laser combo for his. 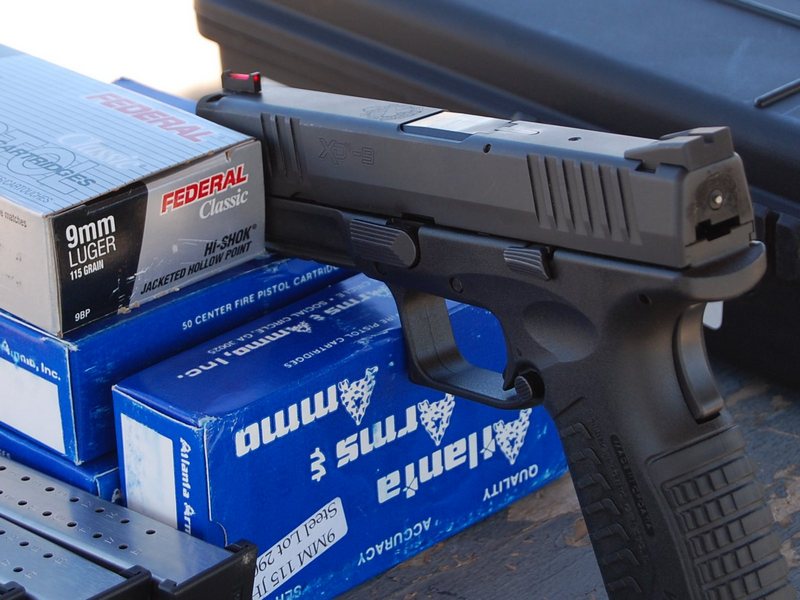 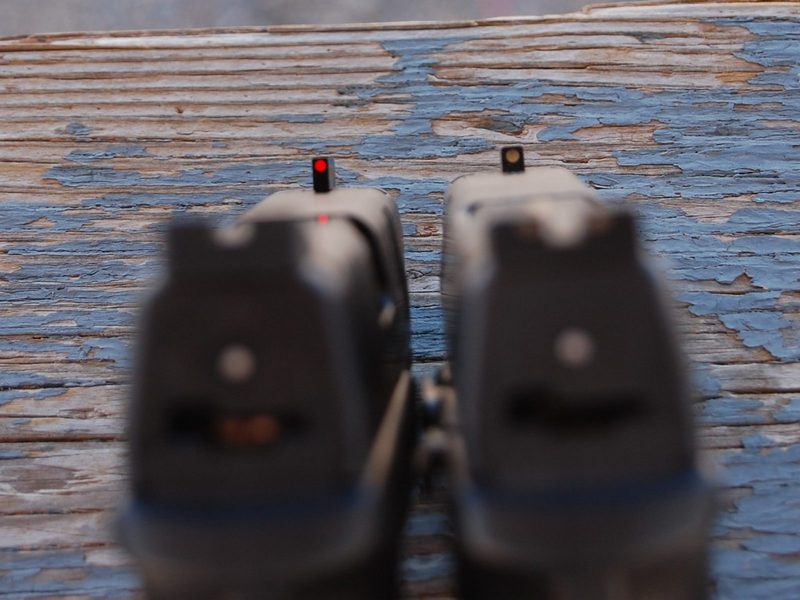 Springer did great work and had it in my hand six days from ordering. Shot it today and the trigger job provides a noticeable improvement. Very windy today so I did not shoot any paper. Put about 300rds through it on steel, shooting 5-50yds. 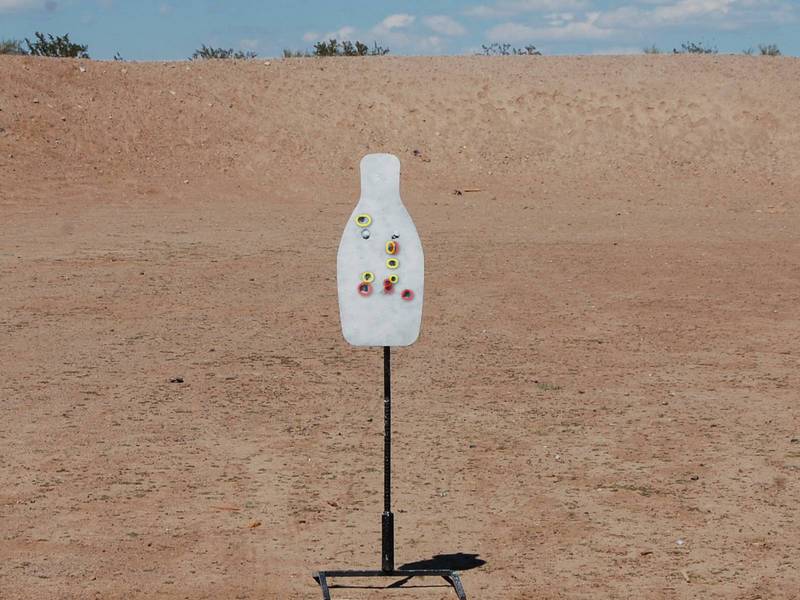 I think I'm going to like this one a lot and will probably have my first XD(M) modified to match. Might have a Barsto fitted....

I was going to ask Bootstrap where he can carry the 5.7 for concealed carry.... but noticed he's banned.

TN has a caliber limitation if I remember correctly...
B

What's with the palm safety? You like it? Any input?

The grip safety is totally natural for me. It does not need an extension or swell like some of the 1911s.

I do not even notice it.

Not even noticed, Boondock.
B

Short day, about 100rds. Really tried focusing on seeing the sight and if it was 'better' than stock. Did this by shooting mostly at around 15yds and 7yds, slow and rapid fire. I would say it is a defianate improvement over the stock sights. I like the more narrow width on the front and how it allows more daylight in the rear notch, fiber stands out good and is easy to follow/find.

End of the day, comfortable rate of fire, offhand, ammunition from AAA, 115jhp: 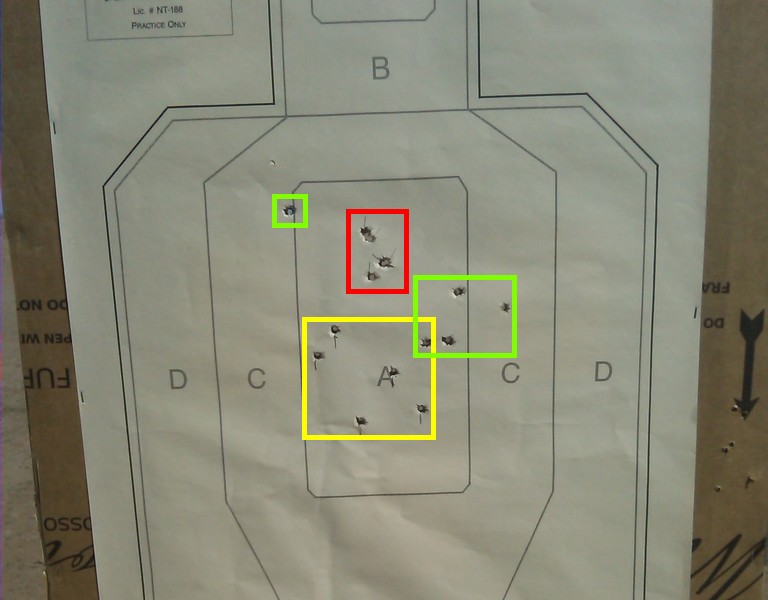 I can't stop shooting this damn thing! I'm like the wee lad that just learned to jackoff 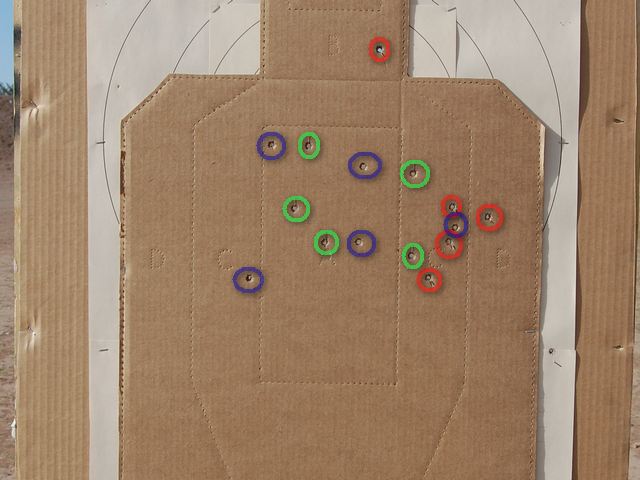 I'm going to go back to the snap caps for a few hundred rounds and see if that helps iron out some of my trigger work. 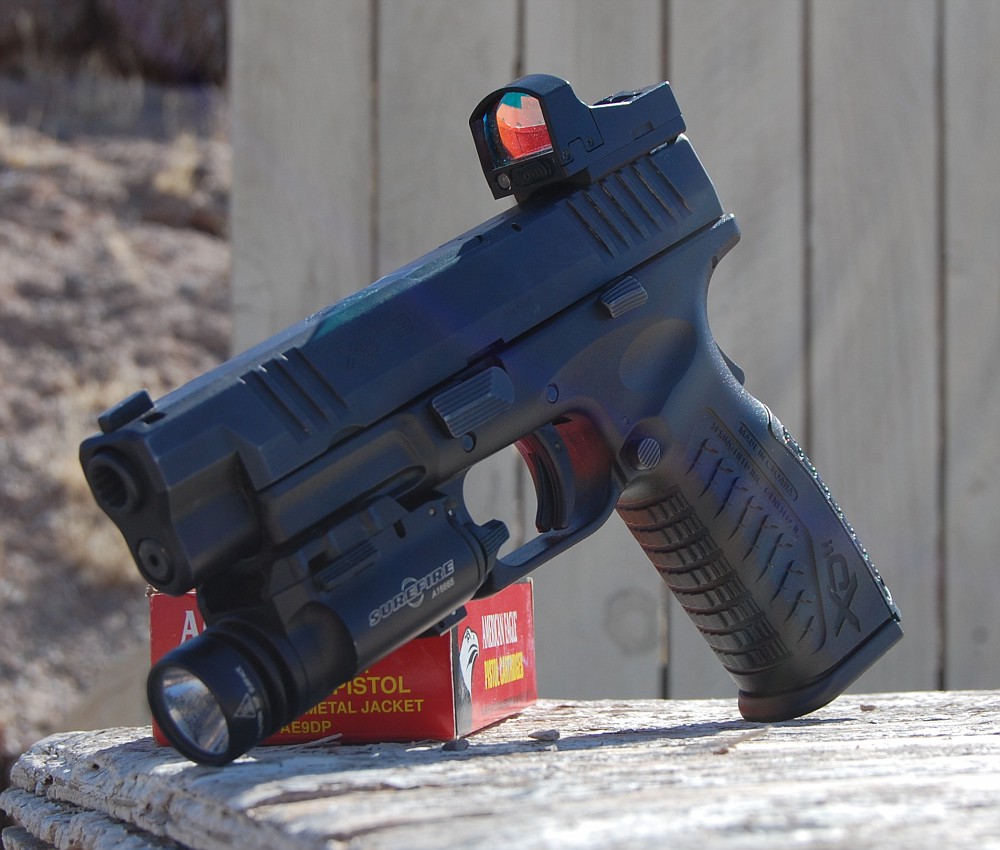 Dude you shoot better at 50 yds than I do at 25 yds :doh: I shot my buddy's XD 9 and it felt pretty good to me. Still prefer my Glock though

I still need to get that MRD sight zeroed, it is out of elevation travel and shooting high. I ordered some shims, cool, but now I need different screws as the originals are too short w/ the shim in place.

But, I got this one back from Springer Precision yesterday. Turn around was about 10 days on getting a Barsto barrel fitted. I could of tried a drop in barrel but figured I might as well get a Barsto and have it fitted by a smith.

I only have about 150rds through it so far. Most of the shooting was rapid at about 7yds, seeing how it functioned and I did some at 100yds.

These were the accuracy work at 25yds: 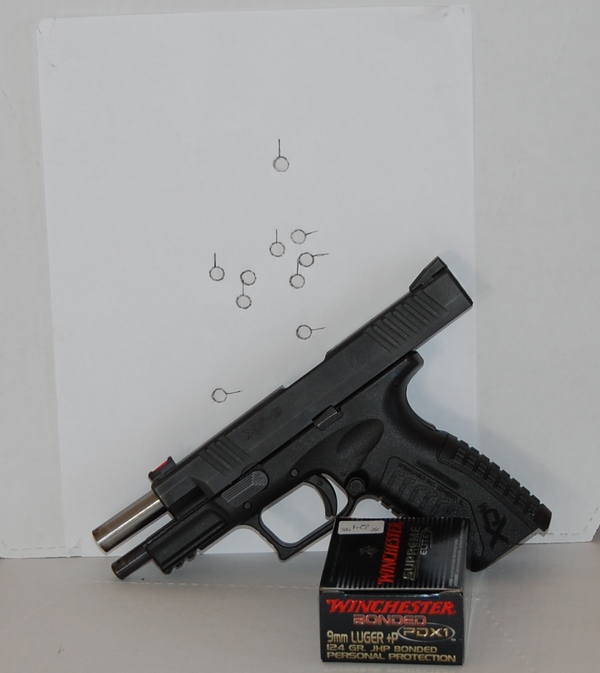 Same setup expect the ammo was the AAA 115jhp(re-man). Shooting the squares is more difficult, they blur and seem to shift a little, left and right. I think it is an eyesight issue. Larger circle tgt I did not notice it. Sights seem to prefer a six o'clock hold. Held bottom on the squares and center on the circle. Now that I'm thinking about it, I wonder if I'm focusing on the fiber optic dot and not the top of the sight? I think I was focusing on the top center of the post....:uhh: 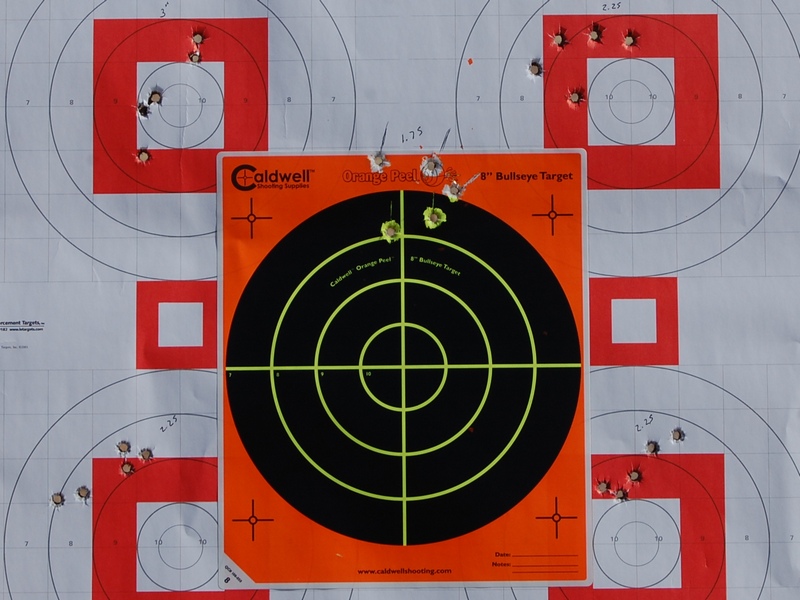