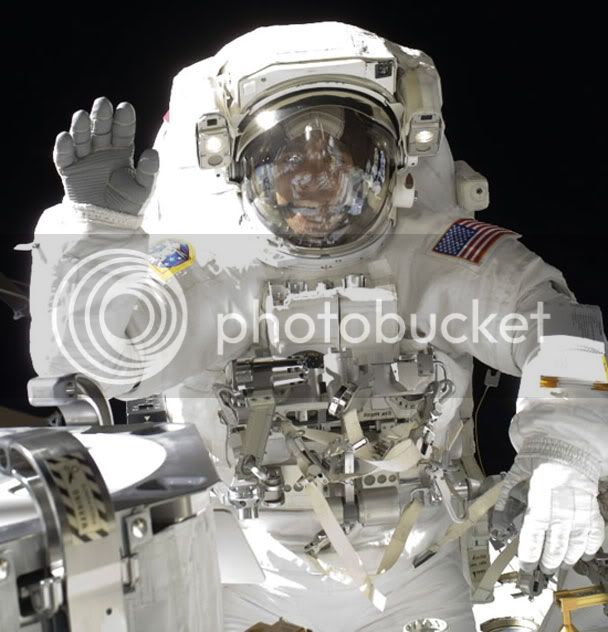 Chris Cassidy said hi to the camera during a late July spacewalk.

As Hurricane Bill whirls around the Atlantic, we talked with US astronaut Chris Cassidy, a former Navy SEAL who saw all sorts of atmospheric disturbances during his 16 days in orbit this summer. Cassidy, a Salem native who grew up in York, Maine, and later lived in Lexington while getting a master's degree at MIT, talked about mixing with 12 colleagues in space, long morning bathroom breaks, and readjustment to a sweltering summer on Earth. (A rabid Patriots and Celtics fan, he also asked us about Tom Brady's rehab). Here are excerpts of our chat:

Q. What was the scariest part of your trip?
A. Everybody expects to say the launch, but you kind of expect that to be bumpy. But the part I didn't anticipate to be rocky was the rendezvous. Both vehicles are traveling 17,500 miles per hour, and we're lining up our vehicles. ... When the hooks latch, and the indicators tell us that everything is stable, then it's a big sigh, and you can start opening some hatches and shaking hands with buddies on the other side.

Q. Lot of people on that mission?
A. In the mornings, it was kind of crowded, waiting for the bathroom. At dinnertimes, it was crowded, too, but you were talking about the day and thinking about what was to come the next day. (Dinnertime music came from the five countries represented -- the United States, Russia, Belgium, Japan, and Canada.)

Q. How long had you been in the astronaut program?
A. I was selected in August 2004, and it took two years to go through astronaut candidate training.

Q. How long were you in training?
A. We got assigned to the crew about 15 months before the mission, really intense training probably the last nine months.

Q. Another mission in the cards?
A. Well, the (US) space shuttle is going to be retired in another year and a half, so there's really no shot for me there. It's highly likely that I could be launched on Russian Soyuz rocket space station, but the timing on that is still TBD... We, as the United States, won't have the ability to get humans to space ourselves until the new system gets built, maybe 2015 or 2016.''

Q. So are you learning Russian?
A. That's a next step. I can order a beer in a pub, but I don't know how to talk about oxygen valves and opening and closing them. I have to learn technical Russian ... We do have an immersion program, five weeks in Russia, living with a family.

Q. With this backup, are some astronauts thinking of leaving?
A. Folks who have been here 10 years or so, done a couple of shuttle missions, about 50 years old -- it makes sense for them to try something new. (Cassidy, 39, added that with a wife, Julie, three school-age children, and a nice home south of Houston, he is in no hurry whatsoever to move on, other than to make NASA public relations trips to Canada, Japan, and likely this fall to New England, where his father and mother still live).

Q. What's recovery been like? BBQs? Trips to the multiplex to see "District 9"?
A. It was kind of like right back to normal life. We landed in Florida in late afternoon, did some medical checks. That night, I did some things with my family in Florida, and then we flew back to Houston the next day. There was a welcome-home party, and then it was cleaning pools and the normal things. ... We aren't allowed to drive for three days, and my legs were weak for about a week.

Q. The pool part sounds nice.
A. Down here, you've got to have a pool in your house.

Q. This was your first trip in space. What number does that make you?
A. In fact, I was the 500th human being in space.

Q. Did you get a prize?
A. (Laughs). I won a Laurel and Hardy handshake from my crewmates.
Click to expand...

Pretty casual guy...doodle around in space, get home and clean the pool. :)