We had some good times back in the day in that CQB office, but by now some of you have to be wondering about this "Gunny Williams". GySgt. Williams was a good Marine and a leader, but he wasn't cut out for the energy and antics of all those grunt Sergeants; especially when we were down, and trapped in that office with no rounds to shoot or Marines to train. Gunny was an Air-winger by trade, and he was thrown into our office to keep things civil, it was an Admin position for him - he didn't do any teaching. He was a good leader in the sense that he could keep us all together and not in front of the 1st Sgt., but other then that,,, and being a RSO -- he was useless.

We wanted to get a real snake and scare Gunny with it cause he didn't like snakes, and we wanted to put it on him while he was sleeping. But Captain wouldn't let us, and we didn't want to go against him, again. So the new plan with the "snake" was to take some 550 cord and tie it around the end of a big rubber snake, and then hide it behind Gunny's desk - nothing to see here, move along folks - we plan to drag the snake out like a dope on a rope.

So we wait til Gunny's sleeping in the office (it was hell week) and then we start pulling the snake out from behind his desk. He appears to feel something and we tug on it a little more..... and then we yell...oooh shit Gunny there's a big snake in the office..... 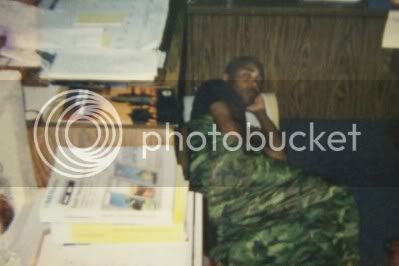 Above is a picture of Gunny Williams curled-up on the floor of our office during "hell week".

Below is a YouTube clip showing ANOTHER occasion in the office with Gunny and the snake, by now, as you can tell by the ending, he's onto us a little......