US swaps Saudi for Iran

So, here we are, fittingly (Or coincidently) on the eve of the 9/11 anniversary.

Khamenei and his henchman are literally laughing their asses off with regards to how much they will wind up with, knowing full well, how much this agreement is all smoke and mirrors. 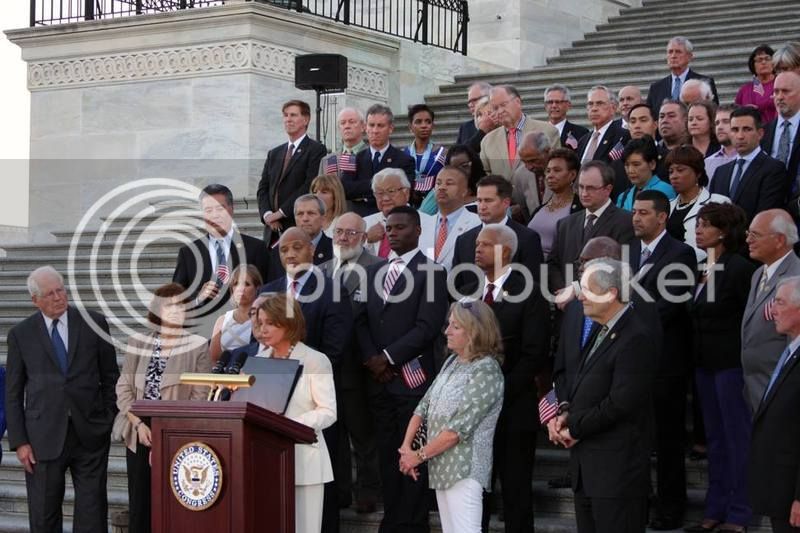 (Caption reads "We stand in support of the agreement.")

All you need to know is who's standing at the lectern. (And, I'm sure she and everyone else has read the complete agreement .....yeah, right) This isn't about national security, which has become a running joke for the last 7 years, it's all about politics and saving face. That's the main reason these idiots, once again, found a way around congress by making it an "Agreement" rather than a "Treaty." At the onset of this, months ago, 99 out of 100 Senators voted in favor of bringing this up for debate. Harry Reid effectively "Filibustered" the possibility of that ever happening, in true Harry Reid fashion, much like how the ACA (Obamacare) was shoved down our throats. The devil is in the details.

Not to mention that the side deals, (Most of which have been and are still being withheld) are in direct violation to the Corker Iran Nuclear Agreement Review Act of 2015, the very same, which the president himself signed. No one it seems, including him, or in this administration, abides by the laws, when it comes to getting what he or they want. And as for the rule of law, that has become a joke in the last 7 years as well. This shouldn't have anything to do with dems or republicans. It should have everything to do with common fucking sense, instead of towing party lines.

Even if the next President comes along and overturns this agreement, it won't mean a hill of beans, as Pandora's Box will have already opened, seized funds will be immediately transferred back to Iran and any possibility of "Snap Back" sanctions will become as useless then as anyone who's read any part of this agreement, already knows now.

Iran get's everything and we once again, get a sham, with no teeth, along with a whitewash of supposed inspections that will run in Hans Blix mode and resemble the same, when the Iranians start to play hide and go seek.

Only a fool would hand over a loaded gun to an angry man. That's exactly what we're doing here. This administration knows as much about national security and foreign policy as Big Bird......

"We got an incredibly good deal" my ass.

Every member of the White House/Congress/Senate who agreed to this deserves to be put up against a wall and shot.
G

The core truth for me in this ridiculous agreement is that we are ignoring the fact that you need a lot more centifuges to produce nuclear power than you need to produce a bomb. So, in effect, by making them cut back to 500 centrifuges we are limiting their ability to generate nuclear power and facilitating--or at least not impeding--their ability to make a nuclear weapon. :wall::wall:

DUBAI (Reuters) - Iran has discovered an unexpectedly high reserve of uranium and will soon begin extracting the radioactive element at a new mine, the head of Iran's Atomic Energy Organisation said on Saturday.

The comments cast doubt on previous assessments from some Western analysts who said the country had a low supply and would sooner or later would need to import uranium, the raw material needed for its nuclear program.

After decades of efforts, Iran - which has consistently said its program is for peaceful purposes - has achieved a full nuclear fuel cycle, ranging from the extraction of uranium ore to enrichment and production of fuel rods for nuclear reactors.

Sanctions on companies taking part in Iran's uranium mining industry will be lifted when the agreement is implemented.
Click to expand...

Dame said:
Well, what do you know?
Click to expand...

SHOCKED! I am utterly shocked at these recent developments and do not think the good, peace-loving people of Iran staged this announcement.

Freefalling said:
SHOCKED! I am utterly shocked at these recent developments and do not think the good, peace-loving people of Iran staged this announcement.
Click to expand...

It will be used for their peaceful nuclear weapons program and nothing more.

Now that Iran has their 100 billion in assets back they can go on a shopping spree.

Boeing has been invited to talks with Iranian officials about modernizing Iran’s aged commercial aircraft fleet, the country’s transport minister said Thursday, in what could be a precursor to the biggest business arrangement with an American company after more than three decades of estrangement.

Boeing said last month that as an outcome of the nuclear agreement, it had received a license from the United States government to conduct planning discussions with Iran about an aircraft fleet, a step meant to assess Iran’s needs before any negotiations for purchases.
Click to expand...

Location
The Peoples Republic of Anzacistan

Yep, that agreement they signed was a sweet deal for them, fer sure.

Iranian sub in Strait of Hormuz

Behind the Rise of the Shi'ites

B
Year in Review 2007: Mideast: Progress in Iraq, but toll for U.S. is still high