Wow..she must be a gem. Makes me wonder how in the world she attained this position in the first place. :uhh:
And could someone tell me what is a Naval Laboratory?

March 4) -- In a blow to the public image of women in senior military positions, a female Navy captain was removed from command of a destroyer after an inspector general investigation found that she verbally and physically assaulted crew members and forced subordinates to walk her dog and entertain at a personal party.

Capt. Holly Graf's tenure in charge of the guided missile cruiser Cowpens included numerous cases of belittling crew members in a manner that apparently shocked even hardened sailors used to foul-mouthed ship behavior, according to investigators. "What are you, f******* stupid?" was apparently a regular Graf refrain.

The report, which substantiated several of the claims made against Graf, brought an end to her time on the ship. The military newspaper Stars & Stripes reported Graf's removal in January for abusive behavior, citing the inspector general report, which had not been publicly released at the time.
A few days ago, however, the Navy released a copy of the report to the Admiralty & Maritime Law blog, and a copy was obtained by Time magazine under the Freedom of Information Act. The Time article, which includes extensive interviews, painted Graf as a modern William Bligh, a reference to the 18th-century British naval captain whose infamously harsh treatment sparked a mutiny on the Bounty.

The question being raised now is how Graf was able to rise through the ranks and stay in command as long as she did. Even before the inspector general report was released, Graf's exploits as captain of the Cowpens proved rich fodder for national security bloggers and blog commenters, who discussed her alleged misdeeds, including an allegation that her ship had plowed into a whale (and that she had tried to prevent pictures being taken of the dead mammal).

"Apparently this is the same Captain Graf who reportedly mowed down a whale on the high seas, and who seriously offended an Australian official during a port call," Susan Katz Keating, a national security reporter, wrote on her personal blog. "Captain Graf also was known for her skills at coffee-cup-hurtling but not seamanship."

Not all of the allegations against Graf could be backed up by the inspector general, however. For example, the report could not substantiate that some of her alleged actions, such as a high-seas drag race between her ship and the USS John McCain, an Arleigh Burke-class destroyer, put her crew in danger. "Multiple witnesses interviewed by the [inspector general] and the commanding officers of both ships all stated that the ships were racing," Pacific Fleet spokesman Cmdr. Jeff David told the New York Post.
But the captain of the McCain apparently defended Graf, saying she halted the race and that neither ship was ever in danger.

According to Time, Graf is now assigned to a naval laboratory.

Chopstick said:
According to Time, Graf is now assigned to a naval laboratory.
Click to expand...

Wonder if she is working there, or if she has a big spinning wheel to run in while scientists look at her ;)

Chopstick said:
Wow..she must be a gem. Makes me wonder how in the world she attained this position in the first place. :uhh:
And could someone tell me what is a Naval Laboratory?
Click to expand...

A place where you study belly buttons?

SOWT said:
A place where you study belly buttons?
Click to expand...

Bet she curses at em.

Cursing? You go PC military! While you can obviously go too far, some folks need to dry their tears. Now, drag racing another ship is kind of dumb, walking the dog is a downright asshole move and she should be fired for that alone.

And because someone will ask....my answer would be No, but to each their own. 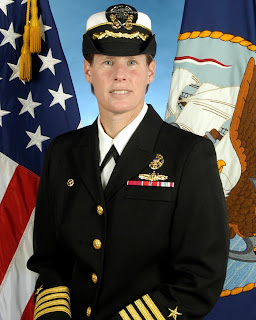 Cursing is one thing but constantly belittling and degrading your subordinates in front of THEIR subordinates is poor leadership. Here is a leader to President Obama that militarycorruption.com has generated to complain about her continued service: http://www.congress.org/congressorg/bio/userletter/?id=3181&letter_id=4537909426

Here are some of the allegations:
"...But a commander "man-handling" a crew-member, in this case (we are told) by grabbing that person around the throat, is way beyond the pale. It is inexcusable! "

"Capt. Holly Graf has gotten away with plenty since she graduated from the Naval Academy in 1985. The fierce, foul-mouthed martinet - who more than once hurled coffee cups and other objects at underlings who had "displeased" her - was protected for years by indulgent brass hats and superior officers who didn't dare anger the feminists and politicians who demand total "political correctness."

(FROM A CLASSMATE OF HOLLY GRAF - AND LISA NOWAK)

"She (Graf) was an incompetent b...h, whose only concern was for herself. She saw subordinates as either stepping stones or objects to crush. A horrible woman!"

(FROM A FELLOW OFFICER WHO SERVED WITH GRAF AT SEA)

"I knew her when she was an XO on a destroyer. (MCC withholds the name of the ship to protect identity of writer) The news of her relief of command, especially for cruelty and maltreatment, that doesn't surprise me at all. What took them so long? She was mean and sadistic back then, and didn't give one damn about the crew."

(FROM A NAVAL OFFICER, NOW RETIRED)

"Graf was an arrogant, obnoxious brat who knew she could get away with anything. In my 24 years in the Navy, I never met a worse officer than her. The woman was malicious and just "out-of-control." Thank God she won't make admiral now. Her ticket was already punched. The CNO is nuts if he lets her stay in the Navy after this."

Take it for what it's worse, I am sure the truth is somewhere in between the official report and all these gripes.

Here are some pictures of the drag racing: http://www.militarycorruption.com/

“As matters stand now, a private who loses a rifle suffers far greater consequences than a general who loses a war” - LtCol Paul Yingling

Wow what a bitch.........I can't believe someone did not beat the shit out of her, throwing a coffee cup my way would be worth the UCMJ punishment of beating that bitch down. You want me to walk your dog eh? Pooch would some how jump off the side of the ship after a bird...... Me thinky she would not have made it very far in the Army.....

Fuck I'd hate to see how they'd react around any one in our Army. ;)

"...she verbally and physically assaulted crew members and forced subordinates to walk her dog and entertain at a personal party."

I shudder to think what that means. :bleh:

She is a disgrace to her uniform and deserves a dishonorable discharge IMO.

Oh her sister is a Rear Admiral...hmmmm.

"Graf's big sister, the more feminine-looking Admiral Robin Graf of the Navy Recruiting Command, is a Cornell grad and much better thought of than "the screamer." But, is the powerful flag officer "pulling strings" to get Holly Graf a Pentagon billet for the next few years? That's open to question, but we'd like to think the good admiral knows her sister needs help, not another "free pass" from castrated male superior officers, frightened to be perceived as "politically-incorrect."

Sexy, too...like gorilla-diarrhea. Can you say, "Missing at sea?" "Woman overboard?" She--and I use that term loosely--is lucky to have made it back to port.

Chopstick said:
Oh her sister is a Rear Admiral...hmmmm.

Feminine-looking vice good looking. I'd hit the Captain; tell her to bend over so I could walk the dog.

SOWT said:
Feminine-looking vice good looking. I'd hit the Captain; tell her to bend over so I could walk the dog.
Click to expand...

Here are some excerpts from the IG report.

Interesting, there are some pussy comments in there but she is still a disgrace and a shitty leader IMO.

This I thought was funny though... "I thought you flew fucking all-weather aircraft. now fuck me to tears." lol

Damn. I'm not even that bad. What a cuntwipe.

racing_kitty said:
Damn. I'm not even that bad. What a cuntwipe.
Click to expand...

Your rants are appropriate to time and place IMHO.;)

I read a Newsweek account of the Captain which was much more specific in detail about her behavior, but I can't find the article anymore

One particular incident that was disturbing was putting the Chief of the Boat in a "Time Out". Making him stand is a side room in front of the crew. The problem wasn't using curse words it was the belittling of her subordinate in front of there subordinates that was the problem.

I think she was an extreme example of a person that Kisses Up and Kicks Down. The Newsweek article said the IG reported that she was almost incredulous by the accusations hurled at her and that she talked about the boat in terms of "group think" and the great atmosphere but when the crew was interviewed there was a completely different story.

Some of the accusations seemed kind of week, like the "crew assault" because of a thrown piece of wadded up paper. But there was also accounts of her throwing non-foam coffee cups at the crew. I just think the interviews were so one sided they didn't have a choice but to remove her.