I saw this posted in a "US Army Vets" Facebook page that a friend invited me to. This was apparently purchased at a yard sale by one of the people in that group. Typical of FB there was a lot of bashing as to why anyone would buy/sell such an item at an estate sale. However, no one completely posted a lucid answer at to what all of these ribbons actually are. I have not a clue nor do I have any idea who these belonged to or where they were purchased. I think it is a little sad that these ended up in a yard sale. I thought it would be nice to post it here so that it's owner could live on a bit as it were, with the military members of SS. 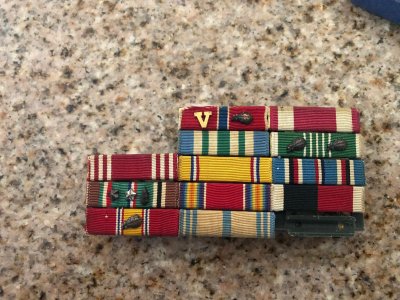 This may be a rack of a WWII vet.

I don't know why people get upset when this kind of stuff turns up for sale. It's an old ribbon rack. Most longtime service members have multiple ones. If the former owner is like a majority of veterans, he was probably buried wearing the rack that mattered to him.

I bet if I went out in my garage right now I could dig up at least ten old ribbon racks that I've had over the years. The ribbons get dirty, one will fall off and get a hole in it, or you'll get a new award or two and need to upgrade the rack. None of my previous racks or ribbons mean the slightest bit to me. I've got one that I care about, and my family knows which one it is.

When I'm gone, I hope they bury me with the ribbons that are attached to my dress blues, and don't worry about what people on the Internet think about what they do with any of the other ones that I haven't managed to divest myself of.

Is it missing a couple on the top left or is that just the order of precedence?

SpitfireV said:
Is it missing a couple on the top left or is that just the order of precedence?
Click to expand...

As @LimaPanther said it is most likely is due to wear on a dress uniform. It keeps the top row from going under the lapel.

Kaldak said:
As @LimaPanther said it is most likely is due to wear on a dress uniform. It keeps the top row from going under the lapel.
Click to expand...

That makes sense, thanks.

SpitfireV said:
Is it missing a couple on the top left or is that just the order of precedence?
Click to expand...

Traditional alignment so that they’re not covered by the dress jacket lapel.

Mine are aligned to the right for this reason.

Makes a lot of sense. I was looking at some pics of the NZDF formals and it looks like they wear the ribbons lower on the breast than you guys do so probably why I hadn't seen it before.

Funny this thread turned up. My FIL recently passed away. 6th Marines plus a stint guarding nukes at Campbell ( the bunkers the 160th uses during green platoon) as a machine gunner in the late 50’s, early 60’s. Anyway, we have his rifle and pistol qualification badges and his good conduct medal. I think my wife has others from him, but I’m not sure.

Given that her sister doesn’t know anything about the military, or care, and my wife and I both served… I told her to bring home every military-related anything and we’ll go from there.

He was also a Seabee in the Navy Reserve, so there’s no telling what he has in his home.
G

Marauder06 said:
Mine are aligned to the right for this reason.
Click to expand...

Independence Day aka 4th of July

Americans Will Not Fight for America
2 3 4

Protester at NBA game taken to the paint…