Location
In your worst nightmare.....

I can remember hunting them growing up in Oklahoma and Kansas. If they can be reintroduced in Yellowstone, viable populations could be established in the Plains states again. 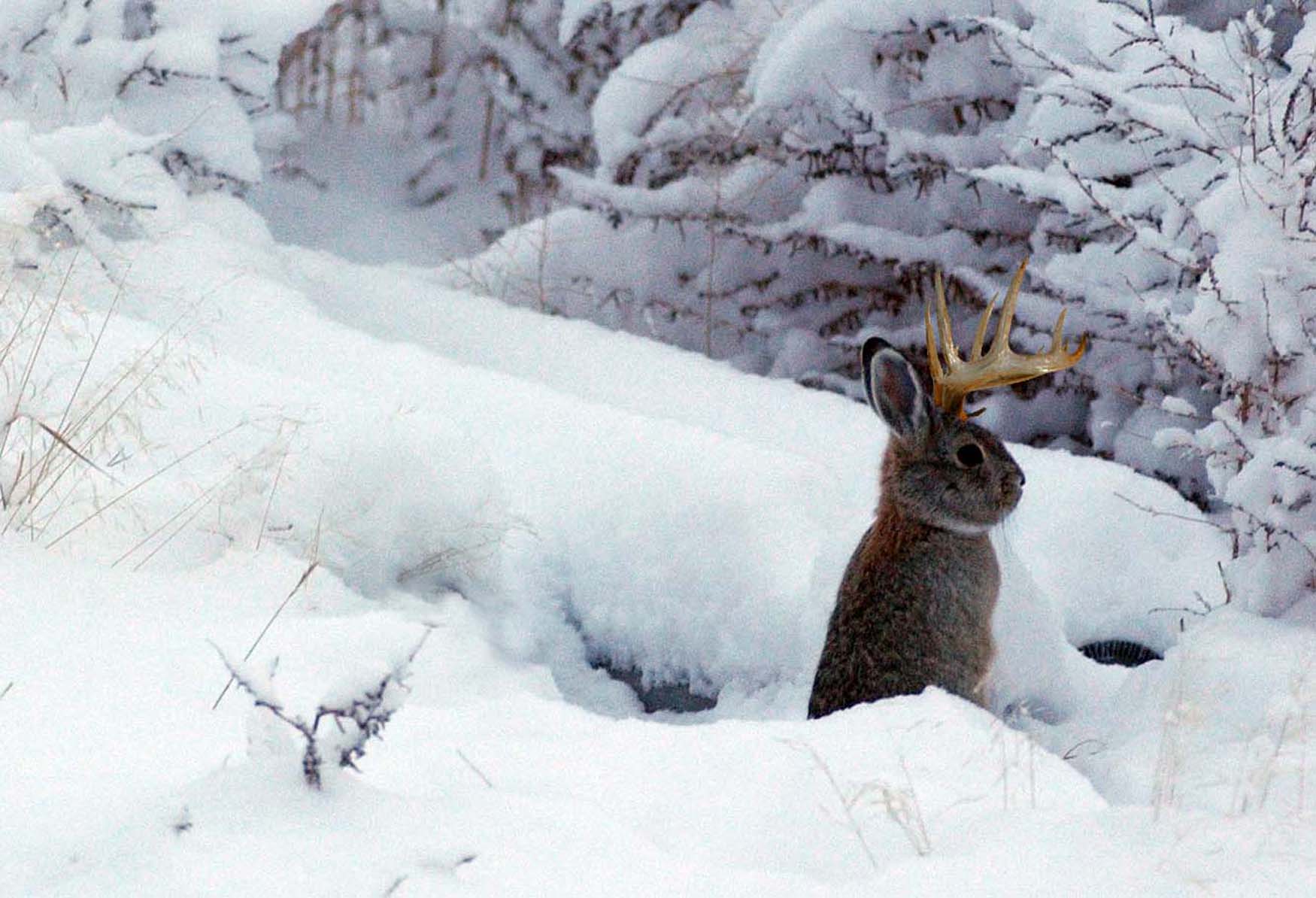 By Ruffin Prevost
BOZEMAN, MONT. — Federal wildlife managers say they are in the early phases of reviewing a petition that seeks to reintroduce the gray prairie jackalope to the greater Yellowstone area, but they have not set a deadline for acting on the filing.

Attorneys for the Biological Equality Foundation on Friday submitted the petition to the U.S. Fish and Wildlife Service, according to agency spokesman Craig Jimmeson, who declined to comment in detail on the petition.

Citing more than a dozen state and federal wildlife and habitat studies dating back to 1992, the Colorado-based Biological Equality Foundation stated in its petition that the “Yellowstone jackalope has been reduced to pockets of isolated population groups across a tiny fraction of its historic range.”

Elected officials from communities around Yellowstone, as well as representatives from the sheep ranching industry, said a wide-scale return of the jackalope would be expensive, difficult to manage and potentially disastrous to both wild and domestic sheep herds.

“Here we go again. I don’t understand why the federal government and these special interest groups can’t learn to leave well enough alone,” said Wyoming Rep. Teetrick Huddleton (R-Cody.). “This will be worse than the wolf ever has been. It’s a Pandora’s bag of potential problems waiting to happen.” 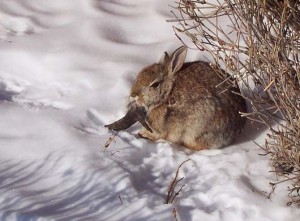 A common rabbit aflicted with the Shopes Papillomavirus. (Flickr photo by WD45)

Sheep ranchers blame the Yellowstone jackalope for the spread of Shope papilloma virus to domestic sheep herds, although the scientific community is divided over whether the disease is more commonly transmitted in the wild by jackalopes or by bighorn sheep, which also carry the virus.

Terrence Rovak, spokesman for the Biological Equality Foundation, said thriving jackalope populations in northern Australia and southwestern Canada have proven beneficial to their habitats, restoring native forbs and slowing the spread of dalmation toadflax and other noxious weeds. Rovak said the same result is likely in the greater Yellowstone area if jackalopes are allowed to propagate freely.

“Hunting, trapping and poisoning the jackalope to the brink of extinction has had widespread negative effects on large-scale ecosystems across the Rocky Mountain region, and it’s high time we took steps to reverse that sad state of affairs,” Rovak said.

A Yellowstone find
Ridiculed throughout much the 19th century as myth and folklore by East Coast journalists and academics, the gray prairie jackalope is a distinct species of large rabbit, Lepus temperamentalus, that is a genetic cousin to both the cottontail and jackrabbit.

Early white explorers to the West told of encounters with reclusive but fearless large rabbits with antlers or horned protrusions. But the reports were dismissed as tall tales until confirmation of a Yellowstone jackalope by the Hayden expedition to the Yellowstone area in 1871. Expedition photographer William Henry Jackson captured the jackalope on film, proving the myth to be a reality.

Biologists working for the U.S. Geological Survey in the early 1880s determined that the jackalope’s “horns” or “antlers” were actually the end result of what is now understood to be the species’ severe genetic vulnerability to the Shope papilloma virus, a disease which some believe may have first been brought to North America by European sheep herds. The disease causes bony growths from animals’ faces and heads that appear similar to antlers.

The U.S. sheep industry has struggled to eradicate the disease, which can cause bony growths in lambs during their first two years. Vaccines are costly and only partially effective. Yellowstone Park spokesman Stan Thatch said park managers had not yet had a chance to review the petition, but that planners would seek extensive public comment on the proposal before any action is taken.

“At this point, all that has happened is that a group has filed a petition under the federal Administrative Procedure Act. It will be up to the U.S. Fish and Wildlife Service and — in all likelihood, the federal courts at some point — to decide what action, if any, is taken,” Thatch said.

Inherent inequities
Elected officials in Park County, Wyo. have already said they will challenge any plan to reintroduce jackalopes to public lands east of Yellowstone Park or inside the park itself.

“There are inherent inequities in the unfunded mandates that arise from these kinds of programs, and that’s the concern I’ve been asked to look into from a legal perspective,” said deputy county attorney Dave Purvis.

The jackalope issue has long divided the town of Douglas, Wyo., the last native stronghold of the animal in the northern Rockies. Advocates of jackalope hunting — banned in the U.S. since 1932 — have often sparred with a growing movement of conservationists who advocate a so-called “smart-growth” policy of jackalope management, billing the reclusive creatures as a potential tourist attraction.

The long-simmering dispute took center stage in 2005 when the Wyoming House of Representatives passed a bill granting the jackalope special status in the state, but the Senate failed to act on the measure.

Huddleton said he opposed the 2005 measure, and would fight any new bill extending further protections for jackalopes.

“They’re a threat to ungulates, they have literally decimated the sheep industry single-handedly and they represent a potential scourge of disease that can’t be undone once unleashed,” Huddleton said. 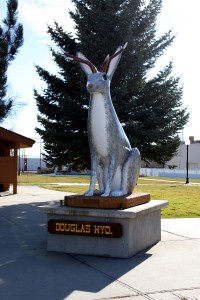 Sharm Dresden, wildlife policy specialist for the Friends of Yellowstone Alliance, said it would be unfortunate to dismiss the prospect of a jackalope resurgence across Yellowstone and Grand Teton national parks and surrounding communities.

“They may not be the most charismatic animals, but jackalopes fill an essential role in the ecosystem, and we’re unlikely to reach a long-term habitat balance until their numbers are restored,” Dresden said.

Based in Ralston, Wyo., the Friends of Yellowstone Alliance has funded captive jackalope breeding programs in Barley Basin, S.D. since 2003. Jackalopes from Barley Basin have been released on private game preserves in Australia and Canada, and a proposal to return up to 128 breeding pairs of jackalopes to tribal lands in Idaho is awaiting federal approval.

I can still remember as a kid seeing them occasionally while rabbit hunting. I have a friend who shot one by mistake and the DNR took his shotgun away and fined him. As I recall, they are at the same level of protection as the bald eagle. My kids and I still hunt the same grounds in northern Minnesota, but it is been years and years since I have seen one in the field.

Thanks for posting this!

That is the most absurd looking animal I have ever seen.

This is arguably the most important and under-reported conservation issue we face today. If you sign only one petition this year, sign this one.

Are they going to introduce the West Texas Jackalope to strengthen the bloodlines?
R

They are lovable, and love to cuddle, the problems are obvious.

x SF med said:
Are they going to introduce the West Texas Jackalope to strengthen the bloodlines?
Click to expand...

Good point. It has been observed of the West Texas breed, that they have HUGE fangs, and are rather fleet of foot. I have heard stories of the West Texas ones chasing down Jeeps, on open ground, up to 30 MPH. They bite, and deflate all the tires, and then just shred the soft topped models in a matter of minutes. There was some short footage of the West Texas boys showing their fangs in the Johnny Depp movie "The Lone Ranger"; the antlers were not well lit in the short film bite.
Last edited: Feb 4, 2016

Here's a rare picture of the near extinct Canadian Giant Jackalope. Sadly only a few domesticated breeding pairs remain on ranches out West.

That's why I shouldn't come on here early. Waste of good coffee damnit.

But even I can do a better PhotoShop job than that.

Location
Halfway between Heaven and Hell

But even I can do a better PhotoShop job than that.
Click to expand...

Photoshop? Sir, are you impugning the veracity of the membership here? Those pictures are real dammit!
R

RackMaster said:
Here's a rare picture of the near extinct Canadian Giant Jackalope. Sadly only a few domesticated breeding pairs remain on ranches out West.

You guys aren't taking this seriously enough. Don't you feel bad for what the chupacabras did to the northern jackalope population?

Raptor said:
You guys aren't taking this seriously enough. Don't you feel bad for what the chupacabras did to the northern jackalope population?
Click to expand...

It was Sasquatches, chupacabras can't handle the winters here, don't you know anything, jeez...

But even I can do a better PhotoShop job than that.
Click to expand...

Whoa! What's with all the hate and discontent? All I did was point out that someone is trying to lead the young minds here astray. I, certainly, would never do anything like that myself. At least @Freefalling liked the post.

Marauder06 said:
Whoa! What's with all the hate and discontent? All I did was point out that someone is trying to lead the young minds here astray. I, certainly, would never do anything like that myself. At least @Freefalling liked the post.
Click to expand...

Sarcasm via the Like feature....just another service I provide.