The Navy SEALs Break Their Silence

Founded in 1962, the Navy SEALs have long presented an irresistible conflict of interest for the military. For tactical purposes, the Navy attempts to maintain the unit's secrecy – it rarely even acknowledges the existence of the covert SEAL Team Six – while simultaneously promoting the SEALs' mystique to boost recruitment numbers. In 2005, the SEALs adopted a 440-word code of secrecy stating: "I do not advertise the nature of my work, nor seek recognition for my actions," a pledge that the Navy itself broke soon thereafter. Just over a year later, in an effort to meet an enlistment goal of increasing recruitment numbers by 15 percent, the Navy's in-house media arm began courting Hollywood producers. The resulting film, 2012's 'Act of Valor' – a work of fiction starring real SEALs who were tasked by the Navy to perform – made $80 million, was promoted in a Super Bowl ad, and its footage later used to train recruits. But just months later, ex-SEAL and Osama bin Laden–raid team member Matt Bissonnette, writing under the pseudonym Mark Owen, published 'No Easy Day,' an unauthorized account of the famous mission that the Pentagon claims broke military nondisclosure agreements (Bissonnette disputes the charges). Although soldiers have long written accounts of unclassified battlefield experiences without reprisal, the Bissonnette book so embarrassed the Navy, it responded by tamping down its public-relations strategy. The Pentagon threatened legal action against Bissonnette but would soon realize the appetite for SEAL stories had gotten beyond its control. "Navy leadership created a situation for a perfect media storm, and the tipping point was the bin Laden raid," says former SEAL and 'The Red Circle' author Brandon Webb of the growing exposure. "It's like a pirate ship gone rogue."

A Timeline of the SEALs' Crumbling Code of Secrecy
September 2012
Ex-SEAL Matt Bissonnette publishes 'No Easy Day,' an unauthorized account of the bin Laden raid. The Pentagon threatens legal action, claiming he was "in material breach of nondisclosure agreements he signed with the U.S. government," and the author subsequently goes into hiding. "He's pissed off and knows where a lot of bodies are buried," Webb says of Bissonnette, noting the Navy hasn't filed charges against him. "I'm sure he's got some get-out-of-jail-free cards."

November 2012
The Navy reprimands and fines seven SEALs – often a career-ending punishment – who acted as paid consultants on the 'Medal of Honor' video game. The SEALs discussed tactics in a YouTube video series, showed game developers how to build a bomb, and gave notes on details such as how to reload assault rifles. Matt Bissonnette was a game adviser.

December 2012
'Zero Dark Thirty' premieres. Controversy ensues over whether Navy leadership cooperated with director Kathryn Bigelow and screenwriter Mark Boal. Meanwhile, SEALs watch the film and laugh at its inaccuracies. "There was no 'one' CIA girl," Webb says. "And the last 40 minutes? Those guys were whispering Osama's name as they were creeping up the stairs with night-vision goggles. I was like, 'Really?' This is terrible. This is amateur hour."

February 2013
The supposed bin Laden shooter anonymously details the raid in Esquire, claiming to have shot the Al Qaeda leader three times in the head. This account differs from Bissonnette's book. Subsequently, CNN publishes an article in which another SEAL states that the anonymous shooter is lying. "From what I can tell, he wasn't the guy," says Webb. "He put a couple rounds in a dead body. The point man, the one who put the initial two shots in bin Laden, isn't talking. He and the other guys get pissed when they see someone like that guy embellishing the story. Now you're seeing this high school drama unfold in the news."

March 2013
The seventh consecutive SEAL memoir since the bin Laden raid tops bestseller lists, stoking expectations for upcoming projects like Tom Hanks' 'Captain Phillips' – due in October – an account of the container-ship Maersk Alabama rescue. "Now the SEAL leadership is trying to rein it back in," says Webb of the media exposure, "but they've already been participating with Hollywood, without setting guidelines for what is acceptable or not. It's gotten out of control, and it starts with the leadership."


Read the comments under the article in the link...

Comments at the bottom of the page are better than the article.

This shit keeps up they'll need to setup a octagon at The Muster this year.

Well, if we weren't so badass then nobody would want to read about us ;) lol I just hope all this BS fades away soon. It is not the message we should be sending to the younger guys in the community.

Well, it looks like the Army is gonna pick up the pace now. (joke!) 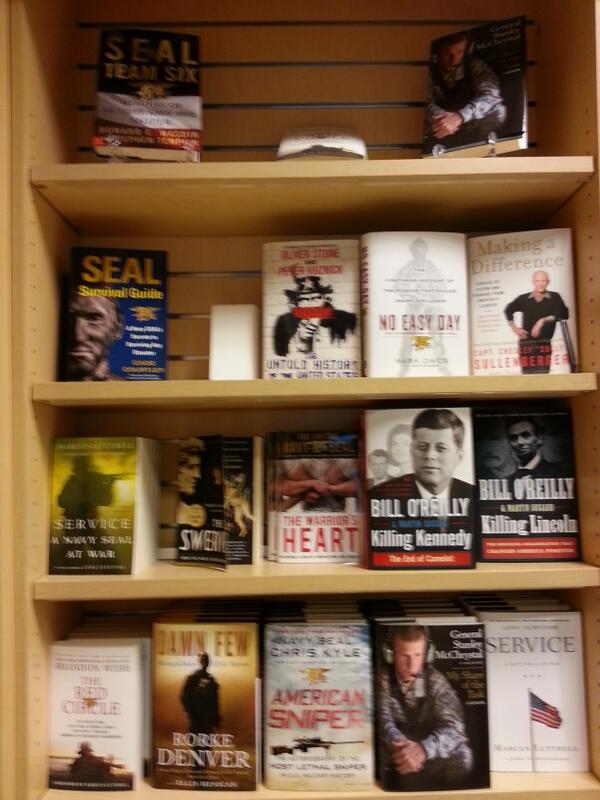 8 books by Navy SEALs on the same shelf in Philly airport bookstore.
Click to expand...

Is that your pic?

American Sniper was a very poor read. I know Chriss Kyle is an American Hero but as an author, he employed not one but TWO additional authors, and still the book is simply poor. Like it was written by a 12 - year old.
I'm very looking foreward to reading McChrystals memoir.

I miss some of the old school guys I met where it took 10 or 15 conversations to uncover their connections to the Teams. My Recon buddies in San Diego always told me the way you know a SEAL when you meet one is that the first thing he tells your girlfriend is that he's a SEAL.

Nothing wrong with being proud, but Hollywood and the Department of the Navy really created their own monster. I hope in a few years, the SpecWar guys can recapture some of the mystery. Actually - everyone should stop inviting the Discovery Channel in to watch selections and training. From my understanding, no one makes you do the MTV style interviews on those shows, so do like the DARE program tried to encourage - Just. Say. No.

As far as warfighters writing books, so many are just hard to read. Read Phil Caputo's account of Vietnam (so good) and then you can't even get 10 pages into Lone Survivor. I don't mind hearing those kinds of stories in a team room with an appropriate audience, but the tone of many of these newer books really turns me off. Americans have a voracious appetite to hear about what happened "over there," but I think that story has to be told with taste, appropriate tone, and literary talent.

I find it deeply ironic that "Dalton Fury" is giving anyone a hard time about writing books.

MedicSN, please refrain from posting until you have posted the appropriate introduction in the "Introductions" forum.

All SOF teams should just have a camera man on all OPs and edit afterwards. Cut out the middle man. Theresd be no controversy over realism. Lol.

haha, pretty much all SOF do have cameraman on all ops now.... where do you think all the pics come from in the SOF pics/Ranger pix/NSW pics thread?

One thing is for sure, I feel bad for the NSW guys that really have no interest in the limelight, but are being thrown in to the same group that do. As someone said above, it is an institutional problem that did not start at the operator level but rather in the air conditioned offices of the pentagon.

Atlas said:
All SOF teams should just have a camera man on all OPs and edit afterwards. Cut out the middle man. Theresd be no controversy over realism. Lol.
Click to expand...


I know it was a joke and I STILL hated it.
A

amlove21 said:
I know it was a joke and I STILL hated it.
Click to expand...

I heard they were going to do a movie on Pararescue too. Last I heard it got postponed because no one in hollywood could perfect the hair of the actors. Lol

Atlas said:
I heard they were going to do a movie on Pararescue too. Last I heard it got postponed because no one in hollywood could perfect the hair of the actors. Lol
Click to expand...


That is a fact. They asked actual PJ's to be in it, because there are no hollywood actors good looking enough. Bradley Cooper was supposed to play me, but, unfortunately, he's way too small.

I saw the title (SEALs plus silence) and assumed it was a duffel blog article.

Ravage said:
American Sniper was a very poor read. I know Chriss Kyle is an American Hero but as an author, he employed not one but TWO additional authors, and still the book is simply poor. Like it was written by a 12 - year old.
Click to expand...

Kyle had said he was giving all of his proceeds from “American Sniper” to the families of soldiers he couldn’t save in combat. He said he regularly received tearful calls and letters of thanks.

Is Joining the SEALs worth it anymore? Sad, Frustrated, and Confused