Rick Sallinger
Reporting(CBS4) LITTLETON, Colo. A veterans' group plans to stand guard around the memorial set to be unveiled on the Fourth of July in honor of a Navy Seal from Littleton until it is dedicated Wednesday. The statue of Danny Dietz holding a gun will remember his service after the 9/11 attacks and his death during an attack by Taliban fighters in Afghanistan.

There has been some controversy surrounding the statue since it depicts Dietz holding a gun. The veterans' group, Rolling Thunder, doesn't believe opponents would deface the statue, but are standing guard to provide protection and respect.

"Just to make sure nobody comes along and tries to deface it, tear down the fence or anything of that nature," said Don Marsh of Rolling Thunder.

Dietz's mother anxiously looks forward to the ceremony Wednesday and putting the debate behind her.

"Obviously it hurt, but my son died giving us the right of freedom of speech," said Cindy Dietz, Danny's mother.

The city of Littleton said support for the statue has been overwhelming.

"People from all over the United States contacted us," said Kelli Narde, a spokeswoman for Littleton. "Six-hundred were in support and 10 opposed to it."

Some opponents said the design of the statue with Dietz holding a gun is graphic and violent. Others called it real.

"The people here in Denver, frankly throughout the U.S. rallying to a cause such as this, has been very impressive, very impressive," said Dan Puleio of U.S. Navy Recruiting.

The secretary of the Navy and the admiral who is in charge of Navy Seals are among the dignitaries scheduled to be at the unveiling of the statue Wednesday. It is planned for 11 a.m. on the Fourth of July at Lowell and Berry in Littleton.

Boondocksaint375 said:
"Just to make sure nobody comes along and tries to deface it, tear down the fence or anything of that nature,"
Click to expand...

Please excuse my language but what SICK FUCK ! would want to do such a thing ?
"DJ" gave his life for his country and his Team mates, hes a hero and heroes are not to be vandalized.
L

Ravage said:
Please excuse my language but what SICK FUCK ! would want to do such a thing ?
Click to expand...

There are a shitload of people that would......

That is great to read!

Some opponents said the design of the statue with Dietz holding a gun is graphic and violent. Others called it real.

It is graphic and violent, because it is real.

Marauder06 said:
Some opponents said the design of the statue with Dietz holding a gun is graphic and violent. Others called it real.

It is graphic and violent, because it is real.
Click to expand...

You can read about Danny Dietz, and the battle where he died, in Marcus Luttrell's book The Lone Survivor.

Ravage said:
Please excuse my language but what SICK FUCK ! would want to do such a thing ?
"...
Click to expand...

Someone who wants a beat-down from a bunch of patriotic bikers ;)

Sad thing is, the statue probably will be vandalized at some point after the bikers leave.

RIP Danny, we will never forget.

Rest Peacefully SEAL.. I hope this memorial honors you for eternity...

Lord, please keep the likes of people that would deface this monument away, and please open their eyes to the reason this man, and many others like him, died. To provide them the security that they wrap themselves in every day, while thumbing their nose at the true warriors this nation holds dear.

And Danny, thank you for everything

Please excuse my language but what SICK FUCK ! would want to do such a thing ?
Click to expand...

Ravage, in case you weren't aware earlier this year there was a controversy because of the statue of Danny Dietz holding his weapon. Folks still sensitive about the local Columbine High School shooting were not happy about the weapon. However, as has been mentioned, the statue image came from a picture of Danny Dietz taken in the field.

I did not hear how the dispute over the weapon was resolved, but I assume that since it is depicted in the final version of the statue the controversy went away.

It is a beautiful statue, and a fitting memorial to a fallen hero.
RIP Danny Dietz. My thoughts and prayers out to his family and friends, and to the SEAL community...

LITTLETON - Brave, giving, passionate and full of life. That is how Danny Dietz's wife, Patsy, describes her husband.

The Navy SEAL from Littleton was killed two years ago while on a mission in Afghanistan.

He was one of 19 men who perished in the mountains in June of 2005, on a day the Navy SEAL community calls the deadliest in its history.

Patsy met her future husband at a barbeque in 2002. They married a year later.

"When I met him, he just took my breath," she told 9NEWS. "He was the most amazing person that you could probably ever meet."

From that moment on, the couple were inseparable. Both served in the military. Patsy was a pilots' secretary in the Navy. Danny was already part of the SEAL community.

"The longest I (had) ever been away from him, probably the longest, three months," Patsy said.

Then came Danny's first deployment to a war zone - to Afghanistan.

"He told me before he left to not cry and worry because he was going to make a difference out there and it was his time to make that difference," Patsy said.

Patsy said Danny lived for this type of a challenge. It was the way of the Navy SEALS.

"To them, they're invincible, nobody can take them down. That's the mentality that makes them different from everybody else," said Patsy.

Patsy said she knew anything could happen, and when it did, she knew Danny died trying to save others.

"He gave his last breath fighting evil out there," she said.

It's been two years since Danny was killed.

"He was my best friend, he was my role model, he was my life," said Patsy.

However, for Patsy, he's still with her every day, she still wears her wedding ring, carries his pictures and his dog tags in her wallet.

"Destiny took us from each other, it's unfortunate, but he will always be my husband. He was my first love and I will always carry him," said Patsy.

Patsy said her life is richer because she knew him.

"There is not one thing that I regret. Even the same day I got the news, the same day I buried him, I don't regret (anything). It just made me a better person and stronger," Patsy said. "He was an incredible man that did a great sacrifice for this state and for all of us. Not just for me and my family, but for the whole country."

Patsy was 23 when Danny was killed. She left the Navy in February before he was deployed. The 25-year-old now plans to go back to school full-time and major in marketing.

Good luck in life Mrs. Dietz...your husband will not be forgotten. 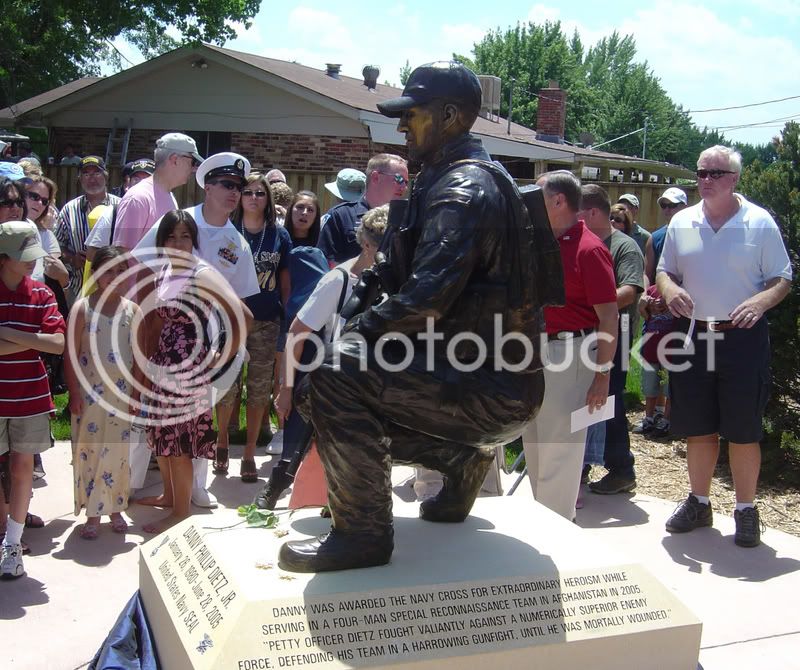 If anyone wants to fuck with this statue they can see me.


I'll cut your throat out with a knife and piss on you just for good purpose.


Rest easy Danny your watch is over and we've got the stern and the bow.

Rest in peace Danny Dietz. You will not be forgotten.

That is a beautiful statue. I am glad they did this memorial to honor him.