From the LA Times:

Thousands of U.S., British
and Afghan troops
moved to seize the Taliban
stronghold of Marja early
Saturday in what the Marine
general leading the assault
called a “big, strong and
fast” offensive aimed at challenging
the insurgency’s grip
on a key southern Afghan
province.
Rounds of tracer fire
lighted up a starry, predawn
sky as waves of troops, ferried
in by helicopters, descended
on the farming districts
that surround the
town. Transport and Cobra
attack helicopters also
dropped rounds to illuminate
the ground.
Troops initially met only
modest return fire from inside
Marja.
Sporadic firefights had
broken out throughout the
day Friday on the periphery
of Marja as Marine units
probed Taliban defenses.
The commander, Marine
Brig. Gen. Larry Nicholson,
had for weeks telegraphed
the military’s plans for the
offensive, one of the largest
since the war began in 2001.
The United States and its
allies hope the assault, the
biggest joint operation by
Western and Afghan troops
to date, will prove to be a
turning point in the conflict
with the Taliban and other
militants that have carved
out swaths of territory in Afghanistan.
Military leaders expected
about 7,500 coalition
troops to occupy Marja by
nightfall, with 7,500 more
supporting the mission from
elsewhere in the Nad Ali district
of Helmand province.
Marines, led by battalions
from Camp Pendleton
in California, Camp Lejeune,
N.C., and Kaneohe Bay, Hawaii,
attacked from multiple
directions in an effort to confuse
and overwhelm Taliban
fighters. Each Marine battalion
was paired with an Afghan
battalion.
The offensive is seen as a
test both of the fighting spirit
of the Afghan army and
the ability of the government
of President Hamid Karzai
— with the help of NATO
forces and a large corps of civilian
workers — to quickly
establish a working government
in Marja, a town of
about 85,000.

Britain hits grim milestone before major attack
Operation Moshtarak
Britains death toll in the conflict 256— above the number of Britons lost in the Falklands war of 1982.
Respect to all Allies involved.
[BBC image]

Best of luck to the lads over there.

+1. Also I am assuming with all the media attention over civilian casualties, everyone wants to reduce the probability of collateral damage. Even if that means not making contact with the enemy.
7

You mean you've got 15,000 guys & helos and vehicles burning millions of dollars in gas in Helmand for nothing more than a PR dog & pony show?

So what does everyone think of the decision to warn everyone in such advance? Good for the civilians, but plenty of time for the actual enemy to prepare themselves and get away (all while laying down some nasty surprises).

SAS and SEALs Take Out 50 Taliban

Merged to keep all Operation Moshtarak posts together.


The joint attacks with US special forces over the past two weeks have helped prepare the ground for the biggest battle in Afghanistan yet - when 4,000 British troops will go into action.

Special forces dealt the deadly blow to the Taliban by taking out scores of their top field commanders in the build-up to the massive offensive.

Their objective was to destroy the Taliban command structure - and military sources labelled the daring raids "a great success".

Precise details remain a secret but it is known that the elite forces spearheaded a "shaping operation" to soften-up the enemy before the biggest offensive since the conflict began in 2001 is launched.

Other British units have also been heavily engaged in the operations to disrupt the Taliban.

But the Taliban fled rather than fight, leaving booby traps behind.

The Grenadiers left the way clear for dozens of local Afghan National Army and police to flood in and begin the process of bringing security to the district.

Major Jim Green, one of the Grenadier officers who planned the shaping operation, told The Sun: "This phase was all about putting the insurgents on the back foot.

"The lads down there have done some incredible things. This has been a great success. It was an operation to free the local people from the Taliban's grip."

Meticulous planning stretching back weeks would have gone into the SAS raids which struck the first blow against the Taliban - and put fear in their hearts.

Patrols of around four men would have used the tried and tested "find, fix, strike" method to locate and destroy their prey.

Their tactics are veiled in secrecy. But they would have moved by night, covering their tracks as they went. Then they would strike with lethal force before vanishing to seek new targets.

The full allied assault, labelled Operation Moshtarak, will involve up to 15,000 troops - at least 4,000 of them British.

Fighting in the Taliban- controlled Nad e-Ali area of Helmand is expected to be ferocious.

Insurgents have even hung from trees blood-stained uniforms discarded by British troops as a taunting warning.

Major Green said the presence of British troops alongside Afghan National Army soldiers in operations so far was welcomed by people living in the insurgent stronghold.

And when the big assault gets under way, a similar tactic will be used, with Our Boys and Afghan forces going in side by side.

This is the first time Afghan troops have been engaged with the international force on such a scale.

Commanders hope it will help reassure locals in Taliban hotspots that their ordeal is almost over.

So many helicopters and transport planes are now using the air base there that it is officially busier than Essex's Stansted Airport, an RAF officer revealed.

Squadron Leader John Parfitt is Senior Air Traffic Control Officer at the base.

And when the generals give the order for the big push to start, he and his colleagues will co-ordinate helicopter movements in and out of Camp Bastion.

He said: "We currently have more than 550 movements a day.

"And during the op we will see a surge in movements. It will be the busiest day of our careers."

He described the mood as "businesslike but confident".

THE Taliban's leader in Pakistan did die of wounds received in a US missile attack on his stronghold in Waziristan last month, Interior Minister Rehman Mali said yesterday.

Ruthless Hakimullah Mehsud, 28, was behind bomb attacks that have killed more than 600 people.

What dog and pony show? They are going to take and hold Marjah and deny the enemy a safehaven with minimal coalition force and civilian casualties. Why assault the machinegun bunker if you can convince the enemy to give it to you?

Whoa, that is the shit.

Free can take up the slack on that one, but personally I think it's ok.

Agreed. This has been on the go for some time. Third tread on this...not that I'm complaining.

Queens Cadet said:
Free can take up the slack on that one, but personally I think it's ok.
Click to expand...


I wouldn't be happy with it.. Already two have died from IED's that probably as Rapid mentioned left because of the prior notice..just my opinion.

Queens Cadet said:
Free can take up the slack on that one, but personally I think it's ok.
Click to expand...


I'm sorry, I don't get this line...some Commonwealth vernacular that I'm missing?

We can "what if" this whole thing (prior notice vs. a surprise attack) but we'll never know what the casualty figures for an all-out attack would be both in service members and civilians. What I'm curious about is: how many slipped out of the net and what blocking forces were in place, is this a "one off" scenario and then we revert back to surprise attacks, and then what next: how many Civil Affairs, TRAINED ANP/ ANA, and NGOs are arriving in Marjah as I type this? Great, we took a village, yay, throw a party or whatever.....but not only can we keep it, but can we build on it so that our success this week "infects" the surrounding areas? If we can't do that, then Moshtarak was a failure.

The operation is to clear the area of Marja, in the Nad Ali district of Helmand Province. When fully underway, it is expected to involve around 15 000 troops from 6 nations; the United Kingdom, the United States, Canada, France, Estonia, and Afghanistan. 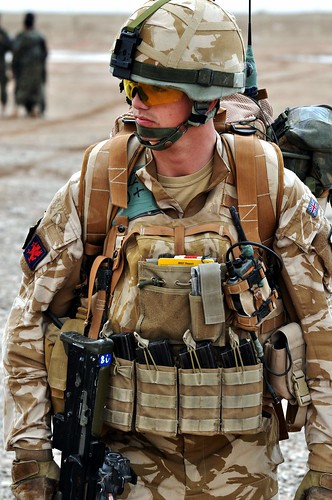 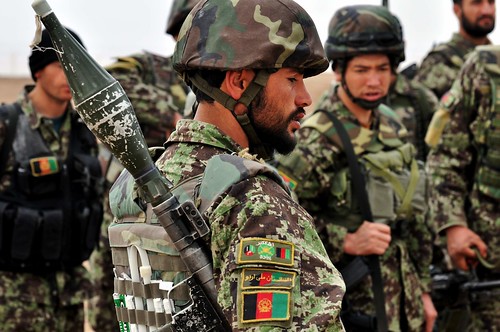 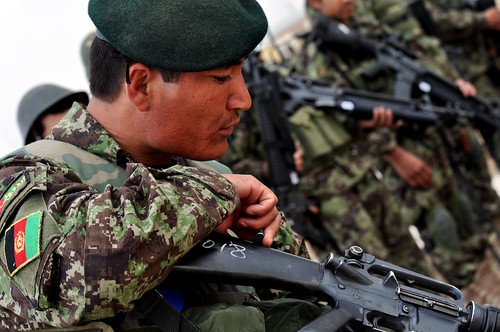 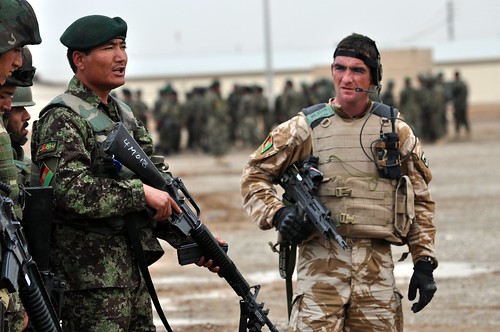 All above images are MoD releases of the troops preparing for the operation.[/QUOTE]

Teufel said:
What dog and pony show? They are going to take and hold Marjah and deny the enemy a safehaven with minimal coalition force and civilian casualties. Why assault the machinegun bunker if you can convince the enemy to give it to you?
Click to expand...


Yes, sir, I understand...I just thought hostiles being forewarned are free to go elsewhere and live to fight again; and holding ground--denying a safehaven--is only good if you can stay. With the terrain in Helmand it probably makes perfect sense, but I am naturally wary of the "enclave" strategy where blue forces occupy population centers and the enemy the hinterland.

BTW, apologies for yet another thread...I missed the others, my bad...

Good thread. Too bad I didn't find it B4 running my suck about the Marjah show up on the "General" forum.

Rapid said:
So what does everyone think of the decision to warn everyone in such advance? Good for the civilians, but plenty of time for the actual enemy to prepare themselves and get away (all while laying down some nasty surprises).
Click to expand...


While It is obviously better to attack without warning, in today's world with all the focus on avoiding civi casualties I think it's near unavoidable in a large operation like this.
I also don't think there is much chance of an attack like this remaining secret even if we wanted it to be so. :2c:

Britains death toll in the conflict 256— above the number of Britons lost in the Falklands war of 1982.
Click to expand...

How long did the Falklands War last? How long has the UK been fighting in the current war?

Why bring that up? Fucking media...

hope this works..Excellent piece from UK's Channel 4 on a patrol that gets contact..

Quoted from Teufel: "Why assault the machinegun bunker if you can convince the enemy to give it to you?"

Because they will not give it to you, they will escape into PK only to return after we give up ground. Wow... this is strangely familiar. What is the point? Our country has no idea how to fight anymore.

We telegraphed our punches as little as possible, and the few times that we couldn't help but do it, we had stuff set up a week prior so any shitbags rolling from the area would be spotted and handled.

If this seems to be a little disjointed it is because I've merged the threads .