THE wife of Sgt Brett Wood, who was killed in Afghanistan last night, says she has lost her best friend.
The 32-year-old Ferntree Gully man died when an improvised explosive device detonated in southern Afghanistan, an incident which also left two of his fellow Diggers seriously injured.
"On behalf of Brett’s immediate family, his friends and myself - I would like the Australian public to know what a brilliant husband, son, brother, friend and soldier Brett Mathew Wood was," his wife Elvi said in a statement released this afternoon.
"I have not only lost my husband, I have lost my best friend.
"The past six years with him were the happiest of my life and it was the biggest honour ever to become his wife and to be part of his family.
"Brett, you have done your country proud and you will always be remembered.
"I love you with all of my heart. Be in peace now."
Mrs Wood echoed the sentiments of Defence Force chiefs who hailed Sgt Wood's service record today, describing her husband as "an excellent soldier, a true leader and a friend to all in his unit".
Another mourning his loss is Lynden Twining, whose son, David, was Sgt Wood’s best friend in the early years of his army career.
The pair signed up on the same day, became mates on the bus to basic training at Puckapunyal and had consecutive soldier identification numbers.
The two men served together in 4RAR as Commandos, both did tours of duty in East Timor and had both started SAS training together.
In October 2001, David Twining was killed in a car accident near Holsworthy Army Base in Sydney.
“What broke my heart at David’s funeral was seeing Brett walk behind the hearse with David’s medals on a cushion,” Lyndel Twining told the Herald Sun.
“Now all I can think about is that some other soldier will have to carry Brett’s medals behind his hearse.
“I always thought wherever Brett is, that’s where David is as well. Now that Brett has gone, David has gone as well.”
She described Sgt Wood as “so good, so nice, a wonderful guy.”
“When I heard the name this morning I thought maybe its another Brett Wood, maybe there’s another Brett Wood in the army who won the Medal for Gallantry, but I guess not.
“We always heard from him at Christmas, on ANZAC day and on the anniversary of David’s death, every year. We didn’t hear much from him after he won the Medal for Gallantry, but we understood he just wanted to get on with his life.”
At 11pm (AEST) yesterday, a Special Operations team was conducting clearance operations in southern Afghanistan when an improvised explosive device (IED) detonated, killing Sgt Wood and seriously wounding two others.
Prime Minister Julia Gillard paid tribute to a "magnificent" soldier but says his death will not stop Australia from completing its mission.
The Prime Minister said the war has come at a "terrible price" but must continue because it is for the greater good.
She said Sgt Wood’s family would be in "immeasurable pain", and thanked all the soldiers and their families for their sacrifices.
"Our hearts go out to his family and friends as they seek to come to terms with their loss," Ms Gillard said.
"This is a difficult day for the nation."
Ms Gillard said there was progress being made in Afghanistan and Australia would not be perturbed from its mission.
"We are making a difference,” she said.
"We are there to ensure Afghanistan does not again become a safe haven for terrorists.
"We know it comes at a terrible price. We know it comes at the cost of Australian lives.”

Sgt Wood, who was a member of the Sydney-based 2nd Commando Regiment, joined the Army in 1996 and after recruit training joined the 6th Battalion of the Royal Australian Regiment.
He successfully undertook commando training before his first deployment to Bougainville in 2000. In 2001, he was deployed to East Timor on Operation Tanager and in 2003 to Iraq on Operation Falconer.
In 2006, Sgt Wood was deployed to Afghanistan as part of Operation Slipper and was awarded the Medal for Gallantry for leadership in action as a Team Commander.
The citation from the medal ceremony described Sgt Wood's actions on that day as being " testament to his leadership, fortitude and sense of duty to his team and the platoon".
Click here to read Sgt Wood's full Medal for Gallantry citation
Sgt Wood was deployed to Afghanistan for the third time in March this year.
In 2007, Sgt Wood was again recognised for his service as the emergency action commander in the tactical assault group.
Air Chief Marshal Houston described Sgt Wood as a “magnificent soldier who had some incredible operational experiences”.
"I am told that Brett was highly professional, dedicated and an exceptionally nice guy,'' Air Chief Marshal Houston said.
"Brett's loss will be deeply felt across Australia's special forces community as he was an inspirational leader and a popular and highly respected member of his unit.''
"He was also a decorated warrior."
Air Chief Marshal Houston offered his condolences to Sgt Wood's wife and said Defence would take care of her and offer her support.
"To the families of those wounded, I want them to know their loved ones are receiving the best possible treatment and will continue to act in their best interests as they recover.''
The two other soldiers injured in the incident in which Sgt Wood was killed were evacuated by helicopter and are being treated at a medical facility, with both listed as being "seriously ill".
In a separate incident, three Diggers were injured during an engagement with insurgents yesterday.
All three are receiving treatment and are expected to be released from hospital later today.
Air Chief Marshal Houston said all of the soldiers' families had been notified and further details of the incidents would not be made available as operations in the region were ongoing.
Defence Minister Stephen Smith described it as a “terribly sad day for our nation” and said Sgt Wood's death would also be a "terrible reminder'' for the families of other Australian soldiers who have died in Afghanistan.
Sgt Wood is the 24th Australian soldier to die in action in Afghanistan since 2001. Another 174 Australians have been wounded in action.
Mr Smith said the Defence Department had steeled itself for fatalities as the summer fighting season started “in earnest”.
"The Taliban has taken many reversals, we’ve always said that the big test for us would be when the fighting season came,” he said.
"While we have made progress in Afghanistan, we had to steel ourselves for further fatalities,” he said.
"We continue with resolve because we very strongly believe in what we are doing.
"We are seeking and helping to stare down international terrorism.”
Click to expand... 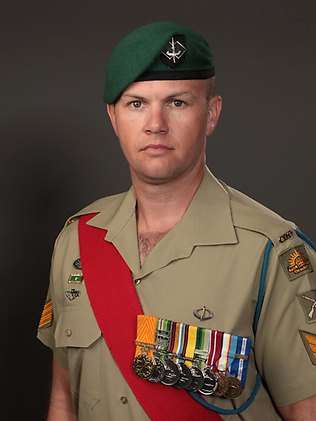 I served with Brett (and David Twining) back in the late 90's. He was a good bloke, highly respected and it was obvious to all of us that he'd do very well. Rest in peace mate.

Very sorry for your loss Digrar. May he Rest in Peace.

Very sorry for Your loss Dig.
May He Rest in Peace....

Sorry for your loss bro. R.I.P.

So very sorry to hear this. May they both rest in peace.

Sorry for your loss. RIP warrior.

Sorry for your loss Brother.. Rest in Peace Warrior.

May he Rest In Peace.

Sorry for your loss Brother.